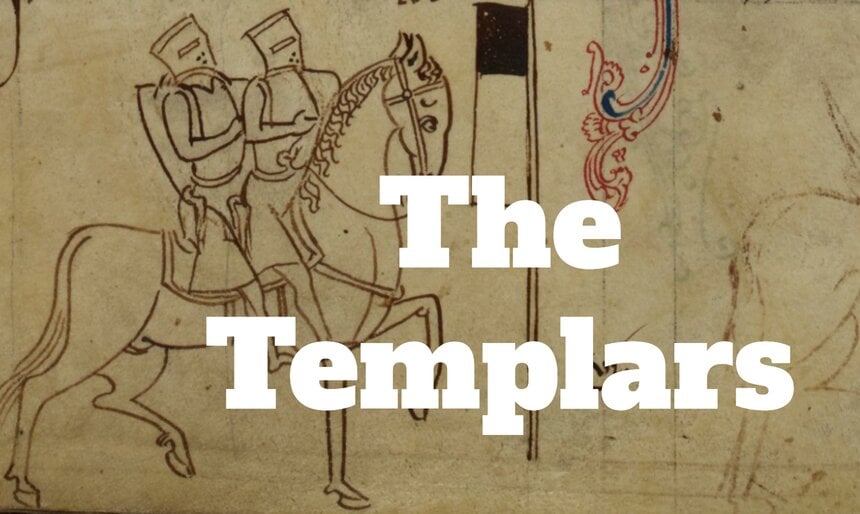 The Knights Templar existed for almost two hundred years, and were active across Europe and the Middle East. They would become an international force, using their wealth to gain political power and support military activities in the Holy Land. But there are a few things about the military order that are not so widely known. Here are our favourite facts about the Templars.

1. They assassinated an assassin

William of Tyre reports that in 1173 the King of Jerusalem had made an agreement with an envoy from the Nizari Ismailis, an Islamic sect popularly known as the Assassins. The Ismailis’ envoy proposed that his people would convert to Christianity and, in return, they would no longer have to pay an annual tribute of two thousand gold pieces to the Templars. After making the final arrangements with the king, the envoy and his men were about to return to their own lands “when suddenly some of the Knights of the Temple rushed upon the party with drawn swords and killed the envoy.” The deal then fell apart and the Ismailis became an enemy of the Crusaders. William believed that the Templars were more interested in keeping the money than gaining a new Christian ally.

While the Templar Rule demanded that its brothers keep women away, and forbade them from being members, scholars have been able to find scattered references to ladies who joined the order and lived with the men. For example, a woman named Berengaria of Lorach was the ‘soror’ of a Templar house in Catalonia, where her name appears in witness lists among those of the brothers, and she is recorded as giving counsel to the commander of the house.

3. They had a rule against bad breath

The Catalan version of the Templar’s Rule includes this:

4. One Templar was a ‘blood-brother’ of a sultan

Despite being on opposite sides, the Templar Matthew Sauvage and the Mamluk sultan Baybars were ‘blood-brothers’. They probably first met in 1261 when Matthew was a prisoner, and over the next couple of decades we have reports of the two men visiting each other several times, using their personal friendship to negotiate agreements and truces.

The penances imposed for sins or running afoul of Templar rules greatly varied. In one case a knight only had to suffer a punishment of no wine on Fridays, in another case one brother was whipped and made to recite the psalms. The penalty for another Templar who abandoned the military order and then returned was that he had to eat on the floor for one year.

6. They bought Cyprus, but then had buyer’s remorse

When King Richard the Lionheart sailed to the Holy Land to take part in the Third Crusade, he stopped at the Mediterranean island of Cyprus in 1191 and conquered it. However, a few weeks later the English ruler was in need of money to support his military campaign and decided to sell his new possession to the Templars. The sale price was 100,000 bezants, which historians have noted was a very good deal for the military order – that amount of money would have only covered the costs of 330 knights for a year. However, the Templars soon found out that they did not have the manpower to run the island, and their efforts at administration were angering the local Cypriots. On Easter Day in 1192, the island’s inhabitants rose up in rebellion and tried to massacre the Templars in Nicosia. It ended with the Knights slaughtering the Cypriots, but afterwards they realized that they could no longer rule the island. The military order went back to King Richard and asked him to void the deal. Fortunately, another buyer was available – Guy of Lusignan, who had just been deposed as King of Jerusalem. He became the new King of Cyprus, with his descendants ruling the island for the next three hundred years. We do not know if the Templars ever got their money back.

7. They had a side-business transporting pilgrims

Many medieval Europeans wanted to take part in pilgrimages to the Holy Land, and there was much competition to offer them transport across the Mediterranean Sea. The Templars (and the Hospitallers) made a deal with the authorities from the French port of Marseilles that they could take up to 1500 pilgrims on their ships twice a year.

8. They were a money-transfer service for the Kings of England and France

By the 13th century the Templars had a reputation for being excellent financial managers, and the kings of both England and France relied on them heavily as their bankers. Deposits, money-lending and even tax collection were handled by the order. They even handled money-transfers between the kings.

9. They fought the Mongols

When Mongol armies invaded Eastern Europe in 1241, the Templars were there to fight them. According to one chronicle about the Battle of Mohi, which took place in Hungary on April 12th of that year, a Templar master named James of Monte Regali was one of the leaders of the Hungarian side. He and “his fellow Latin knights wrought great slaughter among the enemy”, but eventually “they were unable to sustain the overwhelming numbers” and were all slain.

Around the year 1340 the German pilgrim Ludolph of Sudheim was travelling through the Holy Land when he came to the shores of the Dead Sea. He writes:

The two men, who were from Toulouse and Burgundy, were set free a year later and with their wives and children travelled back to Europe, where they met with the Pope. Afterwards they joined their fellow brothers in retirement, almost thirty years after the Templars were officially disbanded.

This article was first published in Medieval Warfare magazine Issue VI:5 – you can buy that issue here. You can also get new issues of the magazine through our Patreon – click here to learn more.