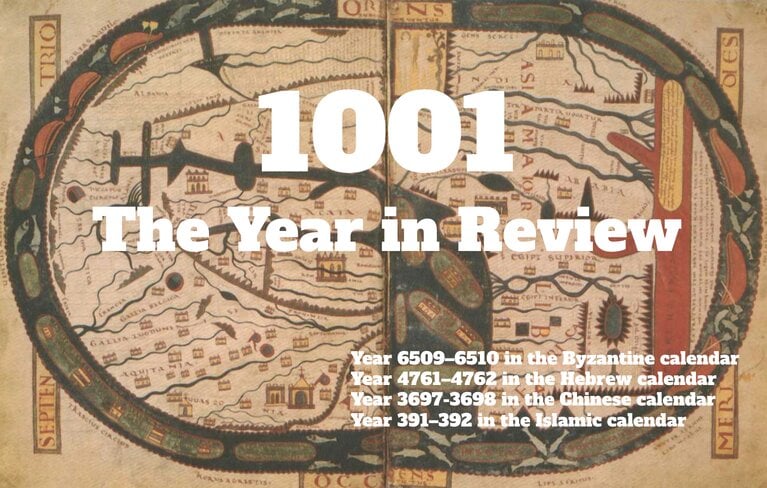 Looking back at the year 1001 – reviewing the important events, people, and accomplishments that took place. This particular year had a major battle in central Asia, the arrival of Norse explorers in North America, and the beginning of construction for one of the tallest buildings of the Middle Ages.

The Battle of Peshawar

The emergence of Sultan Mahmud of Ghazni as the ruler of the Ghaznavid dynasty, based in modern-day Afghanistan, would lead to growing tensions with the neighbouring Shahiyas, who were centred in Punjab. This would lead to Mahmud launching an invasion that targeted the city of Peshawar. According to Tarikh Yamini, which was written by a Ghaznavid official, Mahmud’s army of 15,000 cavalry camped near the city, where the Shahiyas ruler Jayapala was based with a force of 12,000 horsemen, 30,000 foot soldiers, and 300 elephants. Mahmud would launch an attack on the morning of November 27th. The Tarikh Yamini describes the fighting:

The elephants moved on from their posts, and line advanced against line, shooting their arrows at one another like boys escaped from school, who, at evening, shoot at a target for a wager. Swords flashed like lightning amid the blackness of clouds, and fountains of blood flowed like the fall of setting stars.

By noon the battle was over, with the Ghaznavids victorious and Jayapala captured. 15,000 of the Shahiyas were killed in the fighting, along with 15 elephants. Jayapala would be ransomed in exchange for 50 elephants, but he would then, to redress the humiliation of his defeat, would abdicate in favour of his son and then cast himself into his own funeral pyre. As for Mahmud of Ghazni, this would begin many military campaigns into the Indian subcontinent as he established the Ghaznavids as a major force in central Asia.

A Greenlander named Leif Erikson is said to have sailed to the northeast coast of in this year – depending on a reading of the sources it may have also happened in the year 1000. According to the Saga of Erik the Red he was returning to Greeland after spending time in the court of the Norwegian king Olaf Tryggvason when his ship was blown off course, and:

Finally came upon lands whose existence he had never suspected. There were fields of wild wheat growing there, and vines, and among the trees there were maples. They took some samples of all these things.

However, another Icelandic saga, The Saga of the Greenlanders, reports that Leif had learned of the existence of lands west of Greenland from Bjarni Herjólfsson, who had spotted these lands years earlier. They had met in Norway and Leif Erikson bought Bjarni’s ship and with a crew, set out to explore these lands. The ship would explore several areas and make landfall. Erikson named these lands Helluland (believed to be Baffin Island) and Markland (Labrador). Afterwards, the ship reached a small island, possibly Belle Isle near Newfoundland. From here, Leif and the crew established a temporary camp so they could stay over the winter.

Al-Muqallad ibn al-Musayyab, the Emir of Mosul and ruler of the Uqaylid dynasty, attempted to seize control of Baghdad in the early days of the year 1001. In previous years he had expanded his domain, which spread over present-day northern Iraq and Syria, and was now hoping to remove Buyid control over the Abbasid capital. However, while negotiations were taking place between the emir and the Buyids, Al-Muqallad was assassinated by one of his own soldiers on January 22nd. In the aftermath, Al-Muqallad’s son Qirwash tried to take control of Uqaylids, but had to settle for a power-sharing agreement with his uncle. Meanwhile, Baghdad remained under Buyid control.

In January Otto III made a new agreement with his friend and supporter, Pope Sylvester II – the emperor gave control over the eight Italian counties to be part of the Papal States. At the same time, a revolt had broken out in Tivoli, a city near Rome, against Otto’s rule. The emperor briefly laid siege to the city, but once it surrendered, the rebels were not punished harshly.

However, these actions seemed to have been the cause for another revolt to break out, this time in Rome itself. According to the Vita Bernwardi:

Now the Romans, indignant that the emperor had reached an agreement with the people of Tivoli, closed the gates of their city and barricaded the streets. They did not allow people to enter or leave Rome freely, and also forbade the free buying and selling of goods. Some of the king’s friends were unjustly murdered.

Negotiatons between Otto, Pope Sylvester, and the citizens of Rome were then started, and an uneasy peace emerged. However, Otto’s advisors persuaded him to leave the area and go to Ravenna. For the rest of the year, the emperor remained away from Rome, and it seems that he was planning to have soldiers sent from his German territories to reinforce him.

In another development involving Otto III, his ambassadors in Constantinople, led by Archbishop Arnulf of Milan, finalize a marriage alliance with the Byzantine emperor Basil II. They agreed that Otto would marry one of the daughters of Basil’s brother and co-emperor Constantine VIII. As Basil himself had no children, and Constantine no sons, this marriage had the potential of bringing together both the Byzantine Empire and the Holy Roman Empire under the same family. Otto’s ambassadors and Zoe then prepared to make a voyage to Italy to complete the marriage.

This year marked the beginning of the construction of the Liaodi Pagoda in the southern Chinese city of Dingzhou. It would take another 54 years to be finished, but once completed, the Liaodi Pagoda was one of the tallest man-made structures ever built, rising to 84 metres (276 feet). The Song Emperor Renzong intended this site to house a set of Buddhist scriptures.

On January 13th, Fujiwara no Teishi, Empress consort of Japan, died during childbirth. This also ended a situation where Japan’s emperor had two empresses, the result of political machinations by Fujiwara no Michinaga, the unofficial regent of the country.

On March 17th, a delegation from Butuan, a kingdom in the Philippines, arrived at the Chinese Imperial Court to offer tribute and establish relations. This is one of the first historical references to a state in the Philippines found in Chinese records.

On May 12th, a Byzantine envoy arrived in Cairo, and in meetings with Caliph Al-Hakim, a ten-year truce was agreed between Byzantium and the Fatimid Caliphate. Basil II now begins military campaigns against Bulgaria.

The Year 1000: When Explorers Connected the World―and Globalization Began, by Valerie Hansen (Scribner, 2020)

The Vinland Sagas: The Norse Discovery of America, translated by Magnus Magnusson and Hermann Palsson (Penguin, 1965)