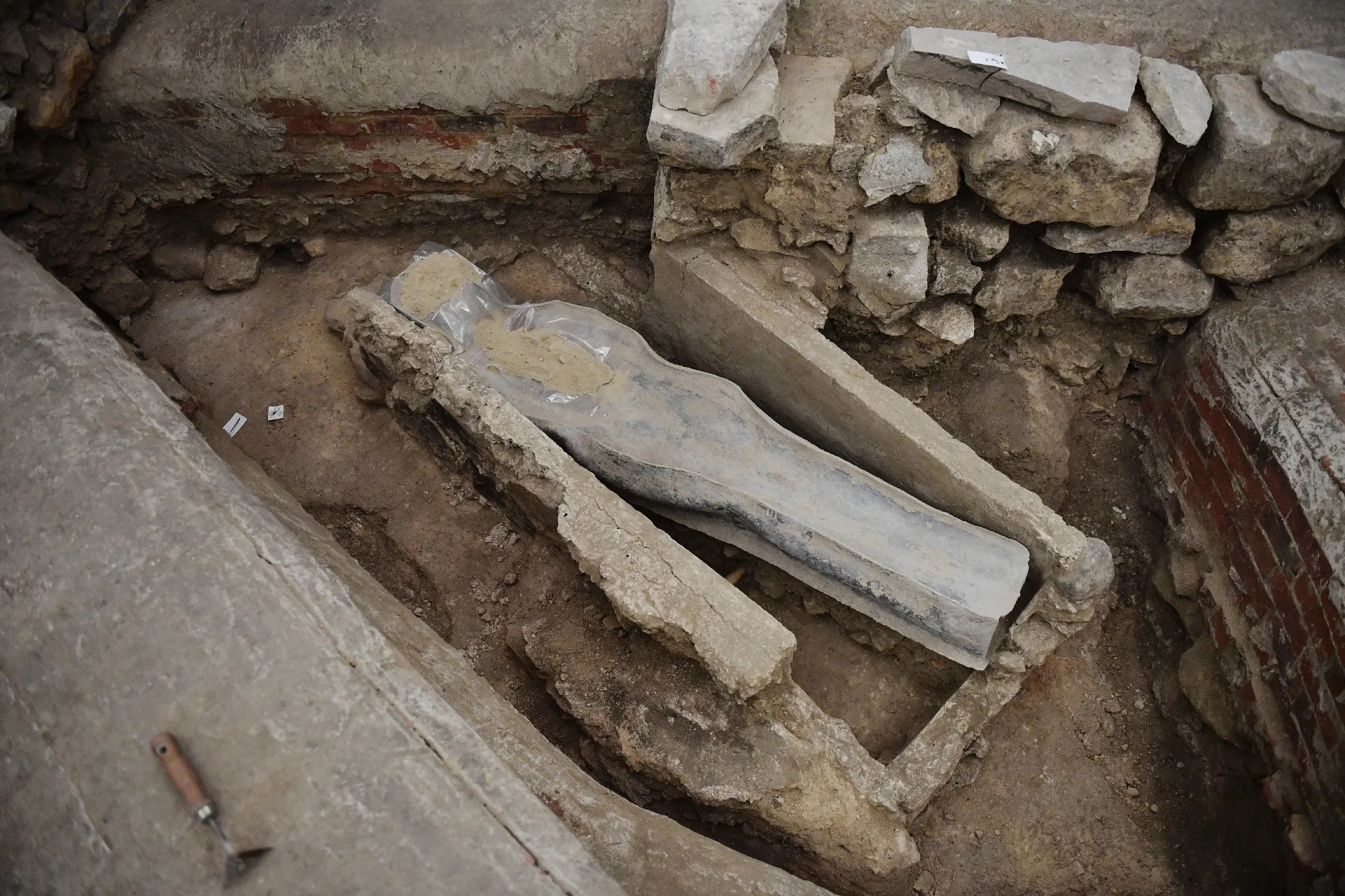 A lead anthropoid coffin from the 14th century has been discovered under Notre-Dame de Paris. Archaeologists unearthed the sarcophagus in the very heart of the cathedral where the transept and nave intersect, so the individual buried there must have been someone of importance, likely a church dignitary. Notre-Dame was the final resting place of several prominent individuals, but this is the first time a well-preserved intact sarcophagus has been found.

The area is being excavated archaeologically prior to the installation of massive scaffolding 330 feet high that will be used in the reconstruction of the spire that was so wrenchingly burned to the ground in fire that devastated Notre-Dame on April 15th, 2019. Archaeologists and scientists dug under the nave-transept intersection point to ensure the ground and subground are structurally sound enough to support the spire during and after construction.

pipes from the 19th century. Apparently they added the pipes working around the sarcophagus. The soft lead had been dented by the weight of soil and stones on top of it, but it is overall in excellent condition. A mini endoscopic camera threaded into the sarcophagus confirmed that the contents are as well.

“You can glimpse pieces of fabric, hair and above all a pillow of leaves on top of the head, a well-known phenomenon when religious leaders were buried,” said Christophe Besnier, the lead archaeologist.

“The fact that these plant elements are still inside means the body is in a very good state of conservation,” he added.

Its discovery will help improve our understanding of funeral practices in the Middle Ages, added Dominique Garcia of the National Institute of Archaeological Research.

A few feet away from the sarcophagus at the foot of the choir, archaeologists discovered the broken remains of the old rood screen, the partition between the chancel and nave that was a common feature in churches of the late Middle Ages. Notre Dame’s rood screen was carved of stone and featured numerous statues painted in bright colors. It was built in 1230 and remained in place until the early 18th century, even though rood screens fell out favor in the mid-16th century when the Council of Trent required that Mass be made more accessible to the congregation. A heavy physical barrier blocking worshippers’ view of the altar was no longer on policy.

The screen was demolished, but it seems the crew did not believe in a keeping a clean workspace because archaeologists have found numerous fragments of stone from the screen, and larger pieces including the head of bearded man, vegetable accents and two clasped hands.