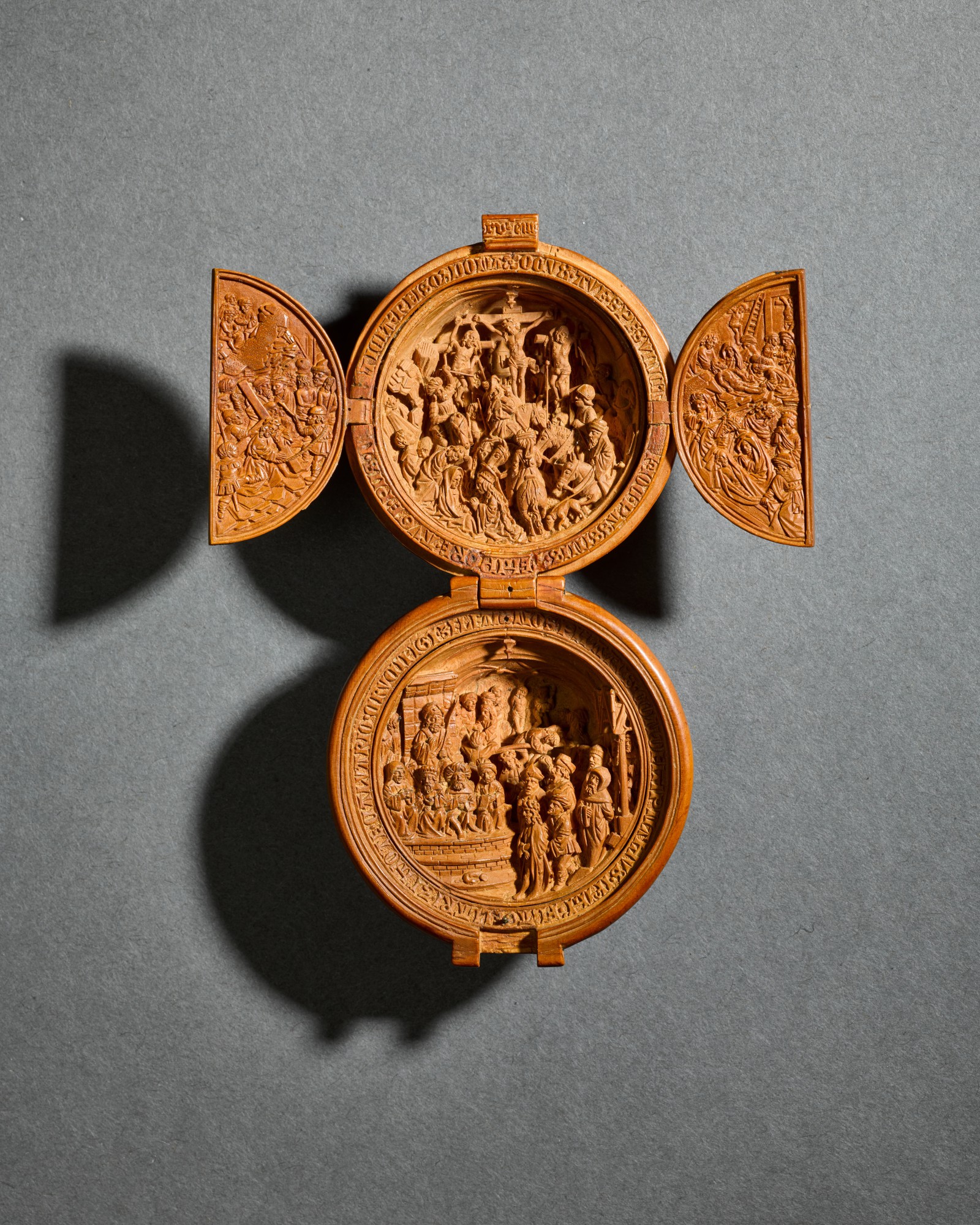 One of the rare 16th century miniature boxwood carved prayer beads that was displayed at the groundbreaking 2016 traveling exhibition Small Wonders: Gothic Boxwood Miniatures sold for six times its presale estimate at a Sotheby’s London auction on Tuesday. The intricately-carved masterpiece was estimated to sell for £60,000 – 80,000 (S72,000 – 96,000), but bidding quickly blew past those figures and the prayer bead ultimately sold for £604,800 ($726,000).

The polyptych prayer nut was carved in the northern Netherlands in the first quarter of the 16th century. It is attributed to the workshop of Adam Dircksz and is a particularly splendid example of a very short-lived art form. Barely more than two inches in diameter when closed, it is a hinged sphere carved from a single piece of boxwood. The exterior is decorated with layered open tracery. When open, the two interior hemispheres are deeply carved with scenes crammed full

of people in dynamic postures. The top register depicts the Crucifixion of Christ; the bottom half depicts Christ’s trial before Pontius Pilate with tiny scenes of the Flagellation and Christ Bound in the background of the deep relief.

Two semi-circular wings close over the top half. They are carved in low relief on both sides. The exterior of the wings features a scene of Judas betraying Jesus with a kiss. The interior of the wing shows Christ carrying the cross, the Lamentation and the Entombment.

This was a pater noster prayer bead. The owner would recite the Our Father while touching the complex openwork tracery to aid in focus, then open up the hemispheres to meditate on the scriptural passages and hymns carved around the edges and the devotional scenes on the interior. It was likely worn on a belt or a large rosary.

Of the 60 or so surviving prayer nuts, only 11 of them have interior wings,

and they are in museums, including one in the collection of the Metropolitan Museum of Art which is almost identical in motif and design. It too is carved with a scene of the Crucifixion in the top half of the bead and Jesus before Pilate in the bottom half. The one that just sold came from a German private collection. They basically never come up for auction, making this one extra covetable and driving up the price.