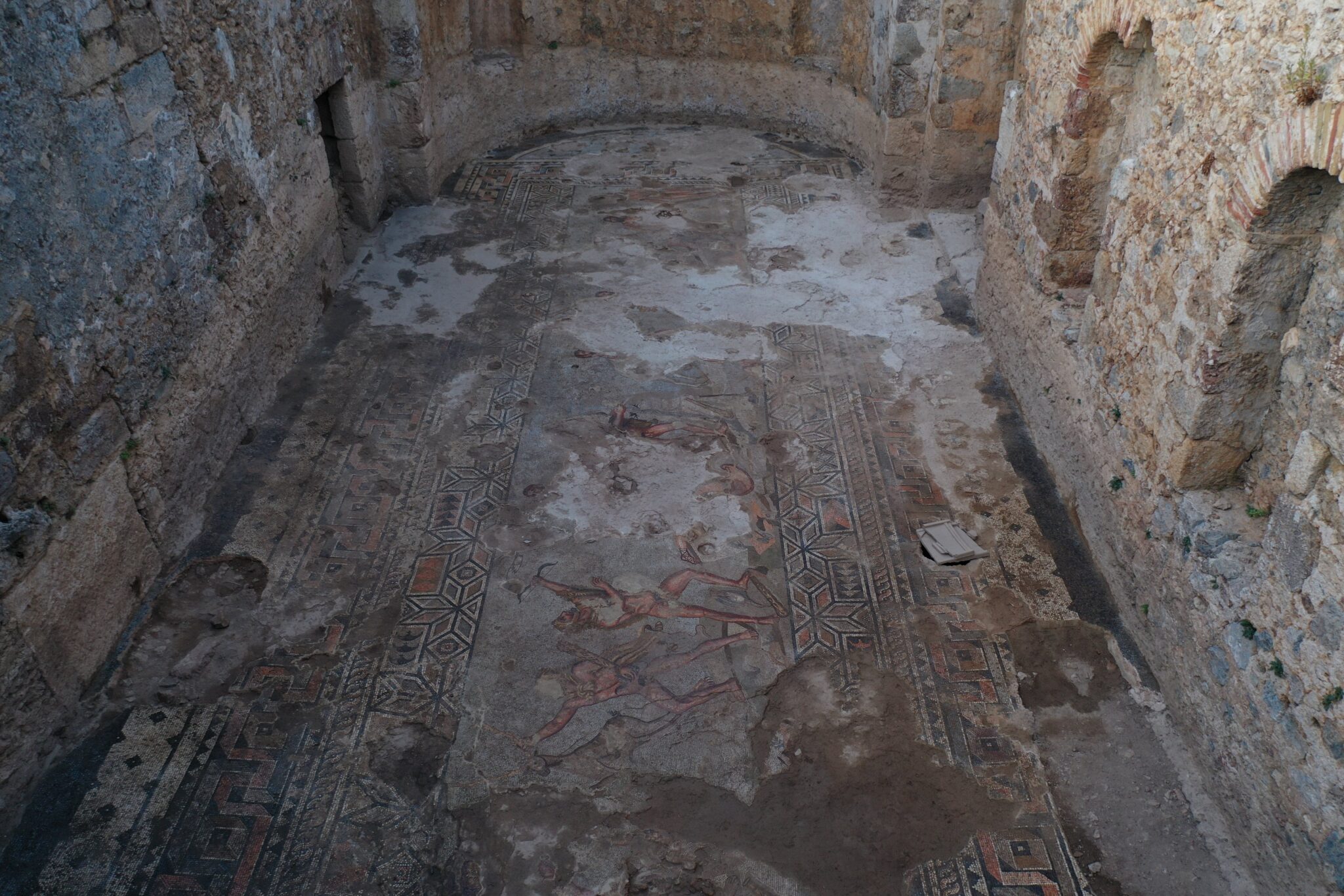 Archaeologists have discovered a 1,765-square-foot floor mosaic depicting the 12 Labours of Hercules in the Roman baths of the ancient city of Syedra on the southern coast of Turkey. It dates to the 2nd century A.D. and is unique for the life-sized dimensions of the human figures. Every one of Hercules’ contests against an assortment of man-eating creatures and enormous quantities of cow manure get a scene in the mosaic, although some parts were destroyed in antiquity. The sections that remain are in good condition.

The mosaic was first unearthed in 2019, but the excavation was not completed at that time and the art work was reburied for its protection. The excavation resumed in late 2020 and the full extent of the mosaic revealed, 26 feet in width and 72 feet in length. It fills a rectangular room with a semicircular recess at one end like an apse. This design is typical of the caldarium (the hot room) in other baths.

Syedra was founded by Greek colonists in the 7th century B.C., but first makes an appearance in written records in the 1st century as the location of Pompey’s final war council in 48 B.C. The epic poet Lucan and the historian Florus mention his stop-over in Syedra, “on a lonely rock in Cilicia,” where

he met with the handful of senators who still stuck by him after he was defeated by Julius Caesar in the Battle of Pharsalus. The topic of discussion was whether Pompey should go to Egypt or Parthia to seek sanctuary and support against Caesar. According to Lucan, Pompey wanted to go to Parthia, but was browbeaten by Lucius Cornelius Lentulus into going to Egypt instead and securing the aid of boy king Ptolemy XIII. Pompey had barely set foot on Egyptian shores when Pompey had him killed and decapitated in a doomed attempt to curry favor with Caesar.

The small port city rose to greater prominence in the 2nd century. It sided with Emperor Septimius Severus against Pescennius Niger, governor of Syria, in the latter’s attempt to overthrow Severus in 193 A.D. When Severus crushed Niger at Issus in May 194 A.D., he punished the cities who had supported Niger by removing their privileges and titles while rewarding his own supporters (or former opponents who hurriedly shipped him enormous sums of appeasement money). In the 1990s, an excavation unearthed fragments of a stele inscribed with a letter from Septimius Severus wrote to the loyal people of Syedra in the second half of 194. Now on display in the Archaeological Museum in Alanya, the reconstructed stele reads:

Imperator Caesar Lucius Septimius Severus Pertinax Augustus, Pater Patriae, Pontifex Maximus, in the second year of his tribunician power, imperator for the fourth time, consul for the second time, proconsul, to the magistrates, council and people of the Seydrans, greetings.

How much zeal you displayed in resisting the attack of those impious and godless men who, using Super [an officer of Niger’s] as their guide to the route, turned aside to your city too, I previously learned and praised you for your perseverance. However, Super has already incurred his due punishment, having paid for the wrongs he committed against you, and the centurions who, you say, also accompanied Super will not escape unpunished either.

But it is fitting that you, since matters have gone as they have, and your fellow citizens who at that time were forcibly torn from their ancestral city [ie, conscripted into Niger’s army] but have now for the time being returned and are residing with you, should sacrifice and feast and take pride in the acts of bravery that you previously performed, reflecting that you have made yourselves more glorious by such actions, and that you have confirmed your already existing goodwill towards the Romans.

The city reached its peak of prosperity during this time. New defensive walls were built, as was the great public bathhouse, a temple, water cisterns and a theater. The population rose to about 5,000, which was a lot to fit on a lonely rock in Cilicia, but still rather petite by Roman urban standards. Its richly-appointed baths are a testament to how much wealth was passing through even so small a city when it was in imperial favor.