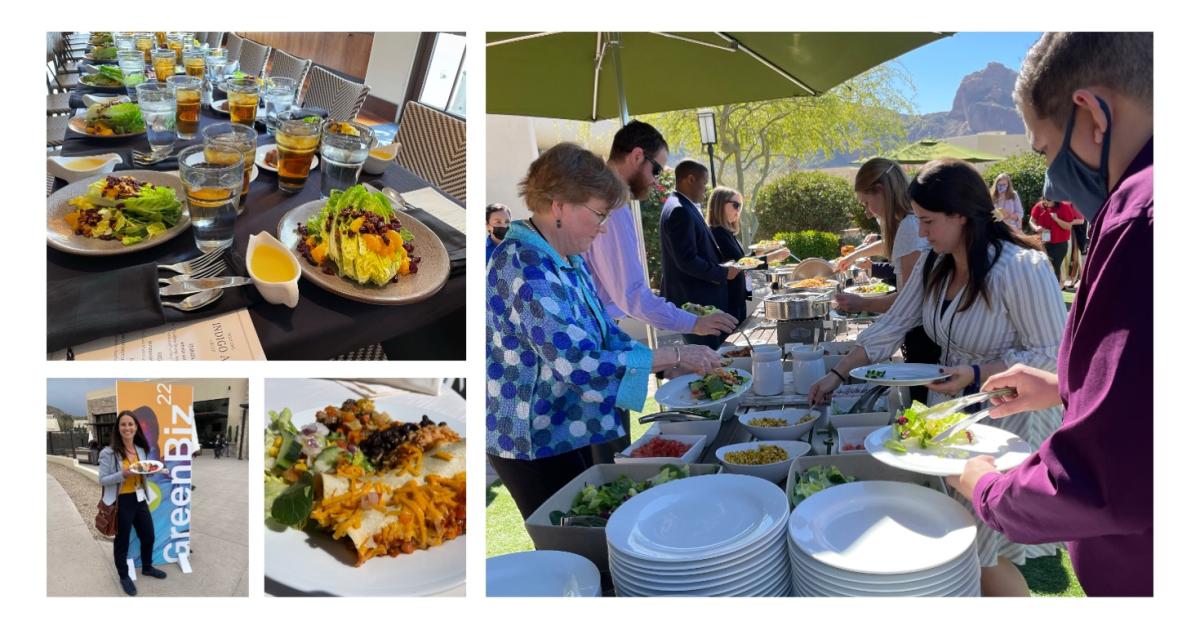 Last week, we hosted our first conference with mostly plant-based menus. We’re not the pioneers of meatless events — the Oscars and Golden Globes already did it in 2020. But serving animal products is still common practice at conferences. Even events focused on sustainability and climate rarely take a close look at the environmental impact of their menus.

So — as glamorous as GreenBiz might feel to us — we were a little nervous about how the practice would fare at a large event that isn’t backed by Oscar-style chefs and budgets. After all, vegan and vegetarian cuisine only gets a side note in most chefs’ training. But it turned out to be totally doable. Here are three lessons we learned in our first run.

Many people were grateful for that change. Countless attendees thanked us for setting a good example with our food policy of serving 75 percent vegan and 25 percent vegetarian meals. Most of them aren’t vegetarians or vegans, but they appreciated a chance to experiment with a different diet for a few days and take home new ideas to their families.

I enjoy meats, but it was a worthy exercise in demonstrating what can be done to have enjoyable food without it.

As Paul Overby, owner of Lee Farms in North Dakota, who spoke about his experience with regenerative agriculture at the conference, wrote to me this week: “I enjoy meats, but it was a worthy exercise in demonstrating what can be done to have enjoyable food without it.”

Not everyone agreed, of course. To some people, an enchilada without chicken just wasn’t the same. Others wished we had tried to source more sustainable meat or organically grown food instead. We welcome that constructive criticism but also saw it met with overwhelmingly positive feedback at large.

Next to the feedback received on both ends, it’s also worth noting that many (perhaps most) people don’t care enough about the food at a conference to comment on it. It’s not why they’re attending. They’re fine with it as long as it tastes decent and doesn’t run out. So why not take advantage and serve climate-friendly meals?

Second lesson: A supportive venue is everything

We didn’t pick our venue based on its vegan cooking reputation. GreenBiz has taken place at Marriott’s Camelback Inn in Scottsdale for many years. But we were lucky enough to find their team excited to collaborate with us, which was essential for success.

Jack Strong and Gustavo Villalobos, executive chefs at the Camelback Inn, are excited to be on this new culinary learning journey. While this was the resort’s largest mostly plant-based event to date, the chefs could draw on experience from hosting a vegan lunch for over 1,000 guests last fall. They’ve also seen increasing demand for vegan food over the past few years, estimating that about 10 percent of their event guests request such meals.

Strong and Villalobos both have Native American roots, frequently eating traditional plant-based meals when growing up. This manifests in their kitchen today. “We try to pair a story with the food whenever we can. I like to tell guests about the three sisters — the Native combination of corn, bean and squash — or quinoa as our mother grain that is also a complete protein,” Strong said. In his recipes, he mostly leans on traditional whole-food plant proteins.

Villalobos, on the other hand, is more interested in “new school vegan food,” as he calls it, drawing on the many plant-based meat, egg and dairy substitutes available. This doesn’t always work out at first try. One of the less popular meals at our conference was a vegan chicken breast which he hadn’t used before. Next time, Villalobos will try pairing it with a different sauce or making a breaded version of it. “As with other foods, it’s about making sure you find the right flavor profile and also look at the texture and crunch of each dish,” he said.

Here’s a reminder: Even within the sustainability profession, the average person has not spent the last decade experimenting with vegan and vegetarian meals. It’s still unfamiliar terrain and can be a little uncomfortable.

Combining this with the learning curve many culinary teams find themselves on means that not every vegan dish will resonate with people. While most meals at GreenBiz 22 were tasty, attendees weren’t fans of that chicken. A breakfast tofu scramble didn’t score a lot of points either. For these occasions, I was glad that we had a vegetarian backup at the buffet, even if it was just a simple serving of scrambled eggs. We also had a partnership with Copia in place for any leftovers, through which we donated 746 meals to local communities.

Let’s remember to gently bring people along when it comes to diet shifts. When turning on the light switch after signing on to a renewable energy contract, the user experience hasn’t changed. That’s unfortunately not the case when it comes to most low-carbon meals. Here, the end product looks and tastes different, making adoption more difficult.

This doesn’t have to be the case forever. Chefs will polish their vegan cooking skills. Alternative protein startups will continue to bring tasty replacements to the market and prices will keep falling. With time and positive experiences, consumers’ palates will adapt to plant-based meals. Perhaps the carbon footprint of some meats will decrease enough to reintegrate them. But until we get there, event organizers will fare well with keeping some scrambled eggs at hand.