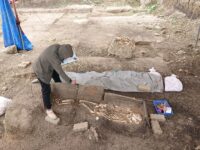 The site was discovered in 2017 during a renewal project to convert the crumbling shopfronts in Eluanbi Park into new green buildings. Contractors stumbled onto human remains, some in slate coffins, and shell tools buried close to the surface and work was stopped while archaeologists from National Tsing Hua University’s (NTHU) Institute of Anthropology surveyed the site.

Between 2019 and 2021, the team unearthed a large number of relics and artifacts, including 51 skeletons, 10 of which were buried in slate coffins with coral funeral objects, [Chiu Hung-lin, NTHU Institute of Anthropology associate professor] said.

Among the findings were several finished and unfinished shell tools, as well as relics that indicated it was a site for making those tools, which provided proof that the early inhabitants of Eluanbi used “unique” shell-crafting techniques, Chiu said.

The site also offered insights into the funeral customs of the people in those times, he said, adding that anthropologists could also make new discoveries by studying the human remains found at the site.

The processed shell finds range widely in design and function. There are practical tools like a shell adze used for cutting, as well as ornaments like shell and shark tooth pendants. The presence of intermediate stages — semi-finished objects, blanks — and processing waste is evidence of an extensive manufacturing operation.