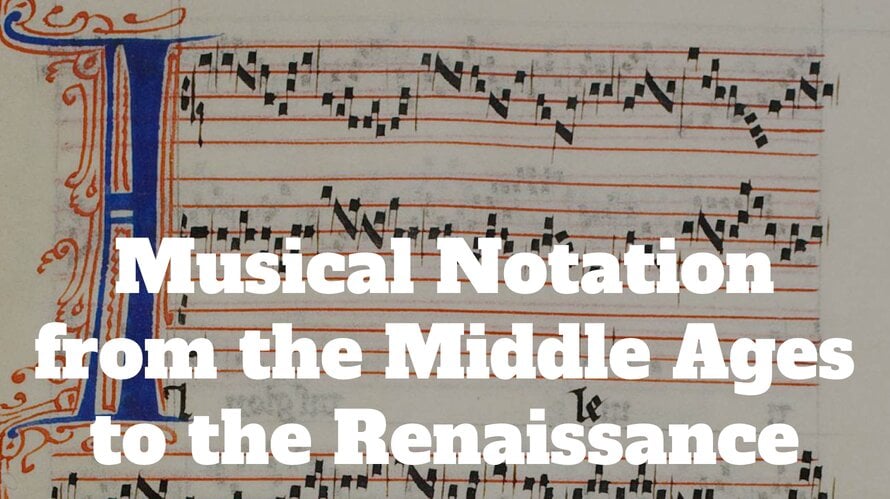 Today, many musicians are familiar with the well-established notation system, styles, and genres associated with Western art music. It can be easy to take for granted our current experiences of musical notation that includes precise pitches and rhythms; however, there was a time in the history of Western music when notation was in its infancy, and the system with which we are currently familiar looked and functioned very differently than it does now.

While musical notation continued to develop in the later centuries following its outset, some of the greatest advancements in recording pitch and rhythm occurred during the Middle Ages to the beginning of the Renaissance. This article will explore the evolution of musical notation from some of its earliest medieval forms to its use in Renaissance motets. Additionally, developments and differences between the medieval motet and the Renaissance motet will be explained.

The story of Western notation begins with the singing of plainchant. Certainly, there were various attempts to notate melodies during Antiquity; however, the root of musical notation as we currently use and understand it emerged in the ninth century with the development of symbols called neumes.

In the medieval church, plainchant was the principal music of the mass, and prior to the development of notation, clergy learned the many different melodies that were sung during the liturgical year by listening, practicing, and remembering. Essentially, chant was learned and transmitted as an oral tradition. Prior to Charlemagne’s rule, there existed many types of chants that belonged to different liturgical traditions throughout Europe. For example, Mozarabic chant was the prevailing liturgical song of what is now Spain, and Ambrosian chant was practiced in Milan. When Charlemagne sought to unite his territories with one liturgy, it was deemed necessary that liturgical chant be uniform. The result of this desire for musical uniformity was Gregorian chant, a combination of the sacred song traditions belonging to Rome and the Franks.

As Charlemagne expanded his territory through conquest, Gregorian chant was transmitted to new locations; however, since chant was taught orally, a more reliable means of transmission was required to ensure stylistic conformity and melodic accuracy. Fundamentally, the earliest forms of Western notation were born of a need to accurately propagate Gregorian chant.

The progenitors of Western notation were neumes (what we would now refer to as “notes”) classified as “adiastematic;” that is, symbols that outlined the general contour of a melody but were written without indicating a precise corresponding pitch. For example, symbols were placed above a text that would serve as a visual reminder of when a melody ascended or descended; but, unlike present-day notation, rhythm and exact pitch were not provided. Essentially, these neumes were memory aids for singers to remember melodies that they had already learned. Thus, the earliest forms of notation relied on a combination of oral transmission and adiastematic neumes to help with teaching and learning music (the ability to learn an entirely new melody solely by reading notation at this point was not yet possible).

In the early eleventh century, pitch accuracy was improved through the development of the musical staff. While today, the staff consists of five horizontal lines upon which notes are arranged to indicate exact pitch, in the Middle Ages, the earliest form of the staff had four. Significant developments to the staff are credited to an eleventh-century Italian monk named Guido d’Arezzo, who penned one of the most influential musical treatises of the Middle Ages titled Micrologus (c. 1025/1026). Staff notation provided a more reliable means of chant transmission due to its capability to record notes that indicated specific intervals (the distance between notes), thereby allowing singers to learn previously unfamiliar chants; however, as noted by musicologist Richard Taruskin, the improved notation did not negate learning melodies through oral tradition and memorization; both, in fact, continued to be integral components of musical learning alongside written notation.

In extant medieval chant manuscripts, staff notation is written in a style that musicians refer to as “square notation” due to its distinctive squared appearance that distinguishes it from modern notes that are rounder in shape. Square notation evolved from earlier notation styles, specifically, as musicologist Margot Fassler has explained, from early French neumes. A few examples of square notation neumes are as follows:

1) Punctum is a single note that is sung to one syllable.

2) Podatus consists of two notes (written with one on top of another). The lowest of the two notes is sung first and the second note is sung in an ascending direction.

4) Torculus consists of three consecutive notes. The first note is followed by one higher note which then descends back down to the initial note.

While this notation allowed for greater precision in singing pitches than adiastematic neumes, rhythm was not yet recorded effectively; however, in the late twelfth to thirteenth centuries, the development of the rhythmic modes made the notation of rhythms in conjunction with melodies feasible.

The rhythmic modes were developed within the Notre Dame School and were based upon Ancient Greek poetic meters. There were six rhythmic modes, each of which consisted of distinct rhythmic patterns that were conveyed by combining different groups of notes called ligatures. When musicians read these note combinations, they knew which specific rhythmic pattern was to be sung.

During the first half of the thirteenth century, further developments in notation allowed for even more rhythmic accuracy. While the rhythmic modes provided insight into a composition’s rhythm through a specific combination of ligatures, by the late thirteenth and fourteenth centuries, individual notes were assigned independent rhythmic values (called “mensural notation”). Composers used mensural notation throughout the Renaissance until the beginning of the seventeenth century. Additionally, some of the most visually stunning pieces composed with mensural notation were written in the late fourteenth-century musical style known as the Ars Subtilior. For example, the Chantilly Codex (a manuscript copied in Italy in the early fifteenth century) contains a composition by composer Baude Cordier (c.1380-1440) titled Belle, Bonne, Sage that is notated in the shape of a heart.

Alongside the evolution of notation, stylistic developments emerged during the Middle Ages that paved the way for rhythmically complex compositions that continued into the Renaissance (and beyond), notably, the motet.

The motet was developed during the thirteenth century and was associated with both sacred and secular music. Motets were compositions that consisted of multiple vocal parts: the lowest vocal line was called the tenor, and its melody was derived from existing plainchant. Above the tenor line were vocal lines called the motetus and triplum. These lines were sung simultaneously and expressed different texts that could be sung in various languages (for instance, the tenor line would be sung in Latin, while the motetus could be sung in French). Although each vocal line was composed to different texts, they were related thematically. The fourteenth-century composer Philippe de Vitry (1291-1361) is recognized as one of the most prominent medieval composers of motets, and Garrit Gallus is among his most notable works.

During the Renaissance, the motet evolved to consist of melodic lines that echoed one another. Additionally, while the medieval motet could consist of texts written in vernacular language combined with Latin, the Renaissance motet was often composed to sacred Latin texts. One of the most noteworthy and influential Renaissance motets was written by the sixteenth-century composer Josquin des Prez (c.1450-1521) and is titled Ave Maria.

While medieval and Renaissance notation varies significantly from the notation of today’s scores, its significance in the history of Western music—specifically in the development of notation as we currently understand it— is irrefutable.

Sonja Maurer-Dass is a Canadian musicologist and harpsichordist. She is currently pursuing a PhD in Musicology at Western University where she is researching eighteenth-century French musical exoticism and its relationship to Enlightenment philosophy. Additionally, she holds a master’s degree in Musicology specializing in late medieval English choral music and the Old Hall Manuscript from York University. In 2019, Sonja presented her paper titled Royal Authorship in the Old Hall Manuscript: A New Approach for Examining Roy Henry’s Identity and Compositions at the 9th International Medieval Meeting held at the University of Lleida in Lleida, Spain. This paper has undergone peer review and is being prepared for publication in Spain. Follow Sonja on Twitter @SonjaMaurerDass

Music in the Medieval West: Western Music in Context, by Margot Fassler (W.W. Norton and Company, 2014)

Music from the Earliest Notations to the Sixteenth Century, by Richard Taruskin (Oxford University Press, 2010)