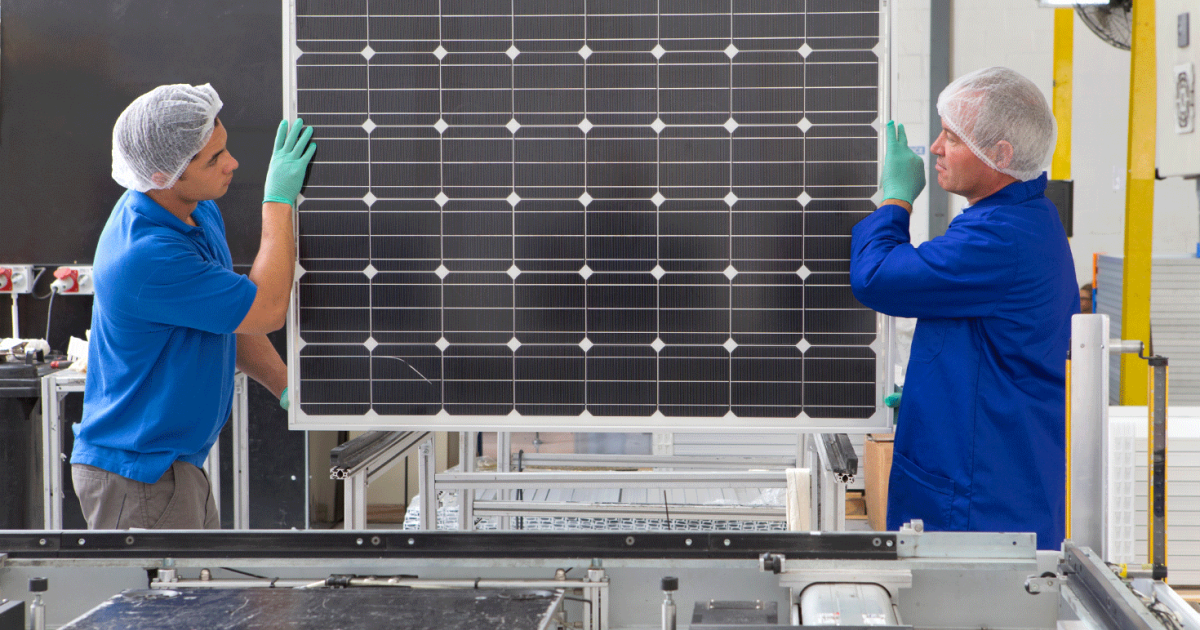 President Joe Biden extended tariffs on imported solar panels in February in a bid to protect domestic manufacturing. These tariffs add a 14-15 percent tax on cheaper imports, raising their cost in the U.S. At the same time, the Biden administration is urging an expansion of renewable energy and energy security, two priorities for many countries.

As an energy analyst focused on renewable electricity generation, I follow the impact of solar policies. To understand why the tariffs were extended, it’s helpful to understand their historical impact.

The U.S. was a solar leader once

U.S. engineers invented the solar cell, the part of the panel that generates electricity, in the 1950s at Bell Labs. The country was a world leader in manufacturing until about 20 years ago.

Several solar cells connected together make up a typical photovoltaic solar module. Producing the most common type of PV module, a crystalline silicon module, is a multistep process. As global demand for solar-generated energy increased, many of these steps began occurring in China or involved Chinese companies in Southeast Asia.

Until 2011, the U.S. was a net exporter of PV modules. As PV module prices dropped precipitously in 2010, many U.S. and German companies could no longer compete and closed operations. U.S. companies asserted that China was providing unfair subsidies and its companies were dumping solar cells — selling them at less than the cost to manufacture them — to drive out competition. 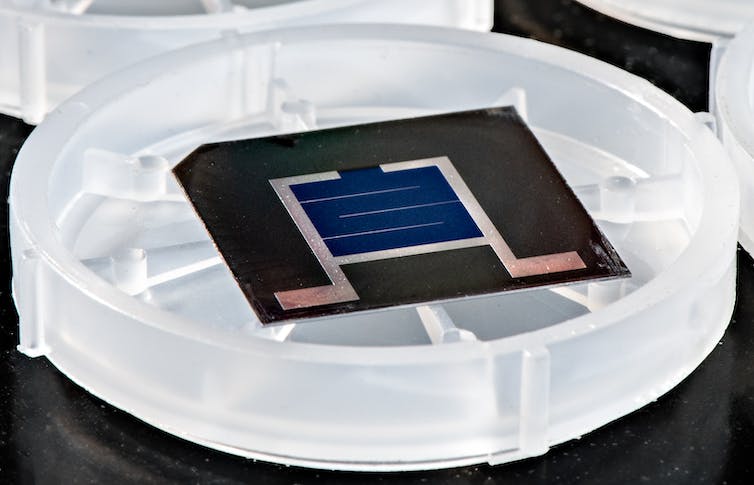 Scientists at the National Renewable Energy Lab have been developing next-generation solar cells. A PV module, or solar panel, is made up of several cells. Dennis Schroeder / NREL

How the solar tariffs work

The U.S. placed its first and second set of tariffs on Chinese cells and modules in 2012 and 2015, citing unfair trade practices.

However, low-cost modules and cells still came into the United States from outside China, particularly as Chinese companies added manufacturing in neighboring countries not subject to those duties. Most of the material to make cells and modules was still increasingly coming from China.

In 2018, the U.S. government put in place the Section 201 tariff, a four-year safeguard to give domestic PV manufacturers temporary relief from the “serious” injury imports were causing them.

The duties began at 30 percent on most imported modules, decreasing 5 percent each year until 2022, when the rate dropped to 15 percent. PV cells were also subject to these duties, but the first 2.5 gigawatts of imported cells were exempt to allow companies that assemble modules some relief while encouraging PV cell manufacturing in the U.S.

Modules produced from cadmium telluride, rather than crystalline silicon, were also exempt, and in 2019 bifacial modules — designed with a clear backing so that energy is produced when light hits the front or the back of the panel — also became exempt. Both are used primarily for large solar farms.

The tariffs are considered a major factor in the more than tripling of crystalline silicon module assembly capacity in the U.S. between 2018 and 2020, and also in the recent scale-up of cadmium telluride module manufacturing by First Solar. That U.S. company benefited from the increased market price of competing crystalline silicon PV modules.

In addition to the tariffs, many module assembly manufacturers cited supply contracts with utilities or roofing companies and the 2018 U.S. corporate tax reduction as critical deciding factors for ramping up manufacturing.

Companies assembling modules in the U.S. benefited from the ability to import virtually all of their cells without tariffs — the 2.5-gigawatt quota was not hit until a month before the initial four-year term ended — while competing against imported modules that were subject to the tariff. 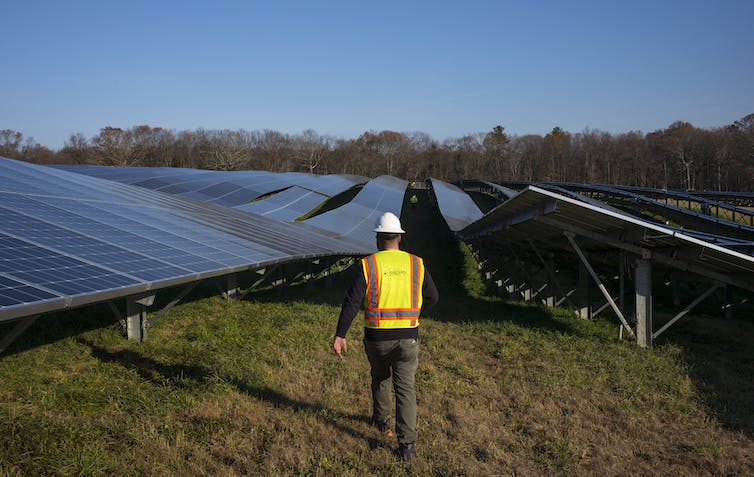 Utility-scale solar use has grown quickly in the U.S. in recent years. Robert Nickelsberg/Getty Images

Still, even with the tariffs in place, around 80 percent of solar modules installed in the U.S. during the initial four-year term were imported. According to trade data, just over half of PV modules imported in 2020 were not subject to the Section 201 tariffs.

Additionally, modules produced in the U.S. still rely heavily on China for parts, such as the aluminum frame and glass. Soon after the Section 201 tariffs were put in place, the U.S. government placed Section 301 tariffs on these Chinese products, increasing the cost of assembling PV modules in the U.S.

How did tariffs affect the U.S. solar industry?

The tariffs did not result in an increase in the domestic production of PV cells.

Therefore, the tariff provided no competitive advantage for PV cells domestically produced. As of the end of 2021, there was no PV cell production in the United States.

The impact of the tariff on solar deployment in the U.S. is less clear.

The tariffs were put in place during a period when global PV module prices were falling. So, while there was a general runup in price when the tariffs were first proposed, U.S. panel prices have since trended downward and are lower than before the tariffs took effect, although they remain above global average prices. In fact, more solar capacity was installed in the U.S. during the Section 201 tariffs than at any other time in history, in large part because of the low cost. 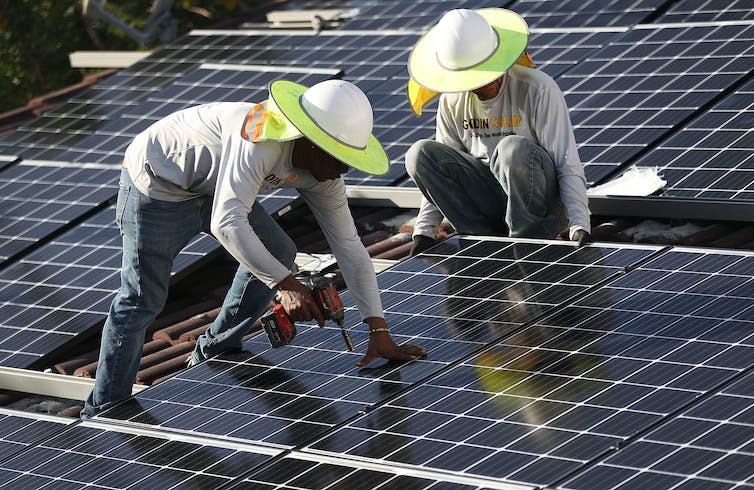 The tariffs on solar panel imports raised concerns about U.S. installation jobs, which were among the fastest-growing job sectors in the country. Joe Raedle/Getty Images

Still, the U.S. solar trade group, the Solar Energy Industries Association, claims that the U.S. would have installed 11 percent more solar, employed 62,000 more people and had $19 billion more in investment without the tariffs. Most U.S. solar jobs are associated with building projects, not manufacturing equipment, and developers have said the higher prices forced them to delay or cancel solar projects. At the end of 2020, of 231,000 U.S. solar jobs, only 31,000, 13 percent, were in manufacturing.

How will the next four years affect solar expansion?

The Biden administration set a U.S. goal in 2021 to reach zero carbon emissions from the electricity sector by 2035 to stop its role in climate change. That will require quadrupling 2020’s record level of annual solar deployment by the end of the decade.

Tariffs have the potential to slow deployment by making PV systems more expensive. That could be offset, however, by mandates and significant public and private investment in the solar sector.

The U.S. goals are part of a larger global effort to both increase local energy security and reduce greenhouse gas emissions, which will likely require significant expansion of solar manufacturing. The U.S. has the potential to be part of this larger global supply chain, but it must scale up to compete.