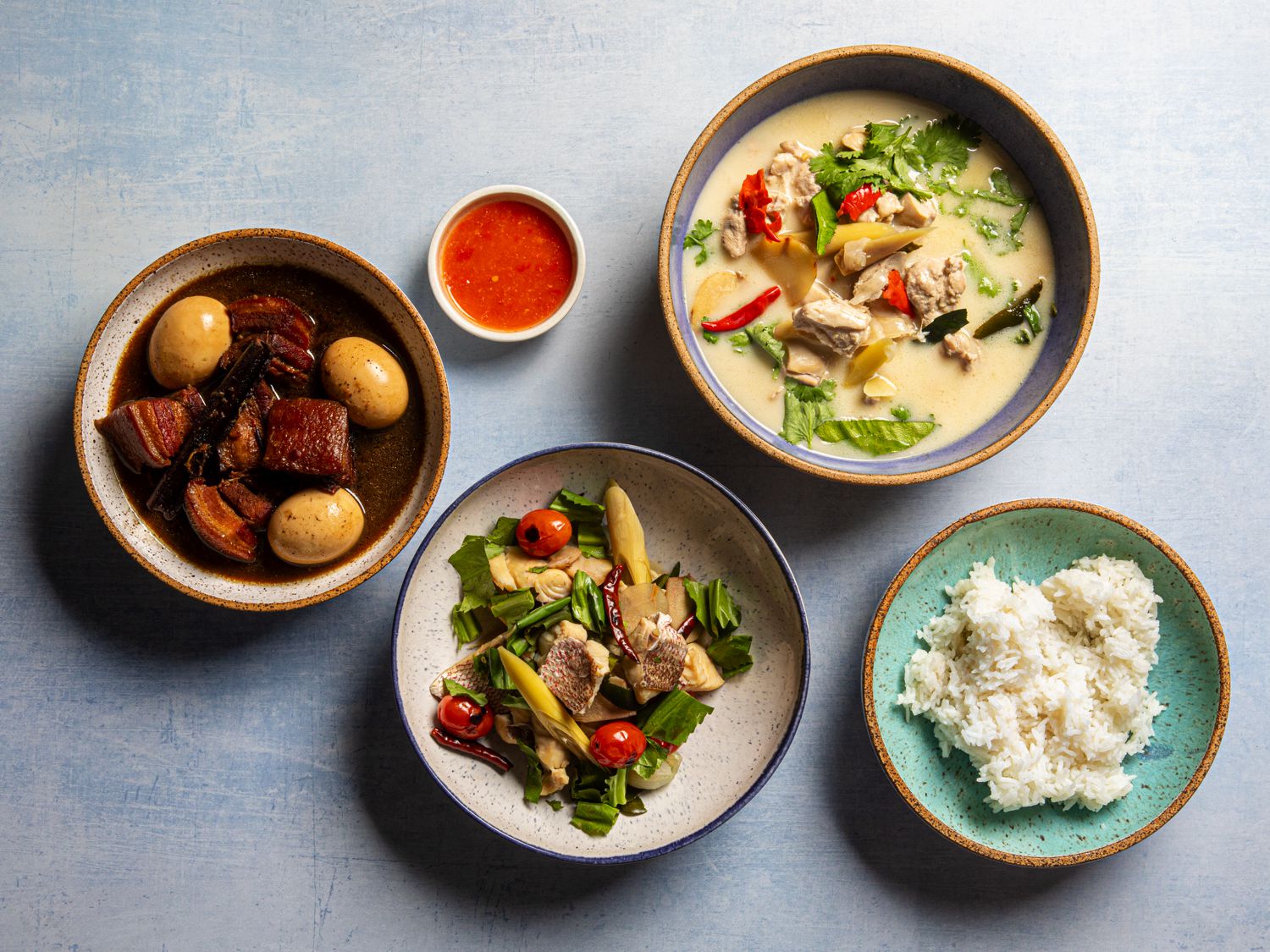 As I wrote in my guide to putting together a balanced Thai meal, soup is usually served alongside other dishes centered around a rice-based meal. This lies in stark contrast with Western meals, where it’s common to eat soup by itself or as a first-course. In a multi-dish Thai meal, soups serve an important role of making sure the overall meal isn’t too dry, especially if other dishes you’re serving don’t have much sauce, such as fried fish or some stir-fries.

Typically, each diner will have a small side bowl, while the big communal bowl of soup sits at the center of the table. At home, most people help themselves by filling their own side bowls, but at restaurants, the server might do this for you.

Once you have some soup, there are a few ways to go about eating it, depending on the nature of the soup and your preference. For a lighter soup that can be eaten with or without rice, like a tom yum or a tom kha, you can eat the soup on its own as you enjoy the meal to wash down other drier dishes, or add some rice directly to your bowl and eat it like a rice soup. You can also spoon some of it over a bed of rice, allowing the broth to serve as a sauce for the rice to soak up. For richer, stew-like soups that are exclusively meant to be eaten with rice, such as moo palo, you spoon the soup over the rice on the plate to ensure there’s rice with every bite.

To make it easier for the unfamiliar to grasp the massive variety of Thai soups, I’ve broken them into three basic categories. Even though the entirety of Thai soups doesn’t fit into three neat categories, these ones cover a good chunk of them. Take note that there are a few outlier soups worth mentioning such as tom gati, a rich coconut milk soup that gets its flavor from shrimp paste, shallots, and tamarind, and tom som, a sweet-tart soup usually made with fish and always garnished with ginger (not a common herb in Thai soups).

A quick additional note about noodle soups, which I won’t cover in detail because they are a separate category altogether: Noodle soups are of Chinese origin, and they are not served in the same way other Thai soups are. They are what we consider ahaan jaan diew, or a “one-dish-meal,” which means it is a complete meal in itself; it’s not shared and not served as part of a family-style meal. I refer to these as the “sandwiches” of Thai cuisine.

This is probably the first category of Thai soup most people will encounter, because it’s what is most widely available in Thai restaurants overseas. They are also the most uniquely Thai in terms of flavor profile: light, brothy soups that are infused with Thai herbs, most commonly lemongrass, galangal, makrut lime leaves, Thai chiles, and turmeric.

The broth can be clear, using water or stock as a base, such as the famous tom yum goong soup made with shrimp, or this fish version, tom yum pla, made with red snapper, fish stock, lemongrass, and tomatoes and flavored with fish sauce and lime juice. The soup can also be enriched with coconut milk, which is the case with tom kha gai, a chicken soup with galangal, though the overall texture is still quite light and brothy.

Anything is game in terms of protein, but each soup does have a “classic” pairing. For example, the most common protein for tom kha is chicken, and for tom yum, it’s shrimp. Vegetables usually play a secondary role in these soups with straw mushrooms and tomatoes making frequent appearances even though you can add whatever you wish (and sometimes no vegetables are added at all). The soups are usually finished with cilantro or sawtooth coriander, though again, there are no hard and fast rules. The seasonings are usually fish sauce, sugar, lime, and/or tamarind. These soups are almost always spicy, and sourness is always present whether as the leading or secondary flavor. In different regions of Thailand, fermented salty seasonings are sometimes added, in addition to fish sauce, to boost the umami and funk.

It’s important to note that the sturdy herbs in these soups are for infusion purposes only and they’re not meant to be eaten even though they are traditionally left in the soup for serving, much like a bay leaf or a rosemary sprig. It’s important to warn unfamiliar guests about this to save them from the unpleasant experience of biting into a stalk of lemongrass! To make it easier for them, you can remove the herbs before serving, though personally, I like to remove some and leave a few in the soup as garnish. This way, people can see where the bright, fresh flavors are coming from.

In Thai, these are known as gaeng jeud, which translates as “bland curry,” or tom jeud, which literally means “bland soup,” but they are anything but bland. While these names belie the depth of flavor of these soups, they are intended to differentiate them from more robustly seasoned soups, because gaeng jeud are very light, never spicy, and use minimal herbs and seasonings. I think of gaeng jeud as our equivalent to miso soup, because in many families, especially ones with kids, they are served regularly as the default soup of the meal. Growing up, my family probably had gaeng jeud two to three times a week. This tofu pork soup is a great example of a simple, light yet flavorful clear soup.

The base of gaeng jeud is most commonly pork stock, or chicken stock for those who don’t eat pork, though many busy home cooks today use bouillon cubes or powder added to water. Garlic, cilantro, and white pepper are usually added as aromatics. Some people pound them all together into a paste that we call saam gler, the equivalent of Thai mirepoix, and dissolve it into the broth. Others add fried garlic, garlic oil, white pepper, and chopped cilantro to the soup at the end.

In terms of proteins and vegetables, common options are pork spare ribs, lightly-seasoned pork meatballs, napa cabbage, soft tofu, egg tofu, glass noodles, green onions, and cilantro, though this can be changed to include whatever soup-friendly ingredients you have in your fridge. Seasonings are kept light and straightforward: soy sauce, fish sauce, and a touch of sugar as needed.

These soups are ones that have been influenced by Chinese immigrants, of which there are many in Thailand, my family included. It’s hard to pin down a description of what these soups are because they vary greatly, but they tend to involve braising meat and a prominent use of soy sauce, with none of the Thai herbs used in the herb-infused soups discussed above. To be clear, this category does not include the Chinese-style noodle soups I’d mentioned above.

A classic one is moo palo or kai palo, a dish of braised pork in a sweet-salty soy sauce broth with hard-boiled eggs. This is a strongly flavored soup that can be considered a stew, since it’s not ideal for sipping and should always be served over rice.

Another that comes to mind is jap chai, a dish near and dear to my heart because it’s something my grandmother makes regularly. This is a humble soup made of braised pork ribs, cabbage, daikon, gai lan, dried shiitake mushrooms among other things. The broth is seasoned primarily with soy sauce and oyster sauce, and it is always served with rice.

How to Start Cooking Thai Soups At Home

When you’re ready to make your first Thai soup, I recommend trying one of the herb-infused soups first, whether that’s the tom yum pla or tom kha gai. They’re quick and easy, and will allow you to experience the iconic aromas and flavors of Thai cuisine. If you have kids, tofu pork clear soup is always a hit with them. And, once you’re ready for more, try a Chinese-style soup, which is always a treat as they’re not commonly available in Thai restaurants overseas. Then, feel free to play around with recipes by changing up the protein, vegetables, and herbs to see if you can come up with your own signature Thai soup!