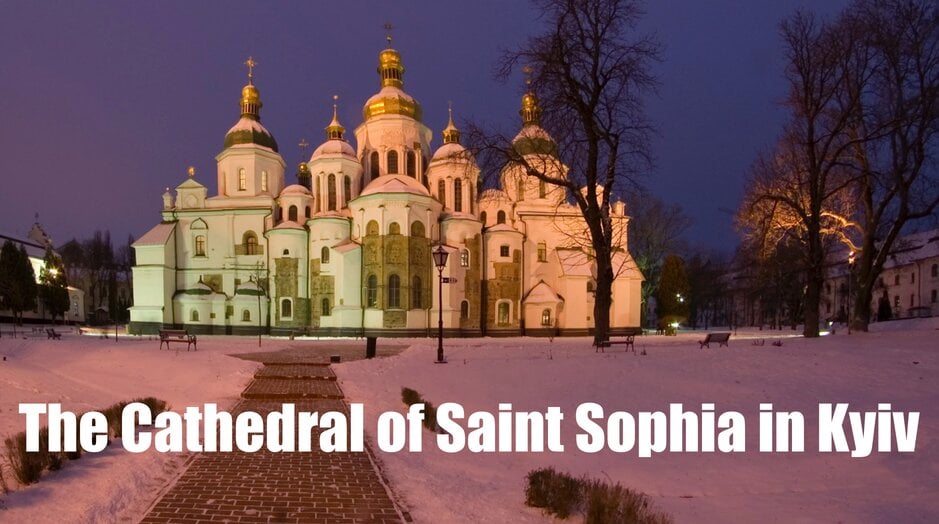 The people of Ukraine and the local cultural heritage of medieval Rus’ are in the crossfires of Russia’s ongoing attacks. What the world is witnessing is tragic, and the consequences to human life and to the medieval monuments that still stand in the historic cities of Ukraine, are irrecuperable.

Several key churches that are UNESCO World Heritage sites preserve the history of medieval Rus’ within the modern borders of Ukraine. Most notable among them is the Cathedral of Saint Sophia in the historic center of Kyiv, built by Yaroslav the Wise (r. 1019-1054) during the first decades of the eleventh century (before 1037). His father, Prince Vladimir the Great (r. 980-1015), adopted Orthodox Christianity in 988, initiating a process of Christianization in the region.

Situated in the heart of Ukraine’s capital, the cathedral of Saint Sophia was likely built with assistance from Byzantine masons using the recessed brick technique, characteristic of building projects in Constantinople. But it was not just in the materials and the methods of construction that this important monument recalled Byzantine church building traditions. The layout and the rich mosaic decorations of the interior expressed Byzantine ideas, as well.

The cathedral was built on a cross-in-square core surrounded by barrel-vaulted aisles with galleries and a wider outer aisle, with a tripartite apse and additional chapels facing east. The Byzantine-inspired layout is here transformed in order to create an impressive setting and accommodate a large number of the faithful. The pyramidal arrangement of the exterior culminates in the central dome, which rises 29 meters above the naos. Intricately designed and monumental in scale, the cathedral was meant to impress and inspire, while prominently marking the skyline of medieval Kyiv.

The interior decorations also contributed to the awe-inspiring experience. The lower sections of the walls preserve marble revetments and mural paintings, while the upper sections display vibrant mosaics with Christological, Mariological, and hagiographical content. The main dome carries a larger representation of Christ Pantokrator surrounded by angels, with images of the apostles and the four evangelists (Matthew, Mark, Luke, and John) on the drum of the dome and the pendentives below, respectively.

A frontal Virgin Mary (Oranta) stands in the apse against a gold background, while below unfolds a detailed representation of the Communion of the Apostles. The detailed mosaic shows a double figure of Christ at the central altar, assisted by angels holding liturgical fans, and administering the Eucharistic bread and wine to the apostles arranged in two groups of six to either side. As a liturgical interpretation of the Last Supper, such image types place emphasis on Christ’s initiation of the Eucharistic sacrament and his pontifical role. Situated in the middle level of the apse decorations, and thus above the height of the original templon, the mosaic of the Communion of the Apostles was meant to visualize for the faithful assembled in the naos the activities unfolding at the altar. Although other mid-11th-century examples of this image type offer iconographical variations (as, for example, the mural in the church of Saint Sophia in Ohrid), the image as it appears in the Cathedral of Saint Sophia in Kyiv appears to have been favored in later Byzantine representations of the Communion of the Apostles theme.

The Cathedral of Saint Sophia in Kyiv demonstrates the reworking in a local context of Byzantine church building and decorating traditions that inspired its forms, decorations, and also its dedication—that is, the church of Hagia Sophia in Thessaloniki, and the famous Hagia Sophia in Constantinople/Istanbul (now a mosque). The innovative design and decorations of the latter, in fact, have informed Christian architecture in Byzantium and across the Eastern Christian cultural spheres—from the Balkan Peninsula to the Carpathian Mountain regions, and further north into Rus’ and later Muscovy—yet no building replicated its monumentality, remarkable engineering, and variety of distinctive features and visual effects.

The layout of the Rus’ churches, with a subdivision of the interior spaces into smaller sections, and a vertical emphasis at the dome over the crossing, became characteristic features of later Rusian and Russian church architecture. For example, the mid-11th-century church of Saint Sophia in Novgorod emulated the celebrated cathedral in Kyiv, but on a smaller scale and less elaborate in terms of design and decoration. The specifics of how architectural models were mediated in this northern cultural context relative to Byzantium, the medieval West, and local traditions, remain to be fully explored. What is certain, is that Kyiv served as a cultural center for the dissemination of artistic and architectural models in other regions of medieval Rus’, and beyond.

Nevertheless, in the local population’s conversion to Eastern Christianity, Byzantium and Justinian’s Hagia Sophia played significant roles. Indeed, when the ambassadors of Prince Vladimir (r. 980-1015) attended the liturgy in Hagia Sophia in Constantinople, they recounted: “…we knew not whether we were in heaven or on earth. For on earth there is no such splendor or such beauty, and we are at a loss how to describe it. We know only that God dwells there among men, and their service is fairer than the ceremonies of other nations. For we cannot forget that beauty.” Hagia Sophia’s architecture, decorations, and rituals thus enhanced the sanctity of the space, leaving remarkable impressions on all those who experienced the building and sought to recreate its splendor.

Like the famed Constantinopolitan Great Church, the Cathedral of Saint Sophia in Kyiv was designed to overwhelm the senses both visually and sensorially, transposing physically and spiritually all those who stepped within its walls. Unfortunately, much of that original splendor has been lost with the passage of time. This moment in time also has its challenges. The hope now is that this important monument of medieval Rus’ can survive the current attacks on Ukraine, its people, and its cultural heritage so that the physical fabric and many memories of this valuable monument can enrich future generations.

Alice Isabella Sullivan is an art historian specializing in the medieval history, art, and culture of Eastern Europe and the Byzantine-Slavic cultural spheres. She has authored award-winning publications, is co-editor of Byzantium in Eastern European Visual Culture in the Late Middle Ages, Eclecticism in Late Medieval Visual Culture at the Crossroads of the Latin, Greek, and Slavic Traditions, and co-founder of North of Byzantium and Mapping Eastern Europe. Follow her on Twitter @AliceISullivan