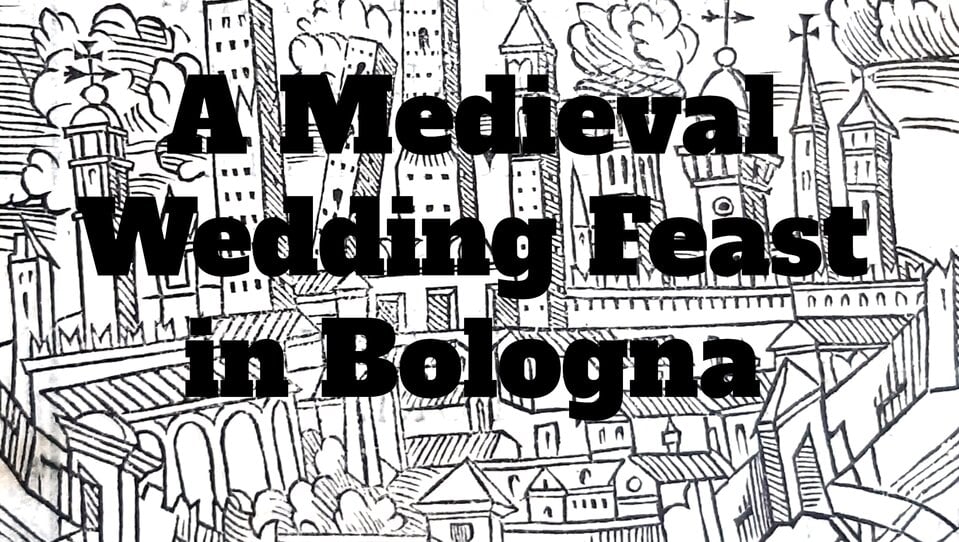 If you wanted to hold a medieval wedding feast, you could do well to follow the example given by Annibale II Bentivoglio and Lucrezia d’Este in 1487.

In his late sixteenth century work, Della historia di Bologna, the Augustinian friar Cherubino Ghirardacci recorded a fundamental event for the city of Bologna, which had occurred about a century earlier: the wedding of Annibale II Bentivoglio (1467– 1540), son of the Lord of Bologna, Giovanni II Bentivoglio, and Lucrezia d’Este (b.1477), the daughter of the Duke of Ferrara, Ercole I d’Este. We can trust Cherubino’s account, though, as he consulted a number of sources that had been written at the time of the event, such as the Nuptiae Bentivolorum by Filippo Beroaldo, Giovanni Sabadino degli Arienti’s De Hymeneo, or the Epithalamium by Angelo Michele Salimbeni. Cherubino diligently read these works in the archive, not unlike a modern historian would do; and – not unlike a modern historian – he believed that the facts he was going to pass down to future readers were worth mentioning.

Actually, they are, since they show that in late medieval times, weddings were based on spectacular dishes and exquisite culinary creations, rather than on a solemn religious function, and the blessing of the couple by a priest. They also disclose the relationship between the Lord and his citizens, what they wanted to show to each other on such occasions, and why.

Cherubino was particularly interested in the core moment of the wedding, the banquet; but the process leading to it represents a beautiful portrayal of a late medieval Italian city. He tells that in 1487, the people of Bologna were ready to hail Lucrezia d’Este and to celebrate her wedding with Annibale. Nine years had passed since the celebration of their betrothal, when they were eight and nine years old, respectively: now, their marriage would finally seal the alliance between two of the more powerful families of the time.

The entire city was splendidly decorated in honour of the nuptials: Giovanni II Bentivoglio ordered that all the streets be adorned with beautiful drapes, and had some houses in front of his palace be destroyed in order to broaden the opposite square, and make space for the celebration. He himself housed a few of his three thousand guests in his own court; the others were accommodated in nearby nobles’ residences.

The Lord was going to spend a fortune to honour the event properly. It was not simply a matter of arranging a wonderful party; most importantly, it was the perfect chance to legitimize his power in front of the citizens and of his honourable guests. A popular Anglo-Saxon kenning (i.e., expression with metaphorical meaning) for “king” was “ring-giver”: a king was right and just when he shared his treasures with his men.

As was customary, Giovanni received a number of goods as homage: citizens and noblemen from all over the countryside around Bologna honoured their lord with money, elegant furnishings, game, pigs, boars, wine, olive oil, barley, bread, capons, partridges, pheasants, turtle doves, quails, roe, deer, rabbits, hares, fish, cheese, fruit, salt, sugar and more (sugar and salt being particularly rare and expensive back then). This was the best Bologna could offer: this was the mirror of fifteenth-century Padan Italy.

In the biography of the countess Matilde of Canossa (1046–1115), the Benedictine monk Donizo writes that, when her parents got married, her father Bonifacio of Canossa had his horse hooves loosely shod with silver: he wanted the silver to detach itself as the horses were running through the lands of his people, so that these could find the precious metal and enjoy a little portion of their lord’s wealth. Unsurprisingly, Filippo Beroaldo noted that Giovanni Bentivoglio’s aim was to be remembered as the most generous lord of his time, and the wedding banquet of his son had to be one of the greatest ever, necessarily. He wanted to offer the best entertainments, the best adornments, the best chefs: he wanted his people and his peers to know he could afford all of this.

There was a crucial part that food had yet to play, though: it was time for the wedding feast to begin. It was time to set up one of the more lavish banquets of the Middle Ages – this is, at least, what Cherubino Ghirardacci wanted us to believe.

On January 28th, under heavy rain, Annibale came back from Ferrara with Lucrezia and entered Bologna, where they were welcomed by eminent political figures: among them, Lorenzo de’ Medici, the Duke of Milan (1449–1492), Gian Galeazzo Sforza (1469–1494), and the Bishop of Urbino (as papal vicar). Lucrezia, and her family, were then led to the lord’s palaggio (palace) where the wedding banquet was waiting for them. But first, before the guests were seated, another encoded message was to be exchanged between Giovanni Bentivoglio and his city. Indeed, the delicious courses of the banquet were first shown to the people of Bologna around the palace square, in order to let everyone behold the opulence, the wealth, the power of their lord: a ruler was to be generous, not a peer to his people.

The banquet started at 8pm and went on for seven hours. After some sweets as starters, meat took the stage, unsurprisingly: veal, peacocks, game and fowl of all sorts, followed by further sweets and cakes. Not only was the palate pleased, the eyes were meant to be satisfied as well. Every course was indeed accompanied by miniature structures symbolizing urban noble culture: a sugar castle was introduced in the hall, finely carved and complete with merlons and towers, filled with living birds that were then freed before the guests. They burst out laughing and applauding at this sight. Late medieval elites identified themselves with their wonderful palaces, and with meats which reflected their refined (and not-so-warlike) lifestyle: mainly birds, which flew high up in the sky and were “lighter” and “cleaner” than other animals, as the new urban elite was “lighter” and more polished than common people and early-medieval elites.

Later, they could see rabbits escaping from the gates of another similar construction; finally, as they were about to enjoy rich trays of porchette (pork roast), they were entertained by a little wonderful fortress with a grunting pig inside. Clearly, the living animals matched the courses that were being served on the tables. Even the cooked animals were prepared with the greatest care: they were served covered with their own feathers and skins, standing up as if they were alive.

The banquet was closed with pears, sugarplums, and marzipan at 3am. The following day, Annibale and Lucrezia, followed by their cortege, went to St. Petronius cathedral to attend Mass. Cherubino Ghirardacci does not specify whether this was the Nuptial Mass, and there is no evidence in the text that may let us believe it was: actually, Giovanni wanted to attend Mass in order to thank God for the happy event itself, and not to ratify it through the blessing of a priest.

Just the time to leave the cathedral, it was lunchtime already. We do not get to know much about this meal, for the previous night’s banquet had been the core of the wedding. However, Cherubino tells that the rich lunch was followed by games and dances in the palace square insino all’hora della cena (‘till dinner).

The next morning, after a fine breakfast, the chefs pleased the aesthetic taste of the guests once again. Each table mate was given a personalized present made of sugar, related to his/her person: Lucrezia received a triumphal chariot, Annibale a beautiful falcon, Lorenzo de’ Medici a castle and a peacock. They were greatly impressed by such wonderful gifts.The third day of celebration ended up again with jousts and dances, and the final dinner gathered all the guests together for the last time around the table. On the fourth day, they all left Bologna.

The picture that Cherubino Ghirardacci and his sources painted of the city of Bologna is clear and very intriguing. It reflects the slow but progressive evolution of a new kind of urban elite, so different from the one ruling at the time of Charlemagne. The latter was war-like, violent, gluttons for large game such as bears and boars, and pragmatic. The new elite enjoyed aesthetics, elegance, showmanship, and this was mirrored in the chefs’ skills: dressed peacocks, castles of sugar, tastes and scents of their noble and courtly living. This was also the story of the relationship of the lord with his subjects: on the one hand, they needed to honour Giovanni Bentivoglio and remark their loyalty; on the other hand, Giovanni wanted to reinforce his legitimacy to rule over them. Last but not least, he wished to be remembered as a powerful lord who once gave a memorable wedding feast. “The kingdom of heaven”, the Gospel of Matthew reads, “is like a king who prepared a wedding banquet for his son.” And Bologna, for a few days, did turn into a little kingdom of heaven.

Andrea Maraschi holds a BA degree in Modern Humanities (2008), an MA degree in Medieval History (2010), and a Ph.D. in History from the University of Bologna (2013). From 2014 to 2017 he has been a postdoctoral fellow at the University of Iceland. He has taught courses on Food history in the Middle Ages and Anthropology of Food, and he has published on many aspects connected with food in medieval times such as banqueting, religious symbolism, and magic practice. He is he is currently teaching at the University of Bari. Click here to view his Academia.edu page or follow Andrea on Twitter @Andrea_Maraschi