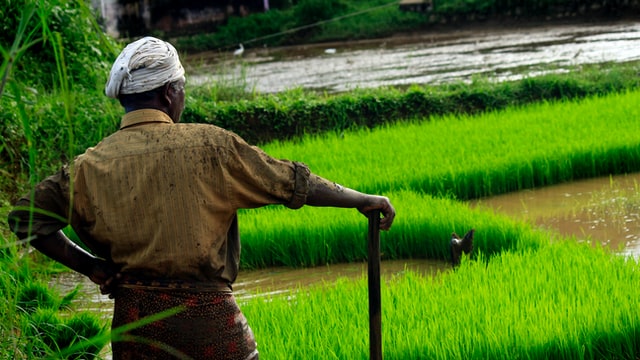 The Green revolution brought about in India in 1960s was a game changer, it revolutionized agricultural production and perpetuated a paradigm shift in the Agrarian scenario. Objective was to transform India from a country facing extreme food scarcity and food insecurity to a country with self sufficiency in grains. With a planned and targeted strategy we achieved that and beyond, and state of Punjab was poster boy of this widely hailed success story but it came at the harrowing cost of human lives and health. It gave rise to an era of unprecedented groundwater pumping fueled by free and subsidized electricity. A semi arid state, the depletion of groundwater had disastrous consequences leading to concentration of carcinogenic chemicals in groundwater, giving an open invitation to fatal diseases like cancer, renal failures, fetal abnormalities etc, and the groundwater was found to be in violation of all BIS, WHO uranium norms. Experts suspect both manmade and geogenic factors responsible for this, but even geogenic factors take root from manmade acts. Whilst the central governments have taken active steps for preservation and restoration of groundwater, we’re still miles away from achieving the state of normalcy.

The Green revolution brought about in the 1960s was a game changer, it revolutionized agricultural production and perpetuated a paradigm shift in the Agrarian scenario. It was a time when the US very conspicuously made India feel that it was functioning on the mercy of US food exports. “When we want to buy grain from the outside, we are pictured as reaching out with a begging bowl” Quoted Indira Gandhi, which gave birth to Green revolution and empowered developing countries like India to overcome acute shortage of grains and more importantly overcome poor agricultural productivity. While it managed to achieve the major objectives of drastically reducing India’s hunger crisis and famine by bolstering our food production, this whole feat was not less than magical in the fact that we through very meticulous planning, targeted inputs, optimum support and strict timelines, in a very short span of time were rewarded with self-sufficiency in food grains production, leaving us with a gutsy feeling of “happily ever after”

But, this revolution came at a huge ecological cost, the case in question: Punjab, yes the golden land and the wheat bowl of India. It came, and came at the harrowing cost of human lives and health, scarring families for generations. The aftermath has revealed it fangs in ways never seen before.

Punjab is a semi arid region, meaning that it was not naturally the most suitable state for growing rice, an extremely water intensive crop. To grow 1 kg of rice, as many as 5,337 liters of water is required. Yet, Punjab was one of the 4 states handpicked for carrying out this revolutionary project, because the resources to invest were limited and there was an impending urgency to deliver. The Simple Aim was to make India self-sufficient in staple grains as soon as possible, to change the picture of perceived helplessness of reaching out with a beggar’s hand. For this Punjab was advanced the best facilities such as superior quality seeds, mechanization, guaranteed prices for the crops etc. Irrigation water was initially made available from major dam and canal systems, and as these were fully appropriated, it slowly gave rise to an era of unprecedented groundwater pumping fueled by free and subsidized electricity for agriculture.

Now, the Government is encouraging farmers to cultivate rice by offering free power turned out to be a ticking bomb disguised as a boon, leading to drastic overexploitation of the aquifers despite the presence of five rivers. And this occurrence has been substantiated and evidenced by NASA’s Goddard Space Flight Centre Scientific Visualization Studio using the GRACE satellite from 2002 to 2008, wherein it came to light that the groundwater in Punjab, Haryana, Rajasthan had plummeted by more than 88-million-acre feet. According to some estimates this volume is equivalent to three times the volume of water present in Lake Mead, the largest reservoir of USA which is 640 sq. kms of area holding approx 26.12-million-acre feet of wate.

The changing crop pattern of Punjab

It is very pertinent to bring forth an important facet here, how the cropping pattern of Punjab changed over a period of time which is the root cause of all these problems. Mentioned here is the changing crop pattern in Punjab of some major crops.

It is apparent how the share of major crops in Punjab decreased tilting entirely towards rice and wheat which now accounts for 90% of the area. Putting things in perspective, previously only 6% of land was stressed, now almost half of the land is under stress or potential stress. This is a cause of worry also because gram, maize are extremely rich in nutrition thereby taking care of nutritional needs, ultimately health of the population and because of this drastic tilt, crops vital for well being also stood impacted.

The Punjab’s southwest fertile Malwa belt (area south of Sutlej river, comprising the districts of Bathinda, Barnala, Moga, Sangrur, Faridkot, Mansa and some parts of Ludhiana are worst affected. To study the potential health risks associated with the quality of groundwater, 3 districts (Ludhiana, Barnala and Bathinda) were chosen on the basis of their dependency on the groundwater for drinking, domestic purposes and agricultural purposes. In majority of the samples, the concentration of chemicals was found to be beyond permissible levels prescribed by the WHO. Samples were analysed for 9 trace elements, including arsenic, chromium, lead and uranium. The groundwater in all 3 places was not found to be fit for drinking.

In case of uranium, 85% of samples from Bathinda exceeded the WHO drinking water norms limit, while 75% and 10% of samples from Barnala and Ludhiana, respectively, were found to be violating the norms. The cancer causing chemicals such as arsenic and chromium exceeded the US EPA’s acceptable limits in all the 3 districts, but their concentration in groundwater was low as compared to BIS/WHO drinking water standards. In Bathinda, carcinogenic risk of arsenic and chromium was highest. The carcinogenic risk of chromium was also observed in Barnala and Ludhiana districts. The findings of this study have been published in the International Journal of Environmental Geochemistry and Health.

The study recommends that the government take preventive steps to provide potable water facilities along with large scale awareness camps/programs so that the people know the health risks of drinking non-potable water. Routine check-ups of people in the affected areas has also been vigorously advocated.

Findings of the Central Government

New data that the Ministry of Jal Shakti has shared in parliament suggests that the problem may be out of hand. According to the Central government’s Uranium report 2019-2020, the figures with respect to Punjab are as follows:

The exact sources of these heavy metals are unclear, but experts suspect geogenic factors and the rampant overuse of pesticides, fertilizers and other chemicals. When the so called HYV seeds varieties were introduced, touted as miracle seeds the only catch was that it came with a package of chemical fertilizers, without which they could not perform their ‘miracle’. The chemical fertilizers disturbed the natural character and structure of the soil, upset the balance of farming and gave rise to a host of new forms of diseases and pests attacking the crops.[1]

Let me try attempting a very layman explanation to this. The chemicals like uranium and radium were always present in the waters of Punjab, but the volume of ground water at one time was so huge that the effect/concentration of these chemicals was diluted to a large extent, but because of the shrinkage of the aquifers, it has led to an apparent increase in the concentration of these chemicals thereby becoming the cause of menace.

Multiple studies have linked the consumption of arsenic-contaminated water to damaged heart, lungs, liver and kidneys. The effect of all this can be witnessed in the rising number of cancer patients and children being born with abnormalities, etc in the Malwa belt.

A tragic fact that needs to be highlighted here is the presence of a train namely “Cancer Express” running from Bathinda in Punjab to Bikaner in Rajasthan, named so because it carries a large number of cancer patients for treatment at a cancer hospital, what can be more heartbreaking than this. The disturbing irony here is that the very purpose of consuming food is to keep one healthy and free from all the diseases, but here the very sources of life are threatening the human lives.

Punjab must focus on cultivating less water intensive crops like rice, sugarcane and more high value low water intensive crops such as Onion, Brinjal, carrot, marigold, cucumber, carrot, Mulberry, Ridge Gourd, Ash gourd, Chrysanthemum, Coriander, etc. Farmers from Karnataka are realizing higher profits using only 1/4th of the groundwater used by Punjab farmers. And the only way the state government can stop the farmers from cultivating rice is by putting an end to the supply of free power.  And government realizing this has come up with scheme and incentives.

Another way is by giving them good MSP for high value low water crops. Profitability can be a major motivating factor to switch. And the move is needed now more than ever, so that any irreversible/irreparable damage can be averted. No more delay is acceptable.

We also need more ground water monitoring stations than the existing 351 in Punjab, it’s an urgent need of the hour. (Orissa has the highest 1689) the Punjab government must routinely evaluate the situation and the funds allocated for the treatment of the patients affected must be increased and be routinely revised until the scenario starts changing for better.

Steps taken by the Government

There are several steps that have been adopted by the central government in this regard in collaboration with state governments, and the objectives with which the efforts have been undertaken is quite commendable and must be pursued vehemently and diligently. Some of the steps/programs initiated to control groundwater depletion are mentioned thereby:

There must be proactive efforts to quantify the contribution of groundwater to national gross domestic product. The pumping of groundwater should be regulated and the Laws that are in place for the pumping of groundwater should be stricter and follow specific regulations. Apart from all the preventive measures we can take now, there is an urgent need to undertake water harvesting techniques in the state. The state government must make it mandatory for construction of harvesting structures in every major institution, top of the buildings, in schools, colleges etc. Governments must purportedly strive to revive the traditional watershed management techniques, such as the system of Johars in collaboration with Atal Bhujal Yojana which proposes to involve community for preservation and management of groundwater is also very desirable. scheme plus incentivise treatment/repurification of waste water for other utilisations. Because the crisis of Punjab is a standing witness to the acute dangers- the depletion of groundwater can pose and how it is capable of making our lives very difficult and problem ridden.

The post A Poisoned Chalice: Curious case of glamour and deterioration of Punjab post Green Revolution appeared first on The Environmental Blog.