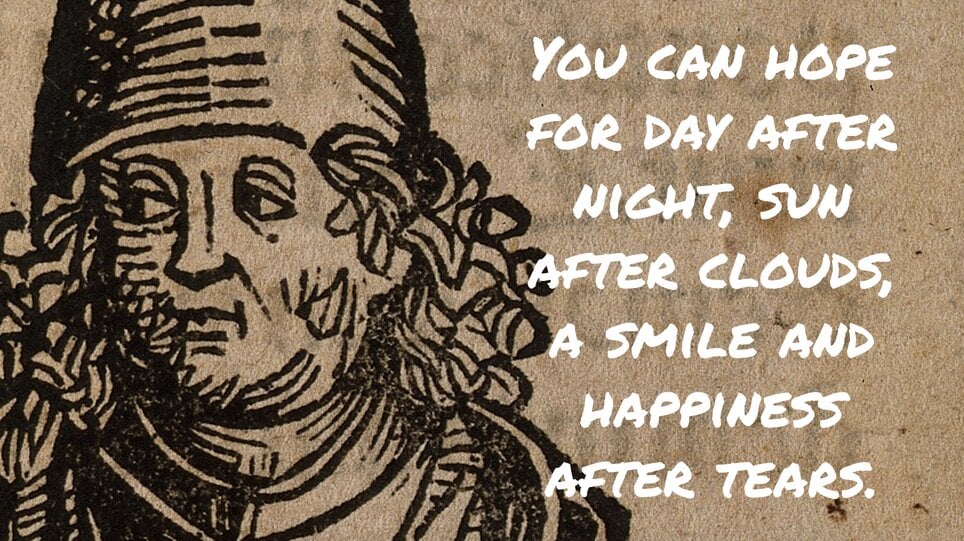 Are you looking for some medieval words of wisdom? Alain de Lille wrote a whole book of them, and here are some of our favourites.

Alain de Lille (c. 1128 – 1202/03) was a twelfth-century French teacher and writer. Legends grew about his vast intellect, including one tale where he persuaded a group of brigands who had come to rob his classroom to instead surrender themselves to the authorities. According to one admirer, his epitaph read: “Here is Alain, scruffy and short. Whatever it was humanely possible to know, he knew.”

One of his works was called the Parabolae – it was a school textbook written in verse, containing 132 pieces of advice. Many were just one couplet long, but some filled six couplets in length. They aimed to teach students both grammar and offer short moral lessons, covering topics such as not being angry or lazy, but rather being faithful and generous.

Here are twelve of our favourite pieces of advice, as translated by Ian Thomson and Louis Perraud:

A ram does not lug his fleece around for himself, but for others. So too is a miser always amassing wealth for others.

No water can quench a raging thirst, and no abundance satisfy a greedy heart.

You can hope for day after night, sun after clouds, a smile and happiness after tears.

A ship will sail not where the sailor, but where the wind wills, when there comes a wave from a swelling sea. Each man must go forth where fortune, not his intention, takes him. All must go forward with fortune as leader.

A fire widely scattered exerts less for than one strengthened by bundles of wood. He who gathers his forces falls more strongly on his foe than one who harrases him with scattered forces.

The fox is cruel and harsh in its own lair, although it would run away first if it were outside. A dog lying in a familiar doorway turns vicious and bites when it sees that a pack of dogs is reinforcing it. A wicked man is bolder among his fellows than he is on unfamiliar ground with an enemy threatening.

Different medicines work for different diseases. As the diseases vary, so do they. Teaching does not enter the mind by one method alone. For some, fear, for others, admonitions, for yet others, friendship is applied. You cannot calm four-footed beasts by striking them, and the rod cannot force raw schoolboys to study.

A procrastinator postpones everything in the most irritating way, and out of one tomorrow makes me a thousand tomorrows, why doesn’t a man who multiplies “tomorrows” multiply “todays” instead? Does not “today” mark off a period of sunshine as well as “tomorrow”? After today is over, it is usually tomorrow which has been brought back with the sun. But the procrastinator does not have the tomorrow which he promises me. That day will never dawn, nor the sun which shines in it, since his “tomorrow” will always be around the corner.

A man who has never learned what real hunger is does not appreciate what tastiness a savory morsel has. After a burning thirst, after hunger, two things are especially sweet to us, drink and food. Honey clings sweetly to a man’s palate if a sour taste stings it first. A man who endures cold respects warm clothes. A man who has suffered a disease rejoices in good fortune of health. Whoever considers the false blessings of the world and the blessings of heaven, let him eschew the false ones from the bottom of his heart, and let him seek the true blessings. Let one who wishes to win a place in heaven rid his heart before death of the sins and misfortunes of this world.

You can read the entire Parabolae, along with other translated works meant for medieval students, in Ten Latin Schooltexts of the Middle Ages, by Ian Thomson and Louis Perraud, published by The Edwin Mellen Press in 1990. You can buy it from the publisher’s website.