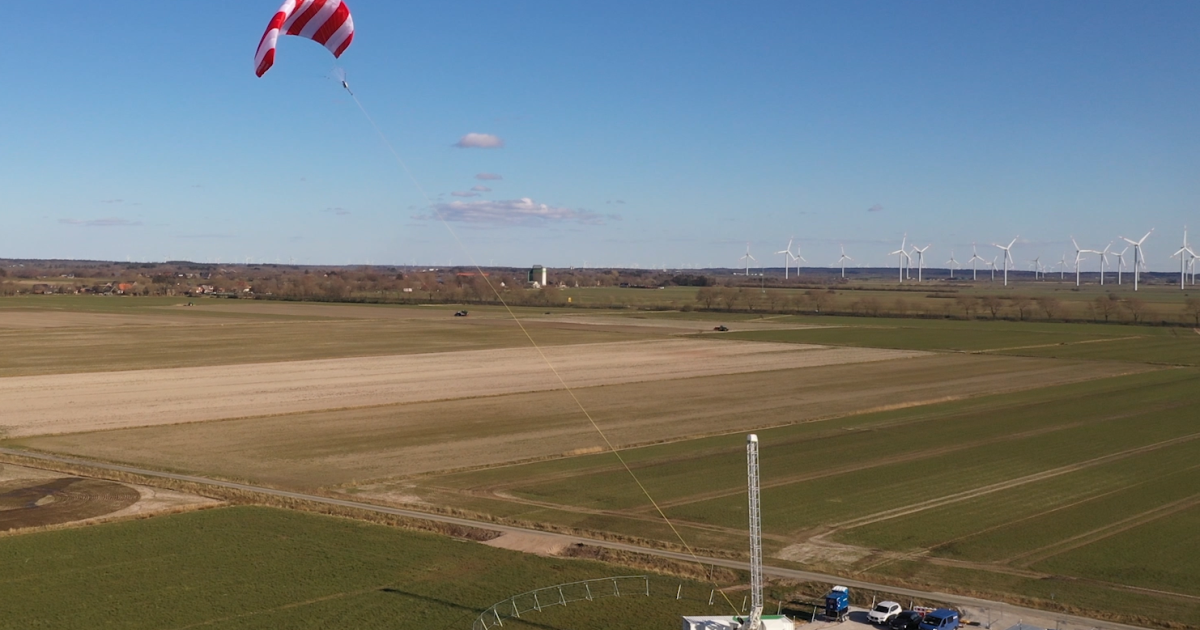 This article was originally published on Yale e360. Read it here.

Look up over the white sand beaches of Mauritius and you may see a gigantic sail, much like the kind used by paragliders or kite surfers but the size of a three-bedroom apartment, looping figure-eights overhead. The sail isn’t a tourist attraction — it’s creating electricity for the power grid of this island nation off the coast of East Africa.

Launched in December by German company SkySails Power, the massive wing is the world’s first fully autonomous commercial “airborne wind energy” (AWE) system. For the past two months, the company says, it has been delivering a little under its goal of 100 kilowatts — typically enough to power up to 50 homes. That’s just a tiny fraction of the island’s electricity demand, but, SkySails hopes, a sign of the future.

As the world heads towards net-zero emissions, pretty much every pathway for future electricity production foresees a big role for wind. The International Energy Association forecasts wind energy skyrocketing elevenfold by 2050, with wind and solar together accounting for 70 percent of the planet’s electricity demands. Thanks to the expanding number of wind turbines dotting fields and adorning ridgelines worldwide, the cost of wind power has plummeted about 40 percent over the past decade.

But some experts say those massive turbines aren’t always the best solution — they can be expensive or logistically impossible to install in remote locations or deep waters, and just can’t reach the lofty heights where the wind blows hardest. To harvest these spots, the key may be to fly a kite. Dozens of companies and a handful of academic institutions are investigating a plethora of airborne options. These range from soft wings that convert the tug and pull on a kite’s line to useful energy to complex rigid craft that carry turbines and generators on board and shuttle electricity down a tether.

Airborne systems have some key advantages, says Lorenzo Fagiano, an engineer at the Polytechnic University of Milan who is on the board of the industry association Airborne Wind Europe, founded in 2019. In some countries, suitable land for wind farms is getting slim: Wind farms typically need a whopping 71 acres to generate a megawatt, compared to 12 acres for a fossil fuel plant, and the ideal locations will eventually run out. “The first farms are in the best spots, and the best spots are limited,” says Cristina Archer, director of the Center for Research in Wind (CReW) at the University of Delaware.

Plus, in general, the higher you go, the faster the wind. “For a twofold increase in windspeed, that’s eight times the power,” says Fagiano. An airborne system can reach up to half a mile high, far above the 200- to 300-meter tip of the tallest wind turbines. The theoretical global limit of wind power at high altitude has been estimated to be about 4.5 times greater than what could be harvested at ground level.

It’s relatively cheap and easy to bring a wing to a remote location, adds Fagiano; these systems come in a container and can be dropped off wherever there’s a road or dock. They can also be tethered to an anchored barge in deep waters, where a traditional wind turbine cannot stand firm. Their height is adaptable, so they can be moved up or down to wherever the wind blows the hardest, which often changes with the seasons. “It’s such a good idea,” agrees Archer. “The attraction is its simplicity in terms of materials and costs.”

These ideas have been around for decades, but the path to using kites, wings or drones to capture wind energy has been bumpy. In 2020, for example, an airborne wind energy company acquired by Google famously folded operations after engineers couldn’t make their system work economically. But others pursuing lighter, simpler versions of the technology, such as SkySails, are going commercial. A 2021 U.S. Department of Energy report to Congress concluded that the idea has a lot of potential, with airborne systems likely capable of harvesting the same order of magnitude of energy as ground-based wind systems in the U.S. But, they add, the technology has a long way to go before it could become an important part of the nation’s energy solution.

Kites produce cheaper electricity than many remote locations are paying for diesel generators.

SkySails actually started back in 2001 with a different purpose: building soft kite wings to pull ships along at sea. The shipping industry has traditionally relied on a crude, dirty fossil fuel called bunker fuel, and the idea was that a wing could, like the sails of old, help to dramatically reduce a ship’s fuel requirements. It was a concept ahead of its time. SkySails expected oil prices to keep rising, making their product more attractive. Instead, oil prices crashed in 2009 (and again in 2014 and 2020). Now, with more stringent requirements from the UN’s International Maritime Organization for ships to reduce emissions, other companies, including a spin-off from Airbus, are making wings to tug massive ships. But back in 2015, SkySails shifted focus to producing electricity with SkySails Power.

Their system — like several others under development — relies on a roughly 150-square-meter, parachute-like wing to ride on the wind. There are no turbines up in the air, and the tether isn’t an electric wire. Instead, the energy is generated on the ground, from the tug on the line. “The brake on the winch is generating the electricity,” says Fagiano. Software flies the kite autonomously in a figure-eight pattern to get the strongest pull possible to produce energy. The system then changes the wing’s flight pattern so it can be pulled in with minimal resistance, expending a little energy to wind it back. This pattern repeats, creating far more energy than it consumes.

It sounds simple, and the power generation system is pretty standard. But Stephan Brabeck, chief technology officer at SkySails, says it took the team around seven years to perfect the flying software, particularly so the wing can safely land and launch autonomously. They have made and sold five units, Brabeck says, with the one in Mauritius the first to get up and running. They reckon that the wing will have to land some 14 times a year because of heavy rain, unsuitable winds or thunderstorms. Occasional hurricanes, which an airborne system can weather tucked away on ground, is what makes the island unsuitable for traditional wind turbines, says Brabeck, an aerospace engineer.

The sails are less intrusive on the skyline than traditional turbines and quieter too, says Brabeck. And they make economic sense, he says, for anyone paying more than 30 cents per kilowatt hour from diesel generators. But there are challenges. Wind turbines can kill or wound migrating birds, and how birds will react to these kites “hasn’t yet been very well studied,” says Fagiano. SkySails has studies underway. The tether on any such system, notes Archer, could theoretically trip up drones or even small aircraft. And if a tether breaks or guidance system fails, a system can crash to the ground.

That might not be a big deal for a soft wing, but other companies are pursuing rigid wings more like a hang glider than a paraglider. These can be more efficient and have better control, but crashes can be a bigger issue, making them a better bet for offshore use. “Essentially, they are aircraft,” says Fagiano. “They will have to reach a level of reliability close to civil airplanes.”

A third, more ambitious option is to make a hard-winged drone that has heavy wind turbines and generators on board and sends the electricity down the tether. This option would produce more consistent energy (without needing to cycle between energy production and energy expenditure), but it’s a hard nut to crack.

“We’re talking about a completely novel technology with a lot of aspects,” says Fagiano. “New turbines. New everything.” Google picked up one such project, led by Makani Technologies, back in 2013. They flew some successful test runs, but the economics weren’t adding up, and in 2020 the Makani project folded. Google released a YouTube movie about the experience and made all Makani’s R&D and patents available for free.

Plenty of other companies are in the race to pick up where Google left off, or to find a better solution. This includes Netherlands-based Kitepower, which has a project in the Caribbean, and Norway-based Kitemill, aiming to make megawatt-scale systems. Others are even designing similar systems that work under the same principle, but underwater instead of up in the air, using ocean currents instead of wind to drive a submarine glider in a figure-eight. SkySails plans to test the concept of an airborne wind farm in the American Midwest before they move offshore. “You need a lot of space,” says Brabeck.

As commercial activity ramps up, says Fagiano, one of the biggest hurdles is regulatory: Airspace rules aren’t designed to accommodate these wings. “It’s chicken and egg,” he says. “So long as there aren’t technologies, they don’t make regulations. Without regulations, it’s hard for companies to raise money.”

With the first commercial pilot products out there, “in remote locations, the costs are already pretty competitive,” says Fagiano. If airborne wind systems start to be mass produced, he says, there’s no question they’ll produce affordable energy. “The question,” he says, “is whether we ever reach mass production.”