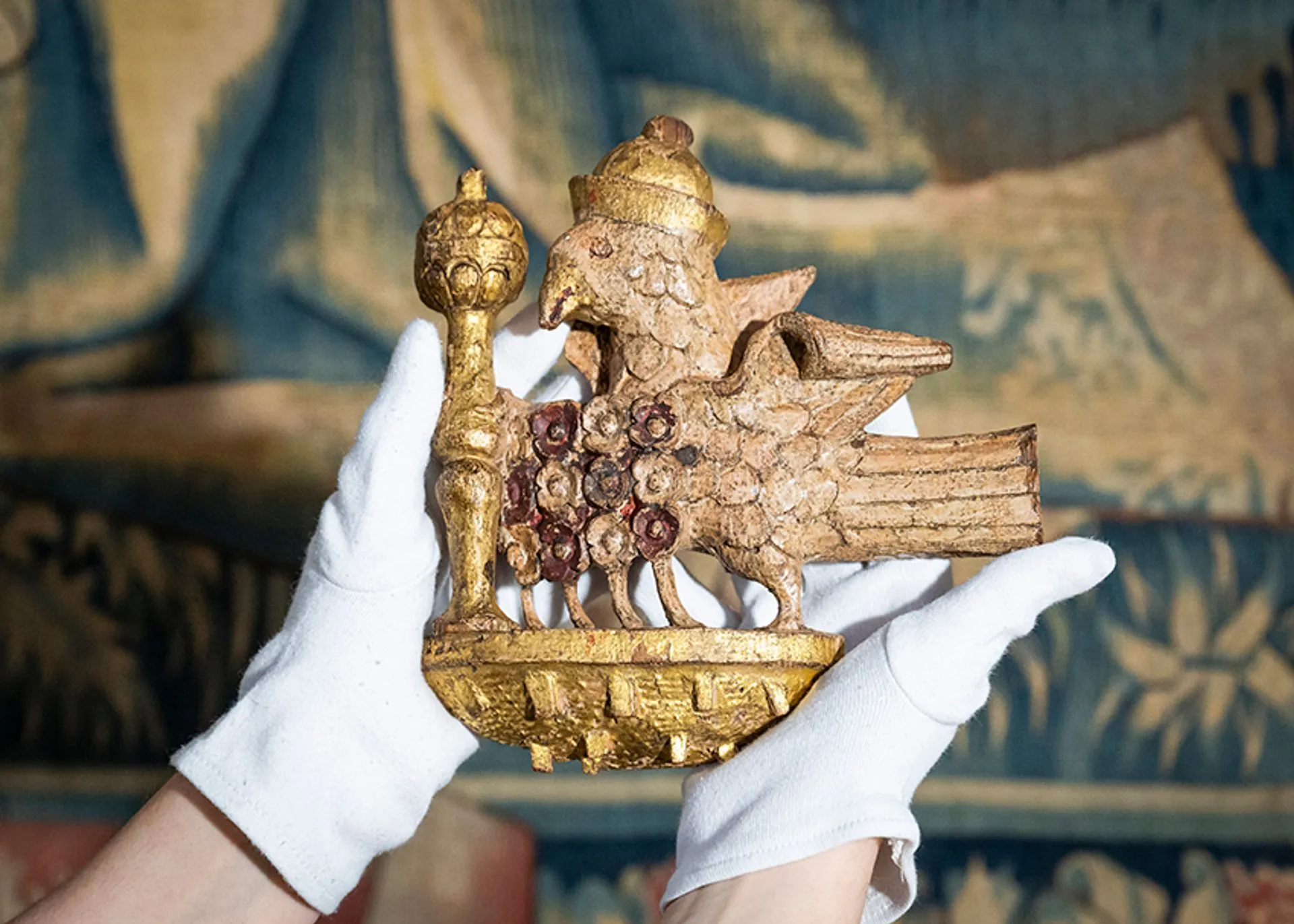 The carved gilded wood falcon that sold for a hundred bucks at auction only to reveal itself to be a 16th century heraldic badge of Anne Boleyn’s removed from Hampton Court Palace after the demise of her marriage (and of her person) has come home to roost. As of March 4th, the 500th anniversary of Anne’s first fateful encounter with King Henry VIII at the court pageant, an emblem of her brief stint as queen has gone on display in the Great Hall of Hampton Court Palace.

The falcon was acquired at auction in 2019 by dealer Paul Fitzsimmons of Marhamchurch Antiques. Fitzsimmons, a specialist in early English oak furniture and artworks, recognized its fine craftsmanship and suspected it might have a connection to the royalty because of the imperial crown and scepter. Once it was liberated from a thick coating of black paint, soot, wax and grime, the original white, red and gold paint were revealed and the falcon was brought to experts at Historic Royal Palaces for assessment.

Having carefully examined the piece, curators at Historic Royal Palaces turned to original accounts of Henry VIII’s work to enlarge and embellish Hampton Court, and to comparing the find with remaining detailing from the period, in an attempt to shed light on the falcon’s origins. This work has revealed an incredible likeness in both size and design to the 43 surviving falcon badges decorating the ‘frieze’ above the windows and hammer beams in the palace’s Great Hall, leading them to believe that the carving is an element of the room’s original Tudor scheme.

The Great Hall sits at the very heart of Hampton Court Palace and was designed both to impress and to proclaim Henry VIII’s power and magnificence. Henry’s carpenters began working on the huge timber roof – the last great medieval hammerbeam-roof hall in England– in 1532, and to celebrate his marriage to Anne Boleyn, motifs relating to the new Queen were incorporated into its design. Her coat of arms, the entwined letters H and A and her heraldic badge were all added to the Hall’s decoration. Given the fate awaiting Anne, the Great Hall was to become an unintended memorial to her reign. Records for the works show that a Michael Joyner was paid £5 4s 2d for 250 ‘of the King’s and Queens badges standing upon the Caters within the said Hall at v[5]d the piece’, bringing the name of the carving’s likely creator to light almost five centuries later.

While tradition has it that after Anne’s execution Henry completely erased references to her from his many homes and palaces, research has revealed that during alterations to Hampton Court Palace following his remarriage to Jane Seymour, two craftsmen (John Heath and Henry Blankston) were employed to repaint and adapt Hampton Court’s existing decorative scheme. It is at this point curators now believe that the white falcons were overpainted in black, thereby severing their visual association with the former Queen.

Fitzsimmons has loaned the falcon to Hampton Court Palace where it will remain for the indefinite future.

Sebastian Edwards, Deputy Chief Curator at Historic Royal Palaces, said: “Ever since my colleague Tracy Borman first flagged the carved falcon badge as a discovery meriting further investigation, it’s been a tantalising historic ‘what if?’. While we won’t be able to say for certain whether it was originally created for Hampton Court’s Great Hall until the next time we erect a roof-height scaffold and compare it with those still in situ – which might not be for some years – the evidence that has emerged during our research lends great weight to the theory, particularly with there being one falcon less than we’d expect in the surviving decorative scheme! Either way, this is an incredibly rare example of Tudor royal ornamentation, imbued with the legend of Henry’s most famous Queen, which I hope will provide visitors to Hampton Court with a small taste of the jaw-dropping magnificence of the palace during the Tudor period.”