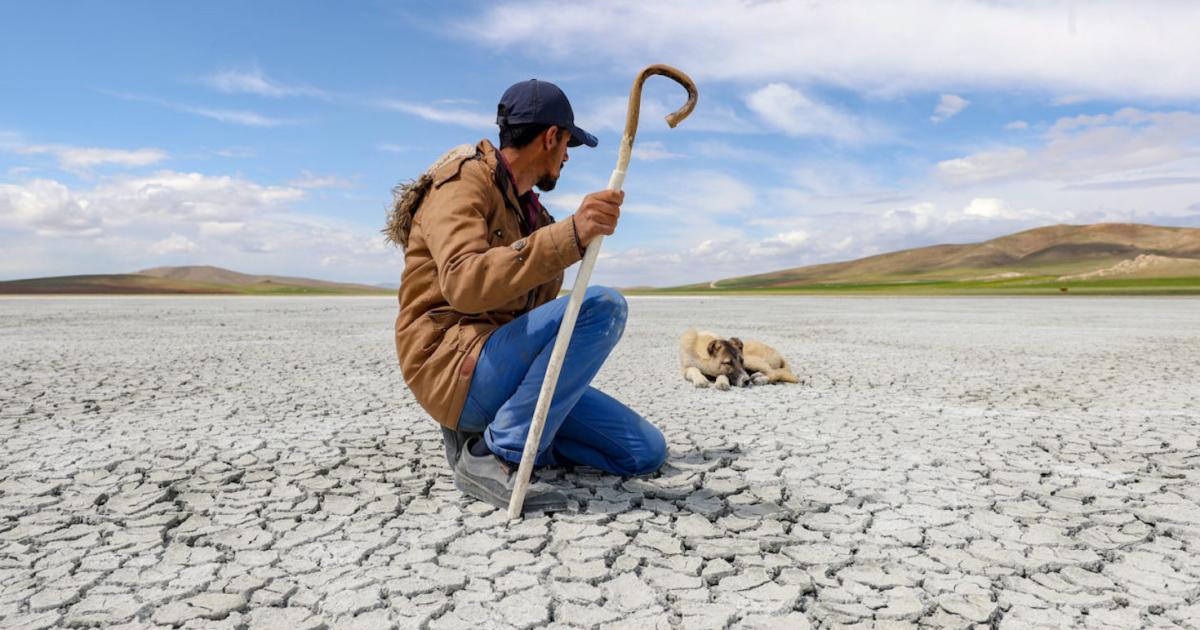 Across Turkey’s sprawling breadbasket, the Konya Basin, wheat withered and fields lay parched this year under the stress of the lowest rainfall in decades. In July, thousands of baby flamingos perished for lack of drinkable water, their corpses entombed in the dried, cracked mud.

This summer, Turkey endured a blistering heat wave with the fiercest temperatures in 60 years. Wildfires raged for nearly two months along its southwestern coast, known to tourists as the Turkish Riviera for its turquoise waters and unspoiled beaches. Market towns and villages emptied as more than 2,000 fires scorched five times more land than usual — close to 770 square miles. At least eight lives were lost and delicate pine forests decimated, taking a tragic toll on natural life, including the ecosystem of the unique pine honey bees.

At the center of Turkey’s woes are severe drought conditions and diminished groundwater levels — caused by a combination of climate change and water management policies — that have taxed water supplies as never before. Power plant reservoirs, freshwater sources, and potable water supplies dwindled to all-time lows this summer, threatening the drinking water supplies of major cities. Meanwhile, on the country’s northern borders, flash flooding near the Black Sea claimed nearly 100 lives.

According to the UN Intergovernmental Panel on Climate Change (IPCC), 60 percent of Turkey’s land area is prone to desertification. Continuing climate and land-use changes could wipe away its soils and turn it into “a terrain not dissimilar from Badlands National Park in South Dakota,” said Karim Elgendy, a sustainability expert concentrating on the Mediterranean at Chatham House, a London-based policy institute.

This, say climate scientists, is the new normal in Turkey and the surrounding eastern Mediterranean region.

Turkey is one of just six countries that hasn’t yet ratified the 2015 Paris Agreement, which commits signatories to take steps to limit global warming to between 1.5 and 2 degrees Celsius. Earlier this month, Erdogan signaled his intention to complete ratification in time for the UN climate conference in Glasgow in November. But he shows no signs of rethinking Turkey’s economic policies, which since 2000 have catapulted it near the upper echelons of Europe’s economies. Erdoğan has encouraged investment in intensive agriculture, manufacturing and tourism to provide jobs, and massive coal and hydroelectric projects to supply power. Population growth and movement to cities has created vast, unchecked urban sprawl, where grasslands and wetlands have been sealed with concrete.

While some cities and ministries within Turkey are fighting back against the federal focus with their own programs to protect the environment and address water shortages, experts say it’s too little too late.

This summer, on the Italian island of Sicily, a swelting temperature of 120 degrees Fahrenheit shattered European records. To combat blazing wildfires, the European Union dispatched firefighters and water-dropping planes to Italy, Greece and Albania. Drought scoured Spain for yet another year, advancing desertification that affects a fifth of its territory. The chronically water-stressed eastern Mediterranean fared no better: In Syria and Lebanon, many crops failed due to rising temperatures and drought conditions that have escalated over two decades.

But even within this hotspot region of warming, Turkey stands out. “Already temperatures in Turkey are 1.5 degrees [Celsius] higher than 50 years ago,” said Barış Karapinar, an associate professor of climate change policy and lead author of the IPCC’s Fifth Assessment Report. He claims that temperatures in Turkey could jump as much as 7 degrees Celsius over 1950 levels by 2100 — a terrifying prospect that egregiously overshoots the Paris Agreement’s global upper limit. This worst-case scenario, says Karapinar, would turn parts of the Mediterranean region into “hell,” making much of it uninhabitable. “Everything about daily life will change for the worse,” he warns.

Nowhere does the collision course of Turkey’s industrial growth and climate change come to a head more strikingly than in agriculture. Since the 1980s, policies have supported lucrative cash crops, transforming Turkey into the world’s seventh-largest agricultural producer and a top exporter of crops ranging from cereals and fruit to tobacco and tea. The sector is a workhorse for the economy. As Turkey’s largest employer, it supplies jobs to nearly a fifth of the workforce and has risen to account for 6 percent of the country’s economic activity. Damningly, it also accounts for almost 75 percent of the country’s freshwater use — a figure that experts warn is not sustainable.

The switch to water-intensive cash crops has depleted groundwater aquifers and dried out river systems.

The switch to more water-intensive cash crops has dramatically depleted groundwater aquifers and dried out whole river systems. Sugar beets, corn and cotton typically thrive in climes with three to four times as much rainfall as Turkey receives. “In just a decade our water use has gone up by a third,” said Doğanay Tolunay, a land-use specialist at Istanbul University.

This, Tolunay continues, has forced many farmers to drill illegal wells that tap already-low groundwater. When groundwater reserves can no longer replenish lakes, rivers and wetlands, farmers then have even less surface water for irrigation, and everyone has less drinking water.

Agriculture‘s staggering water consumption is also due to the ages-old irrigation techniques of Turkey’s farmers: open channels and raised canals that deliver water to crops overland. According to Turkish officials, these systems suffer water losses of 35 to 60 percent through evaporation, seepage and leakage.

The strain is easy to see: For the second straight year, farmers in the central province of Konya, the northwestern province of Edirne and coastal İzmir reported below-average harvests of wheat and other crops, forcing Turkey to increase grain imports.

Likewise, Turkey’s widespread use of hydroelectric power is sapping water supplies. The world’s ninth-largest hydroelectric power producer has dammed just about every river in the country, including the iconic Tigris and Euphrates Rivers. While hydropower is a renewable energy source, it dries out aquifers and creates water scarcity downstream of the dam. Reservoirs can lose thousands of liters per second to evaporation, according to Vienna-based NGO RiverWatch.

Moreover, Turkey’s urban and agricultural expansion has come at the cost of grasslands and wetlands, ecosystems that help to absorb carbon, buffer the impacts of intense rain or drought, and filter groundwater. Since 1950, the country has lost between 3.2 million and 4.9 million acres of wetlands to farmland, highway projects, airports, hydropower reservoirs, factories and urban neighborhoods. “These losses, which continue today, greatly reduce the ecosystem’s potential for adaptation and resilience,” says Karapinar.

As Turkey gets drier, forest fires are becoming a more pressing concern. Since the 1970s, the country has focused on the planting of sprawling commercial monoculture forests of pine, a tree that burns easily and creates fodder for wildfires. “Forest fires are nothing new around here,” says Karapinar. “But by planting pine trees rather than trees more resistant to fire, you have much larger wildfires.”

To fight desertification and regrow forests lost to fires, Turkey’s environment ministry launched an initiative in 2003 with the goal of planting 7 billion trees by 2023. Among the varieties are pines but also cedar, birch, walnut, mulberry and ash trees, which require less water.

Holding out hope that the situation is dire but not futile, experts say Turkey must devote significant budget resources to adaptation measures. Most important, said Tolunay, “Turkey has to have a water management policy that is more than just words on paper.”

Agricultural subsidies, for example, must be rechanneled to encourage farmers to grow less water-intensive crops, such as barley and lentils. And farmers must be helped to adopt closed irrigation systems, such as drip and sprinkler networks, which are much more efficient than the open systems. Rainwater harvesting and strategic re-use of gray water could cut water consumption by 40 percent, say experts.

In Izmir, Turkey’s third-largest city, environmentally minded locals are working together with the EU and Turkey’s environment ministry to increase the region’s resilience. The city has a “green action plan,” and this spring, 11 Turkish mayors — including Izmir’s — signed an Alternative Water Management Manifesto that calls for managing water demand by regulating usage in agriculture and industry, as well as encouraging gray water and rainwater harvesting for household use.

But these well-intentioned initiatives pale in contrast to the enormity of the task at hand, experts say. “The current system is unviable, and tweaking it won’t fix it,” says Trine Christiansen, who focuses on water assessments at the European Environment Agency. “We need to change the way we produce food and energy. If we don’t tackle the systemic logic of ever-increasing efficiency, ever-more output, we’ll not see any great progress toward environmental improvement.”

To ward off the worst, Turkey has to rethink its full-speed-ahead growth strategies, says Christiansen. Otherwise, Turkey and its neighbors must acknowledge that vast swaths of their territory will soon be unfit for life.