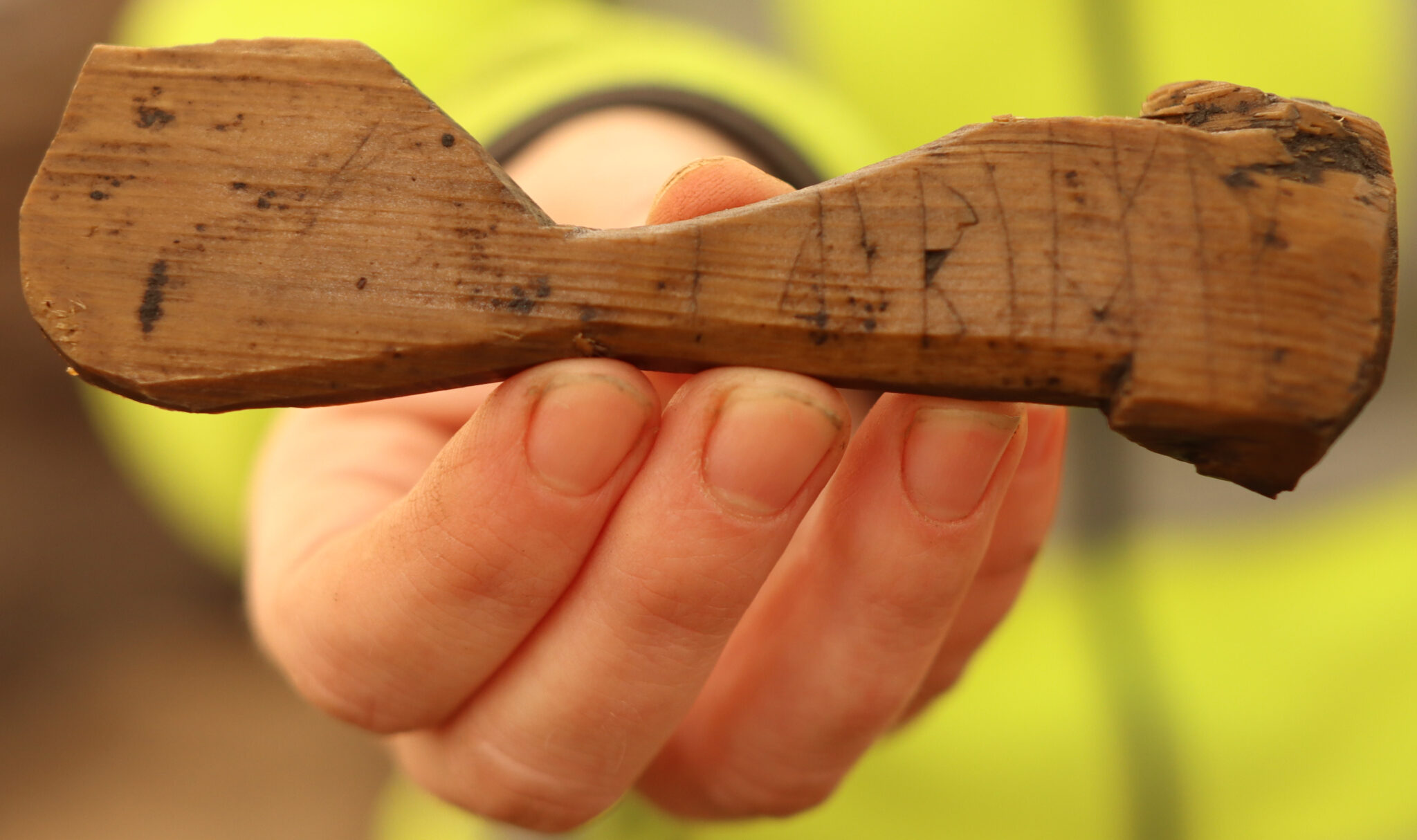 The Medieval Park excavation in the historic center of Oslo has unearthed another runic inscription. This is the third rune find in Oslo in a month and a half, the second on wood. (The other was inscribed on a cow or horse bone). Rune finds in Oslo are usually very rare, so this is a relative bonanza. It was found in the same archaeological layer as the falconry figurine which dates it to the 13th century.

The piece of wood is 11.4 cm (4.5 inches) long and wide on the ends with a notch cut in the middle. One the flat side are eight runes, carved in the surface to follow the shape of the stick which means they wood was carved first and the runes added to it.

The runes were translated by Kristel Zilmer, professor of runology at the University of Oslo, who identified it as an owner’s inscription.

“The name is spelled as asbin , and it probably stands for Ásbjǫrn , Asbjørn. The rest of the text in Norse is á mik which means ‘owns me’.” […]

“Owner inscriptions are a common type of medieval inscription,” Zilmer further explains. The texts contain personal names, alone or together with the verb “owner”. Sometimes it is also mentioned what the person owns.

“The label from Oslo uses the expression ‘owns me’. This is a well-known expression in the rune material – the object itself takes the floor. Some other inscriptions that contain the pronoun ‘me’ are master formulas that tell who made the object,” says the professor.

The irregular shape of the wood suggests it was cut to a specific shape for use as a label. The shape might represent something about the owner, a stylized branding device. It would have been mounted to something in order to mark that something as Asbjørn’s property. There are no remains in the excavation layer that might attest to what materials the marker was labelling, but archaeologists believe they may have been trade goods.

Finds of such markers can help illuminate the city’s trading activity. Maybe the stick was thrown when Asbjørn no longer owned the item? In that case, it is hardly thrown far from where the goods were stored or sold. […]

The town’s artisans had their stalls along the streets and sold products such as shoes and boots, chambers, iron tools, weapons, fine forging products, turned and made vessels, as well as foods such as bread, meat products and fish.

Larger lots of goods were sold directly from the apartment buildings or from the boathouses.