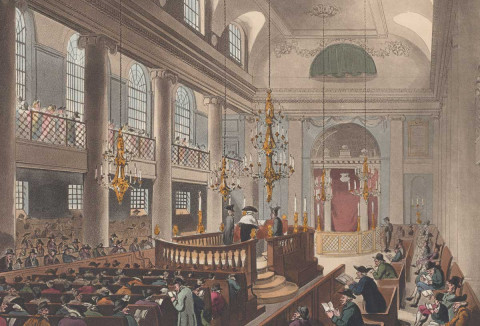 In 1791 Edmund Burke, ‘the father of British conservatism’, commented that:

We have in London very respectable persons of the Jewish nation whom we will keep: but we have of the same tribe, others of a very different description – housebreakers and receivers of stolen goods and forgers of paper currency – more than we can possibly hang.

Burke prefigured Churchill, after the Bolshevik ascendency to power in 1917, in distinguishing ‘good Jews’ from ‘bad Jews’. Burke, as someone of Catholic heritage, was deeply affected by the French Revolution and feared that the 15,000 Jews in a country of nine million were potential subversives. Indeed, a Catholic influx from Jacobin France accentuated this fear of spies and initiated the Alien Act of 1793, the first legislation to attempt to control immigration. Yet, as Jeremy Smilg points out, the ‘bad Jews’ were in fact impoverished Ashkenazi Jews, peddlers and petty traders, who had come from Poland and Germany during the 1760s. They were looked down upon by their more acculturated Sephardi cousins, originally from Inquisition Spain, whom Cromwell had allowed in more than a century before.

Jews were negatively caricatured in sketches by renowned artists such as James Gillray and Thomas Rowlandson and all this fed into the stereotypes promoted in Christian Europe, playing into the depiction of Jews as Christ-killers, exploiters and shysters. There were liberal protests against such imagery, such as the positive depiction of Jewish characters in Richard Cumberland’s play The Jew in 1794. Yet even figures like the reformer William Cobbett found such tolerance difficult to stomach. There was undoubtedly concerted support for a series of ‘Gagging Acts’ to suppress perceived seditious writings during the 1790s when the Revolution was at its height in France.

Many were shocked at the overthrow of religion and its displacement by ‘the Cult of Reason’. General Bonaparte’s liberation of the Jews from their ghettos in Italy provoked further distrust in Britain. This was followed by the killing of Jews in Siena and the sacking of the ghetto of Pittigliano by opponents of the French Republic. Jews at the time were rumoured to be planning the invasion of Britain with Napoleon.

The formal response of the Anglo-Jewish community’s leadership had previously been to avoid all political comment, but now they began to issue patriotic statements of support for Nelson after the battles of the Nile and Trafalgar and to compose prayers of grateful thanks for George III’s narrow escape from assassination. Well-to-do Jews such as Benjamin and Abraham Goldsmid treasured their friendship with the Prince of Wales, while a hostile attitude was exhibited towards French Jewry.

Yet there were dissident voices. Jeremy Smilg has reclaimed the writings of Isaac D’Israeli, who challenged Burke’s disparagement of Jews and his advocacy of deporting ‘bad Jews’ to revolutionary France. This D’Israeli has been overshadowed by his more famous son and future prime minister, Benjamin.

Jeremy Smilg’s book is an excellent contribution to the history of England’s Jewish community. Most histories focus on the period of the admission of the Jews in 1656, or the mass emigration from Russia after the anti-Jewish May Laws of 1882. This book examines the interim, the significant period between the fall of the Bastille in 1789 and the Battle of Waterloo in 1815. It is well worth reading.

Colin Shindler is emeritus professor at SOAS, University of London.