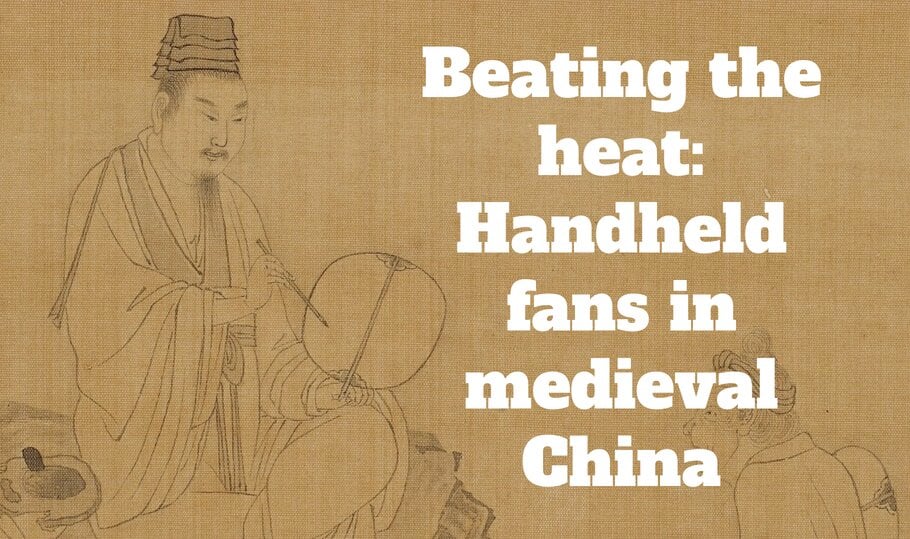 The handheld fan has been used as a means to keep cool since time immemorial. But in medieval China, this was just one of its many functions.

It is said that one summer day in the 300s, Wang Xizhi, one of the all-time legends in the art of calligraphy, whose style has been used as a model to the present day, was taking a leisurely stroll in the local mountains. Already a calligraphic rockstar in his own time, on this outing he had so far managed to go unrecognized. But the sunny day had turned out to be hotter than he had counted on. As he tried to think of a way to stay cool, he spotted an old lady by the roadside who happened to have six fans laid out before her for sale—perfect timing!

Wang Xizhi picked up one of her handmade fans for himself, and apparently feeling a bit generous on account of this fortuitous encounter, whipped out his writing brush and dashed off some random quotes on the other five. The old lady was seething. She glowered at him—who would buy the fans now that some random hiker had defaced them with his scrawl?  But before she had a chance to protest—or maybe smack him with one of the fans—he spoke up. “Just by telling people these words were written by Wang Xizhi,” he told her, “You’ll be able to make one-hundred coins per fan.” And off he went, leaving the puzzled old lady in his wake.

The old lady followed his suggestion, and as soon as word spread about the fans, prospective buyers were falling over each other to get their hands on a Wang Xizhi original. This is a scene that continues to replicate itself in the present day: in 2010, a fragment of calligraphy thought to be by Wang Xizhi sold at auction for $46 million.

Wang Xizhi’s action of writing on the fan was not as random and eccentric as it might feel to some readers, for decorating fans with calligraphy was a well-established practice. Handheld fans were two-sided (literally, yes, but also in terms of function). Their first role was as an object of use with the ability to conjure up a breeze and offer shade from the sun. The second was as a blank canvas, waiting to be adorned with painting or calligraphy. And so, the six fans encountered by Wang at the start of the story had, by the end, been sent off towards two separate destinies. Five of them were sold by the old lady to an appreciative crowd of calligraphy aficionados, and the sixth was carried off by Wang Xizhi and earned him some (also much-appreciated) breeze. In other words, among the six fans in the story we find representatives for both functions.

The “what happened next” for these six fans is easy to guess. The sixth fan would have provided Wang Xizhi with several summers of service, involving repeated exposure to heat and humidity. It would have passed between sweaty hands before the general wear and tear meant it was time to get a new one. And this would occasion its retirement, be that in the form of disposal, recycling, or perhaps being passed on to one of his servants. As that scenario played out in the Wang household, the calligraphic pedigree of the other five fans had meanwhile granted them a more privileged lifestyle. As objects of beauty and study, they would have been proudly shown off, passed down, sold on, and collected. When a heatwave struck, such fans were to be found stored safely inside, not being flapped around frantically by the window.

As a result, a huge number of decorated fans have survived in excellent condition for their age. After all, these objects are made of natural, perishable materials; the fact that so many have come down to us is precisely because they were so often prized for the calligraphy and/or paintings they bore. The difference between random scrawl and the handiwork of a master could not only reverse the family fortunes of a lowly fan-seller, but also destine a given fan to survive into modern times. Today, we are accustomed to viewing them as circular or arched images which have been detached from any original handle or ribs that may have existed, then mounted onto a backing and displayed, for all intents and purposes, like paintings.

Then what of the objects of use—those “sixth fans”? Today, examples of well-used fans are exceedingly rare. As with many kinds of artifact, there is a huge disconnect between what we see displayed in museums and art galleries and what was actually keeping the likes of Wang Xizhi cool in the heat. Luckily, in this case the written record can step in to fill the gap.

Synonymous with summer days and relaxation time, fans make a frequent appearance in the diaries and poems of the Southern Song period, for example. We hear the most about the palmetto—or pukui—fan, a round fan woven from the dried leaves of a palm tree. Silk, paper, banana leaves, and feathers were also common materials for handheld fans.

The Song was a big time for fans: this was also when the game-changing folding fan, held together with ribs of wood or bone became more widespread. Emperor Zhangzong (r. 1189–1208) of the Jin empire to the north once wrote an ode to extol what he called a “congregation of bones” (jugu shan) due to how the ribs (=bones) that gave the folding fan its structure would disperse when the fan was spread out, only to be pulled back into a single union when the fan was snapped closed. According to the ode, amid the hectic business of court, he took solace in knowing the spindly fan was tucked up in his sleeve. For this emperor, the sensory change of scene brought about by the feel of its spring-like breeze, the scent of the fan’s fragrance, and the sight that burst into view when the fan opened to reveal its flowery pattern was a moment of escape from his immediate surroundings, a chance to reset and refocus before getting back to the never-ending flurry of imperial responsibilities.

But it was the humble palmetto fan that seems to have accompanied most writers through the sweltering heat of the summer. The palms used to make them were native to the southern regions, where the weather was hotter. One resident of this area was Yang Wanli (1127–1206). Yang seems to have been particularly sensitive to the heat; his repertoire contains multiple poems recounting elaborate attempts to outmaneuver it.

One autumn saw the unlucky Yang caught by some unseasonably hot weather. This prompted him to compose a set of three poems, which read a little like the diary of a stranded desert island castaway as he slowly loses his sanity:

How terrible that the autumn breeze is still keeping us waiting! But early or late, what does it matter? The Moon Goddess has been flapping her fan all night long; when morning comes you know it’s gonna be as hot as noon!

That airhead Autumn God is back from his annual vacation, but there’s been some kind of mix-up at the baggage claim. Instead of his usual feathery raincoat, he’s gone and picked up the Flame God’s Umbrella of Fire!

I’ve been flapping the palmetto fan for so long that my arm’s gone numb, yet lying on this “cooling” bamboo bed there’s been no change in temperature whatsoever. My face is cold, but I can feel the sweat start to form at the roots of my mustache. Looks like I’ve managed to fetch the morning well-water without so much as opening the trapdoor!

Dr. Elizabeth Smithrosser holds a PhD in Chinese history from the University of Oxford. She is currently a Fellow at the International Institute for Asian Studies, Leiden. Click here to see her Institute page.