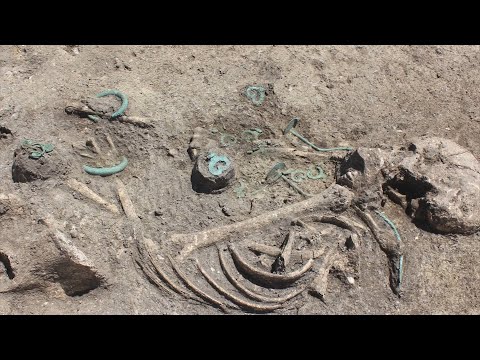 Archaeologists have unearthed the richly furnished grave of a young high-status woman in a small Bronze Age cemetery near the town of Mány in northern Hungary. It was one of several graves discovered at the site in a preventative archaeological exploration along the route of planned highway construction. The team of archaeologists from the Szent István Király Museum discovered eight burials from the Middle Bronze Age Tumulus culture which dominated Central Europe between 1600 and 1200 B.C.

The grave of the young woman was unique for its luxurious contents. She was buried 38 objects — mostly jewelry and garment fittings — made of bronze and precious metal. She wore a ring on every finger, bangles on both wrists, bronze spirals and a gold spiral ring found near her skull that was likely a hair tie. Also found buried with her was the bronze blade of a dagger with three rivets that attached the blade to the now-missing handle (likely an organic material like wood that has

decomposed). Two long, serpentine bronze pins with broad circular terminals were found at her shoulders, likely part of her clothing. While no textile remains have been identified so far, the metal adornments are so copious that archaeologists believe they can reconstruct the garment she was buried in. Several small pieces of pottery typical of Tumulus culture graves were unearthed as well.

There were no raised tumuli or other markers of the graves. The area has been thoroughly cultivated over the centuries, flattening the mounds over the burials. The remains were found less than 12 inches under the topsoil, so it was only fortunate happenstance that any graves could be found with contents undisturbed, especially since the other seven burials only contain fragile pottery grave goods.

In addition to the burial ground, archaeologists also discovered remains of a Bronze Age settlement at the site, as well as traces of Iron Age Celtic occupation.

This video is in Hungarian and has no captions (translated or otherwise), but you can see the full complement of recovered artifacts from the grave bagged and tagged in the laboratory.