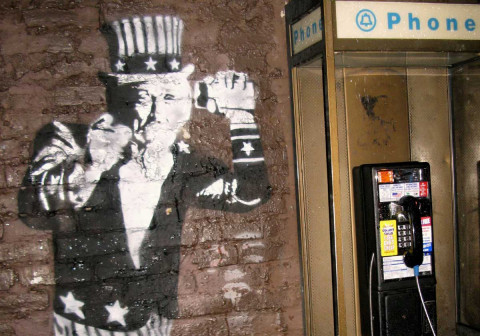 When wiretaps were first used in British military campaigns in the 1880s, soldiers called the practice ‘wire milking’ and the tappers themselves were known as ‘milkmen’. By 1955 the technology had developed substantially, spreading to domestic use. In that year an anonymous tip led the New York police to a ‘wiretap nest’ that had lines into almost every apartment and office building on the East Side of Manhattan, collecting industrial and personal secrets to use for blackmail and profit. Brian Hochman’s The Listeners: A History of Wiretapping in the United States has a serious question at its heart: how did concerns about the dangers of wiretapping, once called a ‘dirty business’ by Supreme Court Justice Oliver Wendell Holmes, go from the mainstream in American culture to the margins?

Hochman’s book is also a fun read, full of the kinds of strange historical trivia that turn the reader into a factoid machine at the dinner table. A wiretapper during the American Civil War claimed, Hochman writes, to be able to put ‘both ends of a severed telegraph line against his tongue and “read” the incoming electrical signals as they pulsed through his mouth’. It is quite an image.

Spanning a century and a half, this is a history of uneasiness and discomfort with the way an emerging technology can reshape the nature of private and public life. In 1929, John C. Schafer, a Republican congressman from Wisconsin who was a ‘wet’ (in favour of repeal) during Prohibition, introduced a bill to prohibit any use of wiretapping as evidence in the courts of the United States. In a speech on the House floor, Schafer solidified his side’s emotionally potent argument against this method of gaining information:

Any individual, be he a Government officer or not, who invades the privacies of the person and home of an American citizen by tapping telephone or telegraph wires, is one of the most despicable specimens of the human race.

The bill did not become law, but the mixed, and mostly negative, public sentiment about electronic surveillance prevailed throughout the 20th century. This was even the case, as Hochman points out, during the Cold War, which Americans remember as a time of ‘witch hunts and civil liberties rollbacks’, but during which ‘the surveillance state was by no means monolithic or even coherent’.

There’s a great deal of delightful cultural history here; this is a book popping with interesting illustrations of the technology used over the years to tap telegraphs and telephones, as well as newspaper cartoons of wiretapping nests and eavesdropping private eyes. If there is a slightly bogged-down feeling in the sections which deal with wiretapping’s legality, as the action moves to Congress and the minutiae of policy debate takes the place of pulp novels and popular exposés as the book’s objects of analysis, Hochman struggles mightily against it and mostly succeeds.

And, after all, any study of wiretapping needs to toggle back and forth between culture and law to show how the United States became a nation of proud ‘freedom lovers’ who also willingly accept Facebook and Google making fortunes from their data. For anyone looking for a prehistory of the ambivalent and paradoxical aspects of American thought around digital surveillance, this is your book.

Rebecca Onion is a staff writer at Slate and the author of Innocent Experiments: Childhood and the Culture of Public Science in the United States (University of North Carolina Press, 2016).