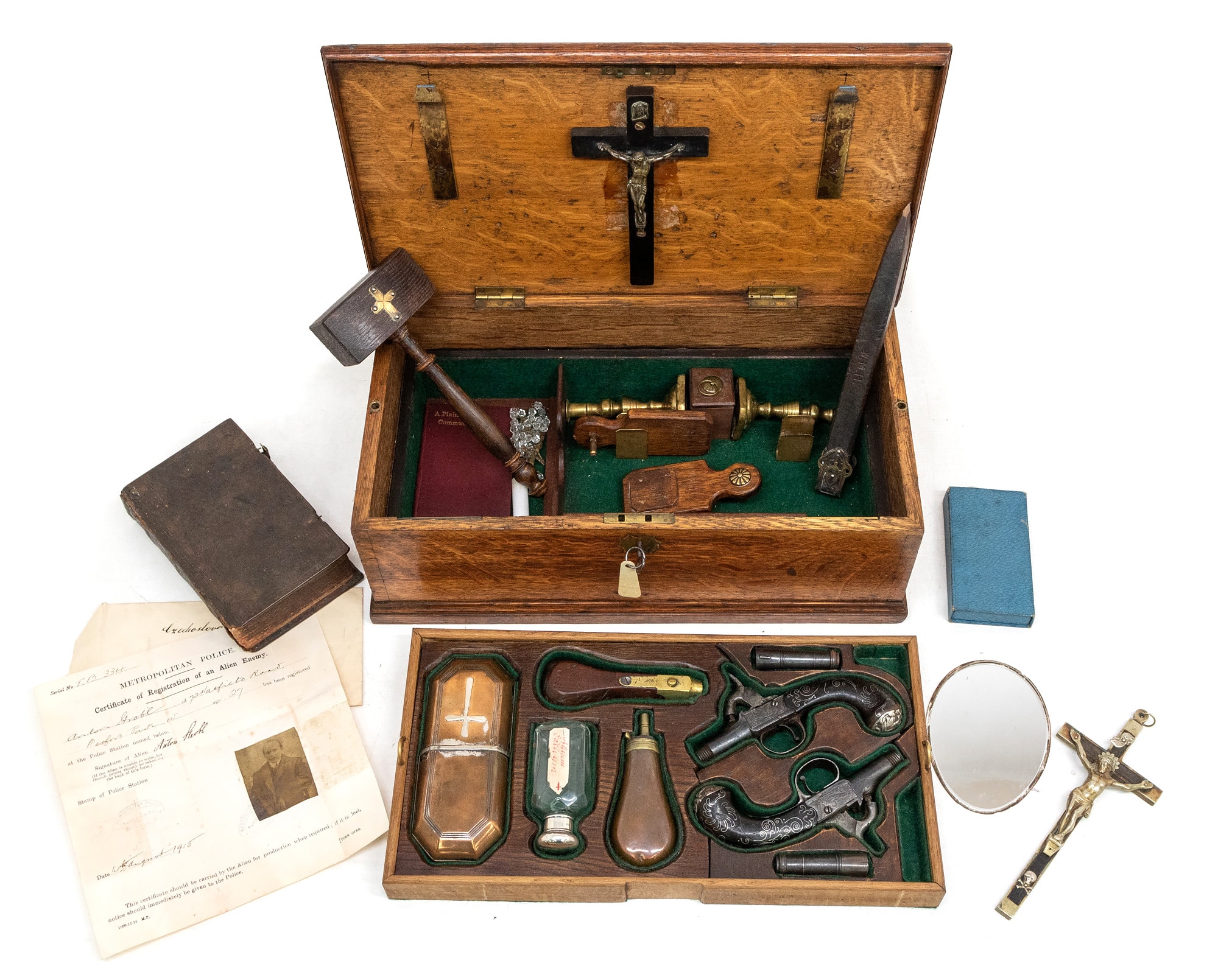 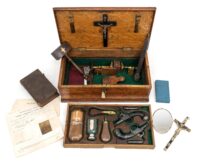 The lure of the vampire legend as interpreted by Bram Stoker in the late 19th century underpins this result. So-called vampire-hunting kits were popular tourist souvenirs sold to travelers on the Continent in the late 19th and early 20th century. They were often a thrown-together assortment, like the one that sold at Hansons Auctioneers in 2020 which was filled with random objects like a pocket knife, a bottle of shark’s teeth and an ivory figurine of a wolf monk.

At least the most recent example has the classic weaponry anyone of Van Helsing propensities would seek out. The oak case is decorated with two brass crucifixes on the lid that doubled as secret locking devices should the lock and key (also still present in the lot) fail. Inside the box is a lift-out tray with fitted slots for a pair of small pistols, a powder flask and a holy water bottle. Under the tray are compartments containing a Gothic Bible, a wooden stake and mallet decorated with metal accents, a pair of brass candlesticks, another crucifix, a mirror and a rosary.

The case, the mallet and stake are all personalized with the initials WMH for William Malcolm Hailey, 1st Baron Hailey (1872-1969). Auction experts have dated the box to the late 19th century, a time when Hailey was still young and just starting out on what would become a very successful diplomatic career. He would climb the ranks to become Governor of the Punjab from 1924 to 1928 and Governor of the United Provinces from 1928 to 1934. He was knighted in 1921 and raised to the peerage in 1936. He later worked as Director of the African Survey.

There is nothing in his career trajectory in the Indian Civil Service that checks off specific vampire-hunting boxes, nor are there any personal records that would explain the link here. It’s also not clear when exactly it was created, acquired and customized.

Still, the kit is clearly designed from the ground-up for the express purpose of vampire slaying, unlike so many others sold at the time, and even more uniquely, it has an unshakable provenance connecting it to one known individual who owned it and perhaps even commissioned it.

Charles Hanson, owner of Hansons Auctioneers, said: “Interest in this item ahead of auction, both from potential buyers and media outlets all over the world, was intense. It attracted strong advance bids. Nevertheless, the result exceeded all expectations. Bids came in from across the globe including France, America and Canada – and the news story about the find went viral.

“It made headlines galore as far afield as Australia and America. Objects like this fascinate both collectors and people in general – and this vampire kit had particularly interesting provenance.

“It originally belonged to Lord Hailey, a British peer and former administrator of British India. Whether through fear or fascination, it’s interesting to know a member of the highest aristocratic social order, a man with a place in the House of Lords, acquired this item. It reminds us that the vampire myth affects people from all walks of life. I think the aristocratic connection made this object even more desirable and, perhaps, helped it on its way to a particularly strong result.”