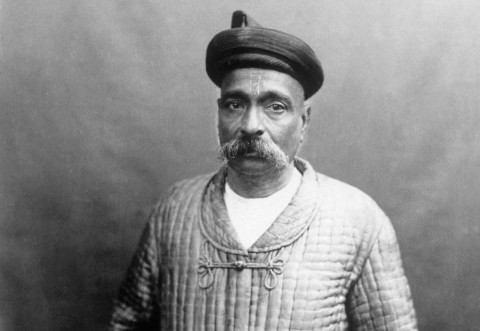 Anyone who has studied international relations will be familiar with ‘realism’ and its metaphor of nation states as billiard balls, practically identical and always colliding. The gist of it is that material realities – the economy and the structure of the international system – are all that matter. Ideology is wishy-washy humbug.

In her intellectual history of what she calls ‘the Indian Age’, Kapila reverses this conceit. Here ideas command centre stage. The result is an ambitious reconstruction of the thinking that drove India’s political elite in the half century before independence in 1947.

Anti-statism is her Ariadne’s thread. Whatever intellectual current India’s founding fathers subscribed to – Hindu nationalism, pan-Islamism, pacifism, insurrectionism – they were united, Kapila argues, by a scepticism of state power. It is a seductive thesis, but I am not convinced. Take Bal Gangadhar Tilak, one of India’s most prominent early nationalists, quaintly (and inaccurately) described here as an ‘obscure figure’. In Kapila’s account, Tilak offered a defence of individual sovereignty, later counterpointed by the embrace of state sovereignty by nationalists such as B.R. Ambedkar and Jawaharlal Nehru. It appears to me, however, that in framing his politics in religious terms of sacrifice and duty, Tilak was simply making the case, in his own homespun manner, for popular sovereignty. Inconveniently for Kapila, moreover, Tilak’s own writings make it clear that he was a supporter of representative government. Not for nothing did he extol the regicide of Charles I and the Interregnum.

History can be a tribal turf war these days. Kapila’s dictum, that ideas, not material interests, are ‘the ruling principle of political life’, is no doubt a noble one, but it also shows the obvious limits of intellectual history – the kind that is proudly oblivious to political history, at any rate. We never learn, for instance, that Tilak was one of the prime movers of the Home Rule League, modelled on Sinn Féin. The objective, if anything, was to wrest the keys of government from the Raj. So much for anti-statism.

Nor were India’s pan-Islamists anti-statist. Abul Kalam Azad and his millenarian ilk hoped to establish a Muslim state complete with separate sharia courts, fiscal authorities and even rulers. Azad pushed for his own coronation as amir-e-hind, king of Muslim India.

Kapila is more convincing when she suggests that the Ghadar Movement – founded by expatriate Indians with the aim of overthrowing the Raj – lacked ‘fidelity to any specific ideology’, but less so in reading their atomised organisational structure through an anti-statist lens. There is a rather mundane reason why ghadris ‘individualised insurrection’: they were trying to evade colonial censors and spies. Not so much anti-statist, the folksy leftism of Har Dayal  – one of the movement’s key figures – was popular with his many mistresses and Stanford’s ‘lady students’ but hardly anyone else. By turns an internationalist and nationalist, atheist and Buddhist, terrorist and pacifist, he even came, belatedly, to defend the British Empire, declaring it ‘a fundamentally beneficent and necessary institution’ to forestall the ‘German, Turkish, and Mohammedan’ barbarians at various gates. Small wonder that Ghadar was ultimately of little account.

What of Gandhi’s anti-statism, premised on so many autarkic ‘village republics’? When push came to shove, the Mahatma could sound like any jingoistic general, cheering departing warplanes and Nehru’s irredentist designs on Kashmir. Finally, there is the elephant in the room: the simple fact that the state, in this period, was an imperial state and opposition to it was not so much anti-statist as anti-imperialist.

With decolonisation, Kapila argues, sectarian and confessional allegiances gave way to republicanism and the rule of law. ‘The people’, as it were, were forged in the crucible of ‘civil war’, the violence that accompanied Partition, Hindus and Muslims slaughtering one another. This is a fascinating argument, but it is a flawed one. In the final analysis, ‘the people’ were fashioned in the three devolution acts of 1909, 1919 and 1935, all of which expanded the franchise and transferred power, piecemeal, into Indian hands. The notion of the republic was of older vintage than Kapila admits, having gained currency since at least the Khilafat movement (also known as the ‘Caliphate’ or ‘Indian Muslim’ movement) in 1920, when the winds of Turkish republicanism blew across the subcontinent. What is more, far from heralding a new age of state sovereignty, Vallabhbhai Patel, ‘India’s Bismarck’, could be perfectly anti-statist when it suited him, exhorting, in tones worthy of the US National Rifle Association, the people to arm themselves and not ‘run [to] the police but do the work of policeman yourself’.

Such limitations do not detract from the merits of the book. Indeed there is much to profit from Kapila’s illuminating intellectual profiles. Muhammad Iqbal is recast as India’s Luther, essentially seeking to reconcile Islam with nationalism. Tilak, we learn, virtually singlehandedly ‘invented’ mass politics by welding religion and politics. If Gandhi turned the other cheek, Kapila argues, Tilak felt that the ends justified the means. The violent Ghadar Movement, she suggests, was in many senses a harbinger of Gandhi’s creed of individual self-sacrifice. Vinayak Damodar Savarkar’s Hindu nationalism discarded fantasies of racial purity and extirpation for a friendship between faiths, albeit one born out of a war that rendered Muslims subordinate to Hindus.

In short, the sum of the parts is greater than the whole, which only goes to show that history is often a rather messy affair. Imposing too schematic a theorisation comes at a cost. Ideas don’t operate in a vacuum. And humans aren’t billiard balls.