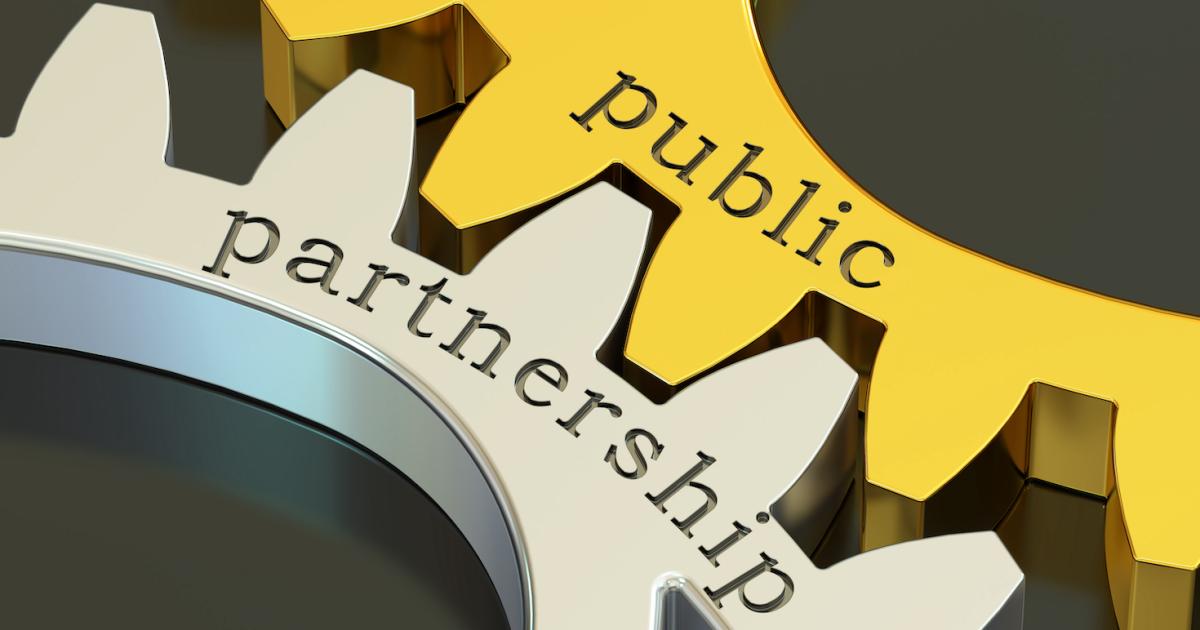 The current chapter of the Anthropocene epoch, characterized by a Code Red for humanity, demands an “all of the above” approach to climate solutions. While it is the public sector’s role to lead on policy that protects society’s broad interests, the recent COP26 in Glasgow, Scotland, was, as GreenBiz’s Joel Makower wrote, in many ways the “business COP.”

The private sector’s commitment to stepping up to lead on climate solutions, or at least purporting to, is not new. But what stood out in Glasgow was the prevalence of public-private initiatives, some of which were seriously substantive.

One that caught my attention was BlackRock’s Climate Finance Partnership (CFP), a public-private fund that will target investments in countries across Asia, South America and Africa that aren’t part of the Organization for Cooperation and Economic Development (OECD). The Glasgow Financial Alliance for Net Zero (GFANZ) crowded headlines with its eyebrow-raising $130 trillion commitment to global transition finance — although that is a figure that Thomas O’Neill, InfluenceMap co-founder and now founder of Universal Owner, says “at best, $50.7 trillion should be removed from.” That position is based on Universal Owner’s analysis of the Net Zero Asset Managers Initiative, which found that the group has not committed asset managers to align themselves with climate science.

I wanted to learn more about BlackRock’s CFP, an innovative structure in which “each dollar of catalytic funding from public development banks and philanthropy has attracted $4 of institutional capital,” according to BlackRock’s vice chairman, Philippe Hildebrand.

In an interview conducted via email, Rael McNally, lead portfolio manager for the CFP, helped to make me smarter about the new fund: how it fits into the firm’s broader strategy; why it’s unique; and how it plans to realize the ambition of accelerating capital flows into climate-related investments in emerging markets.

I’ve shared McNally’s answers here, and I hope you find them insightful as I did.

Grant Harrison: How does your work on the Climate Finance Partnership (CFP) tie into BlackRock’s broader climate ambitions and strategy?

Rael McNally: The transition to net-zero greenhouse gas emissions by 2050 is going to require the biggest economic transformation we’ve seen in our lifetimes. At BlackRock, we believe that this not only presents significant risks for companies and portfolios that fail to adapt, but it also presents a historic investment opportunity across a variety of sectors, including power, transportation and industry. It’s our job to provide clients with the solutions, tools and data to navigate this transition.

Global power needs are expected to grow significantly between now and 2050, with much of that growth coming from emerging markets, which we expect to represent two-thirds of all global energy demand by 2050. Many of these countries are experiencing rapid population growth, rising incomes and rapid urbanization, which all point to increasing energy needs. They’re trying to grow their overall energy capacity, including renewables. However, there is a significant gap in available funding, which can be a significant barrier to transitioning their economies in line with aspirations for a net-zero world. These markets also tend to have high levels of country and idiosyncratic risks, making it more challenging to find the right investment opportunities. It’s going to require innovative solutions, partnership and significant de-risking to mobilize the investment needed.

There’s a fundamental mismatch today between where climate-related capital is flowing and where it’s most needed, which is emerging markets.

The Climate Finance Partnership is proof that such solutions are possible. It’s been designed to mobilize institutional capital into climate-related sectors in emerging markets, at scale, by bringing together the public and private sectors to both deliver positive environmental impact and capitalize on the return opportunities presented by the transition.

Harrison: Simply put — what makes the CFP stand out, both in terms of its capacity for impact and in its structure and strategy?

McNally: There’s a fundamental mismatch today between where climate-related capital is flowing and where it’s most needed, which is emerging markets. For the reasons I mentioned earlier, emerging markets represent a growing share of global carbon emissions, a massive investment opportunity but only a fraction of global clean energy investment. Climate change is a global problem; without a successful transition to net zero everywhere, climate risk is unmanageable anywhere. As our CEO Larry Fink said, climate change will not respect national borders.

The CFP specifically targets investments in select non-OECD countries in Asia, Latin America and Africa, some of which are among the most vulnerable to the impacts of climate change. The higher risk capital from catalytic investors, including development banks and philanthropic foundations, provides institutional investors with a downside risk buffer against the idiosyncratic risks associated with investing in developing markets. In return for taking on these risks, they can earn a greater share of outperformance at the fund level.

Harrison: The government-owned development banks of France, Germany and Japan have provided catalytic capital for the CFP to spur private investment in emerging markets. Can you share a bit about the genesis of the partnership with these particular institutions and how they’re best equipped as partners to support the fund?

McNally: Our partnership with the governments of France, Germany and Japan reflects our shared belief that more aggressive action is needed to limit global temperature increases to 1.5 degrees Celsius and avoid the worst impacts of climate change. We also understand the essential role that private capital has to play in the net-zero transition in emerging markets given the scale of the investment opportunity and need. It’s a public recognition that governments, investors and civil society — if they continue to work in silos — will not get the job done, and that we need to come together and take bold, innovative steps to successfully achieve a just transition — that is, one that doesn’t leave low-income and other vulnerable communities behind.

Harrison: Larry Fink shared at the Green Horizon Summit during COP26 that, if the first-loss risk was mitigated, there would be “a huge amount of private capital” ready to be put to work. In a couple weeks of jarring numbers at COP26 — some inauspicious, others promising — could you paint a picture as to the scale and potential behind the “huge amount” we may be looking at here?

McNally: I think generally, we’re seeing a significant amount of investor interest in sustainability, particularly in assets that can support the global energy transition. This includes alternative assets as well, given the many attractive characteristics they can offer to investors’ portfolios.  Attracting capital to renewable power and climate infrastructure-focused funds in OECD markets hasn’t been an issue over the last several years, with renewable power being the most active sub-sector in the infrastructure investment space in terms of deal flow and investor interest.

Investments in emerging markets have not historically been a focus for institutional investors for all the reasons we have already talked about, but I believe that we are starting to see that change now. In addition to the CFP, we’ve seen several new initiatives that together are looking to raise billions to invest in the energy transition in low-income countries. We know from conversations with clients that many asset owners want to be a part of the global transition, including in emerging markets, but that capital allocation can’t be divorced from the associated risk, which is why the role of catalytic capital, including from public institutions, is so important.

The last thing I’ll say is that we believe every dollar invested in these strategies and regions has outsized impact. We estimate that each dollar of renewable investment may net $3 of benefits in environmental and social gains. That’s why these are essential investments, they can help avoid costs associated with climate change far greater than the investments themselves.

Harrison: In order to reach global net zero in the time horizon provided by leading climate science, we will need technological breakthroughs beyond our current capacity. What types of climate infrastructure are you most excited about and most focused on for the CFP, and why?

McNally: The CFP will target investments in the climate infrastructure sector, including renewable power generation, energy efficiency in the residential, commercial and industrial sectors, transmission and energy storage solutions, as well as electrified transport and mobility services. Clean infrastructure alternatives, while competitive on a levelized cost of energy basis, can be more capital-intensive on “day one,” making capital structure efficiency an important consideration in a project’s attractiveness. Like the CFP, developing new models to address this issue as well as enhanced tools to manage foreign exchange can make a big difference.

At the end of the day, like any other investment, country-specific fundamentals including economic conditions and regulatory regimes are going to be important considerations in terms of where we invest. Broadly speaking, there are several countries and regions that have the energy demand, government policies and market frameworks that position them well to attract investments.

Capital allocation can’t be divorced from the associated risk, which is why the role of catalytic capital, including from public institutions, is so important.

While it’s not the focus of this particular strategy, at BlackRock we do believe there is a strong need to invest in breakthrough technologies that either do not exist yet or are currently not cost effective enough to deploy at scale. Similar to emerging markets, investors will have to be creative with nontraditional financing models in order to mobilize the capital necessary to find those technological solutions.

Harrison: The partnership achieved $673 million, exceeding your target of $500 million. Quite a successful start. What do you foresee as being the potential biggest challenge for the CFP in its earlier stages?

McNally: There are always going to be challenges associated with investing in emerging markets. Each market presents differences in fundamentals, market structures, regulatory frameworks and other issues that must be accounted for. The “right” strategy will differ in each market. The key is being able to identify the right partners and navigate the international energy market and regulatory regimes to get to the right opportunities.

The scope of opportunities in the emerging markets is immense and diverse, which means working with an asset manager who can both assess opportunities globally and tailor strategies to local fundamentals is going to be key. This is where we feel like we can differentiate ourselves. BlackRock currently manages one of the world’s largest dedicated global renewable power platforms and has, to date, invested $14.5 billion in 34 emerging market economies across our Real Assets platform.

Harrison: BlackRock’s Investment Institute estimates that we need to collectively invest $1 trillion annually into low-carbon projects in developing countries if we are to realize a just transition to a net-zero global economy. What role do you see, or hope to see, the CFP take in closing that gap?

McNally: Obviously, the CFP represents just a small sum of the overall total investment required to help emerging markets adapt their economies to a net-zero world, but it showcases the potential for governments and private investors to come together in a mutually beneficial partnership that can help mobilize institutional capital into climate infrastructure into these regions and deliver both positive impacts in the most vulnerable communities and economic returns for institutional investors.

When the idea of a collaborative public-private vehicle was announced in 2018, hardly anyone was talking about these sorts of public-private partnerships and coming out of COP26, it seems everybody is now willing to see how else we can help advance this important agenda. The important next step is for that talk to become action.