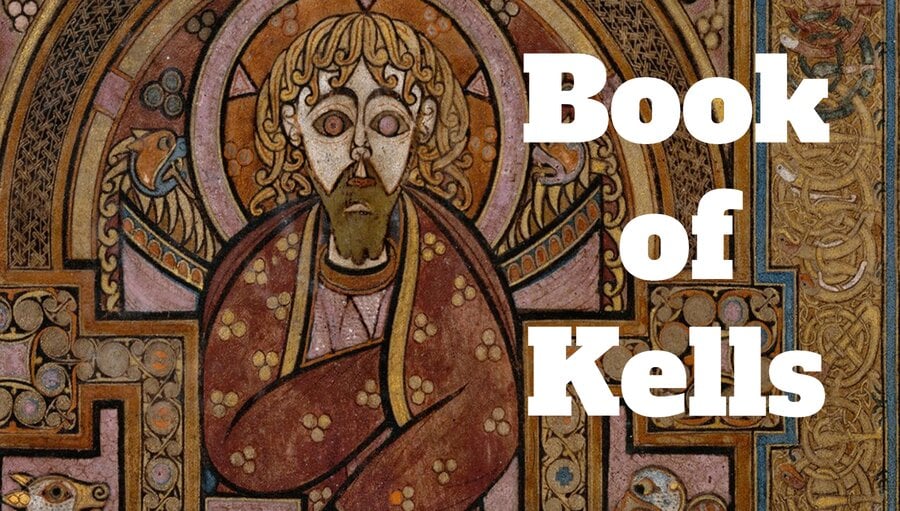 Created about 1,200 years ago, the Book of Kells is considered a masterpiece of medieval art. In one sense it is an ordinary work: a collection of the four Gospels – Matthew, Mark, Luke and John – written in Latin, perhaps the most common book you would find in the Middle Ages. However, it is the intricate detail and vivid imagery that makes the 680 pages of the Book of Kells an extraordinary treasure.

It was probably at Iona, a monastery off the western coast of Scotland, that the Book of Kells was started. Scholars suggest that the monks may have began creating it around the year 800, which perhaps was not the best time to start such a project. It was just a few years earlier that Lindisfarne, another monastery in northern England, was attacked by the Vikings. Soon after the Norse would be raiding throughout the British Isles, often targeting monasteries and churches.

In the year 806, Vikings raided Iona and killed 68 people. The remaining monks fled across the Irish sea and took refuge at the monastery of Kells. It is believed the Book of Kells may have been finished here, and over the next few centuries it was usually kept at the monastery. As time went on, traditions emerged that it was created by the sixth-century Irish saint Columcille, also known as Columba. It would be treated as one of his relics, something to be venerated and considered holy.

Although such a treasure would be treated with special care, it also would have been targeted by men with more nefarious motives. The Annals of Ulster records that in the year 1007:

The Great Gospel of Colum Cille was wickedly stolen by night from the western sacristy in the great stone church of Cenannas. It was the most precious object of the western world on account of the human ornamentation. This Gospel was recovered after two months and twenty nights, its gold having been taken off it and with a sod over it.

The reference to gold might be the case in which the book would have been kept, or perhaps the bindings that kept the pages together. This episode is probably the reason why some pages from the text are missing from the beginning and the end of the manuscript. After that, the book was kept at Kells until the end of the Middle Ages.

The next reference to this manuscript comes from Gerald of Wales. In about the year 1185 he was shown a book at an Irish church, and from his glowing description he was likely talking about the Book of Kells:

This book contains the harmony of the Four Evangelists according to Jerome, where for almost every page there are different designs, distinguished by varied colours. Here you may see the face of majesty, divinely drawn, here the mystic symbols of the Evangelists, each with wings, now six, now four, now two; here the eagle, there the calf, here the man and there the lion, and other forms almost infinite. Look at them superficially with the ordinary glance, and you would think it is an erasure, and not tracery. Fine craftsmanship is all about you, but you might not notice it. Look more keenly at it and you will penetrate to the very shrine of art. You will make out intricacies, so delicate and so subtle, so full of knots and links, with colours so fresh and vivid, that you might say that all this were the work of an angel, and not of a man.

In the seventeenth century, warfare in Ireland reduced the monastery at Kells to ruins, and eventually the manuscript was given to the Trinity College in Dublin. It has remained there since, drawing in curious visitors and being studied by scholars. Much has been learned about the Book of Kells, especially in recent years as scientific tests and imaging reveal new details about the manuscript.

The pages from the Book of Kells are vellum, which is made from calfskin. Researchers have determined that 185 calves were needed to make the original manuscript – and that would require having a herd of 1,200 animals. It is doubtful that a monastery in the early Middle Ages could have owned and managed so many cows, so it is believed that it either took several years to get enough pages, or that they would have acquired them from other monasteries and farms in Ireland.

It was once believed that the rich colours used in the Book of Kells had originated from plants and stones that originated in far off lands like Afghanistan, but scientific imaging has revealed that much of it came from local sources. Chalk, gypsum and indigo were all used to make some of the colours, while the carbon black ink was created by charring wood or bone. There are some colours, like pink, that we still don’t know how they were made.

By looking carefully at the writing, we can identify that at least four scribes were responsible for its text, each of them had their own peculiarities. However, we can also see where they have been somewhat sloppy. There are many instances when letters and whole words were accidentally omitted, and in one case an entire page of written text was repeated on the next page. These kinds of mistakes are often seen in medieval manuscripts, since pieces of vellum were often too expensive to be replaced, and writers did not have computers to spell check their work. However, in the case of the Book of Kells, it perhaps did not matter very much – the book was not something to be read. Instead, it is believed that it would have been displayed in churches or on processions, where it could be shown to crowds of Christians. It was the beautiful artwork within its pages that was meant to be seen and cherished.

It is difficult to describe the illustrations within the Book of Kells because the artists created so much of it on each page. You can see images of people, animals and mythical beasts, abstracts and swirls, Celtic knots and intermingling patterns. The complexity of some of these images is incredible – in one decoration, which is only one-inch square in size, you can see 158 interlacements of white ribbon. How this was done is difficult to understand, as the Book of Kells was created hundreds of years before magnifying glasses were invented.

The larger images in the Book of Kells feature scenes from the Bible, including portraits of Jesus Christ. Many animals are also depicted in its pages, including lions, wolves, snakes, doves, hares and peacocks. They animals, along with many of the other objects drawn in the manuscript, would have had symbolic meanings in the Christian religion of the early Middle Ages.

Today the Book of Kells can be seen at Trinity College Library in Dublin. The manuscript has been divided into four volumes for conservation reasons, and visitors to the library can see two of the volumes, one opened up to page of writing, and another that displays a page of artwork.

This article was first published in Medieval Warfare magazine Issue VI:4 – you can buy that issue here. You can also get new issues of the magazine through our Patreon – click here to learn more.