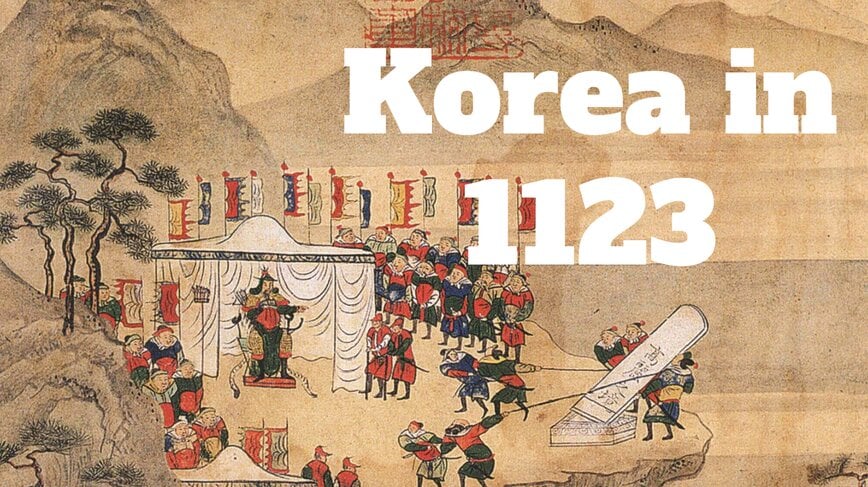 When looking back at a past civilization, sometimes the most interesting sources come from outsiders. Their observations can provide insights and details that are taken for granted by the local inhabitants. Such was the case when a Chinese official visited Korea nine hundred years ago. His report gives us some fascinating observations about that country, including its military.

The Illustrated Account of the Xuanhe Embassy to Koryŏ is an official report written by Xu Jing when he visited the Korean peninsula in 1123. Xu Jing was a calligrapher and government official in the Northern Song Dynasty, which ruled much of what is now eastern China during the years 960 to 1126. The Chinese emperor had dispatched him to visit King Injong, who had only come to the throne of the Koryŏ Dynasty (also spelt Goryeo) a year before. The official reason for the embassy was to offer condolences for the death of Injong’s father; unofficially it was to seek an alliance between the Koreans and the Song against the Jurchen Jin Dynasty, which had emerged in northern China just a few years earlier.

Xu Jing travelled by ship across the Yellow Sea to the Korean capital of Pyongyang (now the present-day capital of North Korea) and spent about a month in the city before returning home. It took him about another year to finish his report, but once he gave it to the emperor it earned him a promotion. Originally the book included his own illustrations; however they were not passed down in later copies.

It is the great attention to detail that made this account so useful. Xu Jing divided his book into forty chapters that described his visit to Korea, the land itself, and many customs of its people. One can find descriptions of what clothes people wore, of what kind of buildings there were in the capital, even of how large a hot water bottle was. The author was also very complimentary of the Korean people, often noting how they were adopting aspects of Chinese culture.

However, when it comes to analysing the military of the Koryŏ Dynasty, Xu Jing is not as impressed. For example, his description of the city of Pyongyang notes that it is not well-defended:

Its walls measure sixty leagues in circumference; the terrain is coiling and twisted and the ground is full of sand and gravel, yet the walls are constructed following this topography. Outside the walls there is no moat, and no woman’s wall was built on top of the walls. Instead extended rooms that look like galleries have been constructed in a row; they look rather like watchtowers. Although military installations have been installed, not much care has been taken in preparing them. Also, because of the shape of the mountains, the walls are not high or strong enough. Especially in the lowest places, they cannot foil the enemy. Should the alarm be sounded, I am convinced they are insufficient as protection.

Xu Jing offers three chapters that primarily deal with the Korean army and its equipment. At times it seems he admires the soldiers who guard the capital city: “Bravery and valor are clearly flourishing here,” he writes. The garrison at Pyongyang is about 30,000 men, and the author provides an overview of how they are arranged:

Roughly, their military organization is as follows. The army has generals, and generals have regiments; the rank and file have their superiors, and foot soldiers are organized in divisions. There are six divisions of the army. These are the Dragon- Tiger Army, the Divine Tiger Army, the Awe-Inspiring Army, the Golden Bird Army, the Thousand Bull Army, and the Restraining Crane Army. They are divided into two divisions, that of the left and that of the right. Furthermore there are three grades, namely, the Superior Army, the Ferocious Army, and the Navy.

He offers even more details about the various divisions, explaining differences in what they wear and which duties they perform. He notes how one unit who guards the king will even shoot birds that fly by too closely, and that another cavalry unit awed him with the way they jumped from saddles to stirrups. However, the author also notes some things that appear to be less complimentary:

Their appearance is very odd. They wear gold-flower-decorated hats that are almost two feet high; brocade clothes and blue robes with a loose waist that covers the legs. The people of this country are of dwarf-like stature, so they especially add high hats and brocade clothing to make their appearances more robust.

Xu Jing’s description of the weapons of the Korean military is even more critical. Overall, he says they are “rough and simple”, adding that this is the reason they have difficulties in fighting the nomadic peoples of northern Asia. Several weapons are given a more detailed explanation, beginning with the bow and arrow:

As for the making of bow and arrows, their appearance is very simple, like the crossbow. The body of the bow reaches a length of five feet. The arrows are not made of bamboo but frequently from willow boughs, which are moreover short and small. When firing the arrows, the archers do not wait till the bowstring is fully drawn, but instead raise their body and send it off. Although the arrows travel very far, they have no power.

His description of swords and halberds is mostly concerned with how they look, but Xu Jing returns to criticism when recounting their shields:

The animal shield is constructed by stretching an animal hide over a wooden frame. It is decorated with a picture of a lion. On top are mounted five daggers that are covered with pheasant tail feathers. The intention is to allow one to defend oneself while at the same time striking others. Moreover, the shield does not allow the adversary to see the sharpness of one’s weapons. However, they look rather like the toy shields children hold for their games. I’m afraid they do not suffice to protect against arrows or stones.

One wonders what Xu Jing might have written had he spent more time in Pyongyang, or had the chance to observe the Korean military in action. Still, the Illustrated Account of the Xuanhe Embassy to Koryŏ proves to be a captivating account of a people living in the twelfth century. The work has been edited and translated by Sem Vermeersch in A Chinese Traveler in Medieval Korea, which was published by the University of Hawai‘i Press in 2016.

This article was first published in Medieval Warfare magazine Issue VII:1 – you can buy that issue here. You can also get new issues of the magazine through our Patreon – click here to learn more.

Top Image: A twelfth-century Korean general and his army, from a Joseon Dynasty painting. Wikimedia Commons