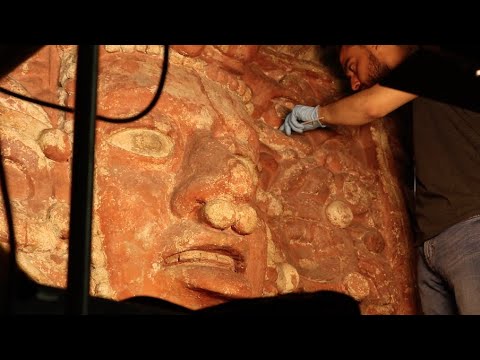 A monumental stucco frieze looted from the Late Classic Maya site of Los Placeres in the jungles of Campeche is the final stage of a four-year restoration that aims to return it to the condition it was in before it was plundered.

Made between 450 and 600 A.D., the frieze features a central mask representing a youthful ruler guarded on each sides by two deified elderly

men, likely representing ancestors, extending to the ruler power and virility. It was vividly painted and much of the polychrome paint remained when it was looted in 1968.

The removal of the Placeres Frieze was one of the most brazen looting and trafficking operations of all time, if not the most. It all started with an art dealer in New York City. A former US Air Force pilot during World War II, the dealer heard about the façade hidden in the jungle and organized a team to loot it. His man on the ground was Lee Moore, an orchid collector who had traveled extensively through Central America pursuing his obsession.

But smuggling a stucco frieze more than 27 feet long and eight feet high that has been attached to a temple for 1500 years is far more complex than smuggling a rare plant. You can’t just hike through the jungle with it in your backpack. For this job, the looters had to clear a stretch of jungle and create an airstrip out of it to even make it possible to transport the massive frieze out of the country.

A looting crew was deployed to the Placeres archaeological site, then completely overtaken by jungle growth. They cleared the façade of plant matter, coated it in Mowilith, a polymer plaster, to keep the surface from disintegrating, then sawed it off the temple with wood saws. We know all of this because the entire operation was photographed in detail. That’s right. They meticulously documented their illegal destruction and theft of an ancient archaeological site.

The looters cut the frieze into 48 pieces and loaded onto a plane bound for Miami. Its eventual destination was New York City where it would be offered for sale to the Metropolitan Museum of Art which was then preparing a major exhibition of pre-Hispanic art. The price tag was $400,000.

The Met wanted to sleep on the idea for a while, so the façade was stored in the basement until the end of 1968 when one of the museum’s curators rejected the offer in horror at the Elgin-like brutality of the frieze’s theft. He contacted the National Museum of Anthropology in Mexico and together they planned a sting to catch the dealer. In a direct confrontation, the directors of both museums demanded the frieze be returned to Mexico. The trafficker still tried to get out of it and here too the brazenness is just off the charts. He actually dared to ask they at least pay him $80,000 to reimburse him for the expenses he incurred building an airfield, brutalizing an ancient monument and illegally removing it from the country. They laughed in his face, of course, and finally he gave up. The frieze was returned to Mexico. Neither the dealer, the orchid collector nor any of the demolition crew were ever punished.

The frieze has been in the National Museum of Anthropology ever since. In 2018, conservators embarked on a comprehensive restoration of the frieze with the goal of returning it to the weathered but still richly colored condition it was in before it was outraged. Over the years it has developed an overall reddish tone and salts have accumulated marring the surface. Experts identified the pigments in the polychrome paint: iron oxides for the reds, carbon black for the pupils, white lime for other details. This information helped conservators target the unwanted elements for removal without damaging the original pigment.

The next phase of restoration aimed to stabilize the frieze which was still mounted to the metal framework that was crafted to support it when it was repatriated in 1969.

“Based on three-dimensional and volumetric calculations, we welded a new structure that supports each fragment with at least four supports”, so that the two tons that the relief weighs rest on a stable frame.

One advantage of the new structure is its mobile character, which will facilitate the maintenance of the piece and will promote the temporary rearrangement of the whole for museum installations.

Already stable, the piece underwent comprehensive cleaning, which required two years of work, between 2020 and 2021, to fully remove the polymer using products created at the CNCPC.

The conservation is being done in full public view in the museum’s Mayan Room. It is expected to be complete by December,