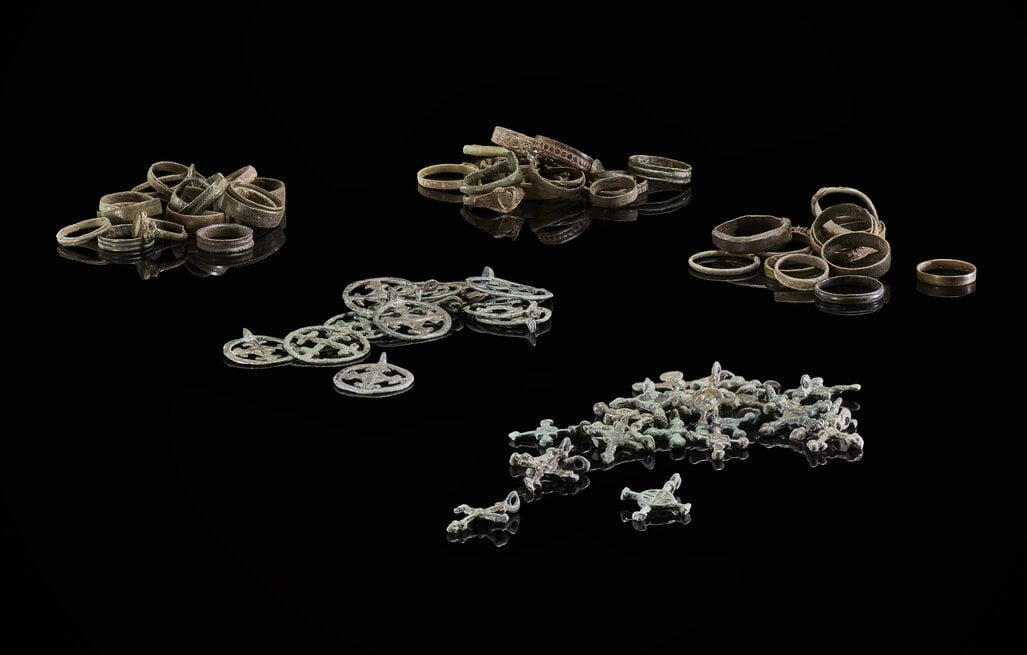 A collection of medieval metalwork that was smuggled from Ukraine has been seized by the British government. It is now on display at the British Museum and will eventually be sent to the National Museum of History of Ukraine in Kyiv.

The collection was shipped from Kyiv to the United Kingdom last eyar in 2021 with the intention of being sold on the internet. Hoewver, the package of 86 objects was seized in transit by UK Border Force last July 2021 and has now been jointly identified by curators from the British Museum and the National Museum in Kyiv.

Among the 86 metal alloy objects, are cross-pendants that date from around the 11th to 14th centuries and are connected with Greek Orthodoxy. There are similar crosses from the district of Kyiv in the National Museum of Ukraine, believed to be local copies of Byzantine prototypes. The disc-pendants are also widespread in eastern Europe, are of similar date and show the impact of Christianity on the local population. The other objects are finger rings, some also early medieval but the majority are later in date.

Metal detecting by private individuals is illegal in most countries around the world, including Ukraine, and uncontrolled treasure hunting at archaeological sites of all periods causes huge damage and loss of historical information. Some of the pieces likely come from a hoard or graves. Many of these objects are sold with misleading provenances to try and conceal the country of origin, and many objects described as ‘Viking’ actually come from early medieval sites in Ukraine.

“In the last years, a number of objects acquired by illicit metal-detectorists in Ukraine were sold to private collectors in Russia, Germany and Britain,” says Dr Fedir Androshchuk, Director General of the National Museum of History of Ukraine. “Some of these artefacts are unique, such as a Viking Age ship’s vane terminal found in Ukraine in 2015 and sold in England in 2016 with a fake provenance. We are facing gigantic transnational looting of Ukrainian heritage which needs to be stopped through common efforts. Today these prevention measures are strengthened by the contribution of the British authorities and British Museum.”

These pieces will be sent to the National Museum of History of Ukraine in Kyiv. Until then, the metalwork will be on display in Room 53 in the British Museum to highlight this important work and collaboration between Britain and Ukraine.

“Culture is fragile yet precious,” notes Dr Hartwig Fischer, Director of The British Museum. “The scale of human displacement and destruction in Ukraine is deeply distressing. The safeguarding and neutrality of culture during conflict is crucial to the future rebuilding of society. We extend our deepest sympathy to our colleagues in museums, and to all the victims of this conflict, whether trapped or displaced, within Ukraine and beyond. We are working together with other organisations to provide aid and support to museums in Ukraine, and you can find a second display celebrating Ukrainian cultural heritage in Room 2.”

Top Image: Medieval metalwork from Ukraine © The Trustees of the British Museum