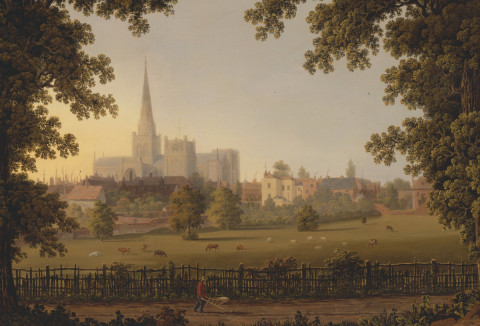 1904 was a big year for H.D.M. Spence, the Dean of Gloucester. It marked the mid-point of his campaign against the composer Edward Elgar, whose work ‘The Dream of Gerontius’ he sought to have banned from his cathedral on account of it containing too many Roman Catholic references (understandable given that Elgar was, in fact, a Roman Catholic). It also saw the publication of his magnum opus The Church of England: A History for the People, four beautiful blue volumes in which Spence traced the history of the English Church. Each twist and turn was recast as leading inexorably to the glorious vision of progressive, rational religion.

Ten years later Spence’s work was out of date. The great technological leaps of humanity had led only to Mons and the religious ramifications of Passchendaele and Ypres were such that religious practices unseen in England since the Reformation – in particular prayer for the dead – were now back in earnest. The world that Spence had seen as dead was back and his cherished vision for the Church looked dated. Nowadays those beautiful blue tomes mostly serve as Zoom backgrounds in rectory studies.

This year we have a new and ambitious foray into the world of Anglican ecclesiastical history. The title of Jeremy Morris’ A People’s Church may or may not be a homage to Spence but undoubtedly he, too, brings the conviction of a particular world view – or Church view – to the task. In this lively and brisk volume, reform is constant, zeal, turbulence, division and ‘major’ or ‘striking’ change are round every corner.

This is the case for all histories of course, but ecclesiastical history even more so. The author – and Dean Spence – deserve our sympathy; such is the brute chaotic energy of the Church of England’s ecclesiology that any popular offering must necessarily be a little like herding cats.

The ordering of things doesn’t help: one moment we are at Worcester House in 1660, making a declaration with Charles II, then we leap to the collapse of the spire of Chichester Cathedral in 1861 before tacking back rapidly to the ecclesiastical machinations of Queen Anne in the early 1710s. I fear that those who are experts in the particular periods covered will not be impressed. English religion before Henry VIII is dealt with in 17 pages, which include such insights as ‘texts played a considerable part in the world of medieval Christianity’.

Past and present intertwine throughout the book. Such is the state of today’s Church of England that Morris’ sentence stating that ‘for many clergy, ministry was a lifelong battle against economic insecurity and successive disappointment’ may as well be in the present rather than the past tense. In one sense that is rather appropriate: the most moving aspect of poking my head into the small Kentish church near my family home is the knowledge that medieval peasants, Georgian squarsons and weeping war widows have all knelt and sought the Divine there too. There is a sort of necessary chronological elision that happens in and around the Church and, where it works in this book, it is very powerful indeed.

However, I fear another sort of time split has occurred here. This is a work already filled with the assumptions of its time, an era which is already past. A kind of Fukuyaman ecclesiology where progress is inevitable pervades. If the 21st century is showing us anything, it is that historical disruptors can send us back round in circles, rather than keeping us on our cherished straight lines. That is as true of the history – and future – of the Church as it is of that of the state.

A People’s Church: A History of the Church of England
Jeremy Morris
Profile 480pp £30
Buy from bookshop.org (affiliate link)

Fergus Butler-Gallie is Curate at Liverpool Parish Church and the author of The Field Guide to the English Clergy (Oneworld, 2018).