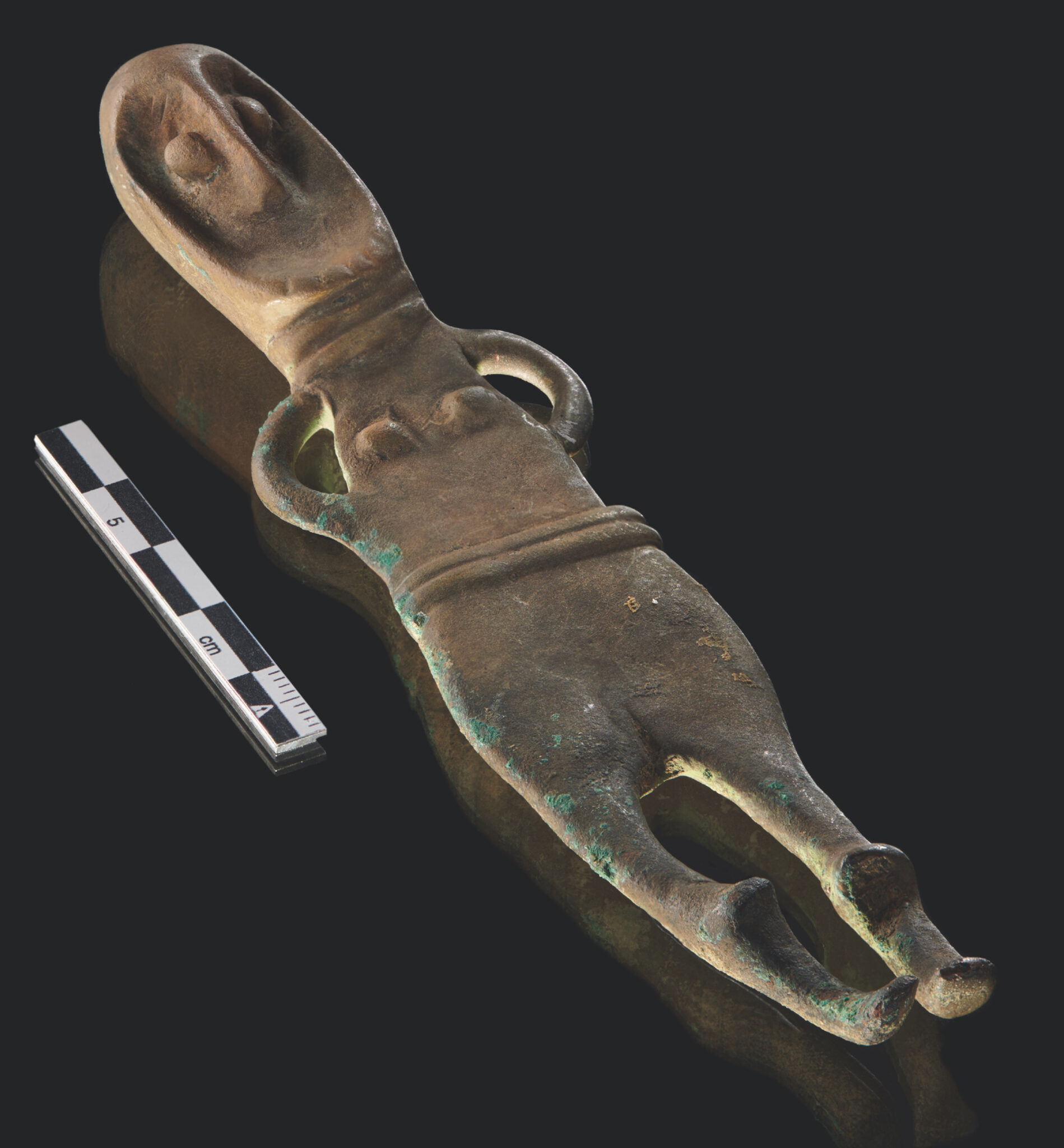 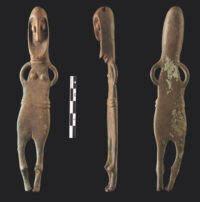 A Bronze Age female figurine discovered in the Tollense River in northern Germany may have been a balance weight, a goddess or both. The figurine was found by Ronald Borgwardt, a truck driver who has been scouting the archaeological and watery depths of the Tollense since the 1990s, on July 20th, 2020. He was snorkeling in the river east of Rostock when he discovered a small bronze figurine in the sediments of the bank. He found a bronze arm ring a few feet away.

Just a hair under six inches tall and weighing 155 grams, the figurine has a flat body, an ovoid shaped head with prominent nose and eyes, looped arms, two bumps for breasts, a shallow vertical cut at the crotch indicating female genitalia and legs with protruding knees. The right leg is strongly bowed, the left straighter. She wears a neck ring and a belt. Typology dates the figurine to the 7th century B.C.

About a dozen similar figurines have been found near the Baltic Sea in Zealand, Scandia and one in northern Germany which was then part of the Nordic Bronze Age culture. The other German figurine was discovered in around 1840 just 20 miles from the most recent find; unfortunately its whereabouts are currently unknown. Most of them have been found near rivers or the Baltic coast. The Tollense is a bit of a double-whammy as it is both a river and direct connection to the Baltic Sea.

Researchers have hypothesized that these statuettes may have had been used as balance weights based on a weight unit of 26 grams, but with such a limited number of examples it seemed unlikely they could have been quotidian tools as there would be more widespread evidence of them on the archaeological record. The 155-gram weight of this example, however, is an almost exact multiple of 26 grams, which may or may not be of significance given that this is the heaviest of the figurines. The second heaviest weighs 133 grams, which is another almost-multiple of 26.

The Tollense river valley is famed for the great number of archaeological materials and remains from a violent clash (battle? massacre?) that took place there in the early 13th century B.C. It’s possible that the figurine was deposited in commemoration of the conflict that had taken place there centuries earlier.

The female figures with looped arms are related to distinctive places of the Later Bronze Age landscape, and the recently discovered specimens from the Tollense valley supports their close connection to communication routes. The significance of the lower Oder area for Later Bronze Age trade is reflected in a concentration of bronze hoards around the island of Usedom, c. 50 km to the east. The wetland context supports the notion of a deposition in a transitional sphere between the real and the underworld. The figures have been considered as evidence for worship (as epitome of a goddess), as evidence for trade (as balance weights), or both (‘goddesses of wealth’). The distribution over a relatively small area speaks rather against an interpretation as a Nordic goddess of this time. 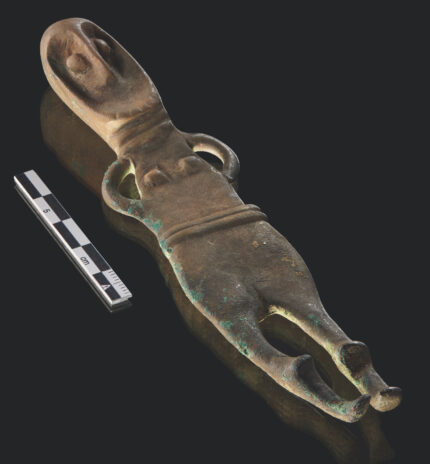