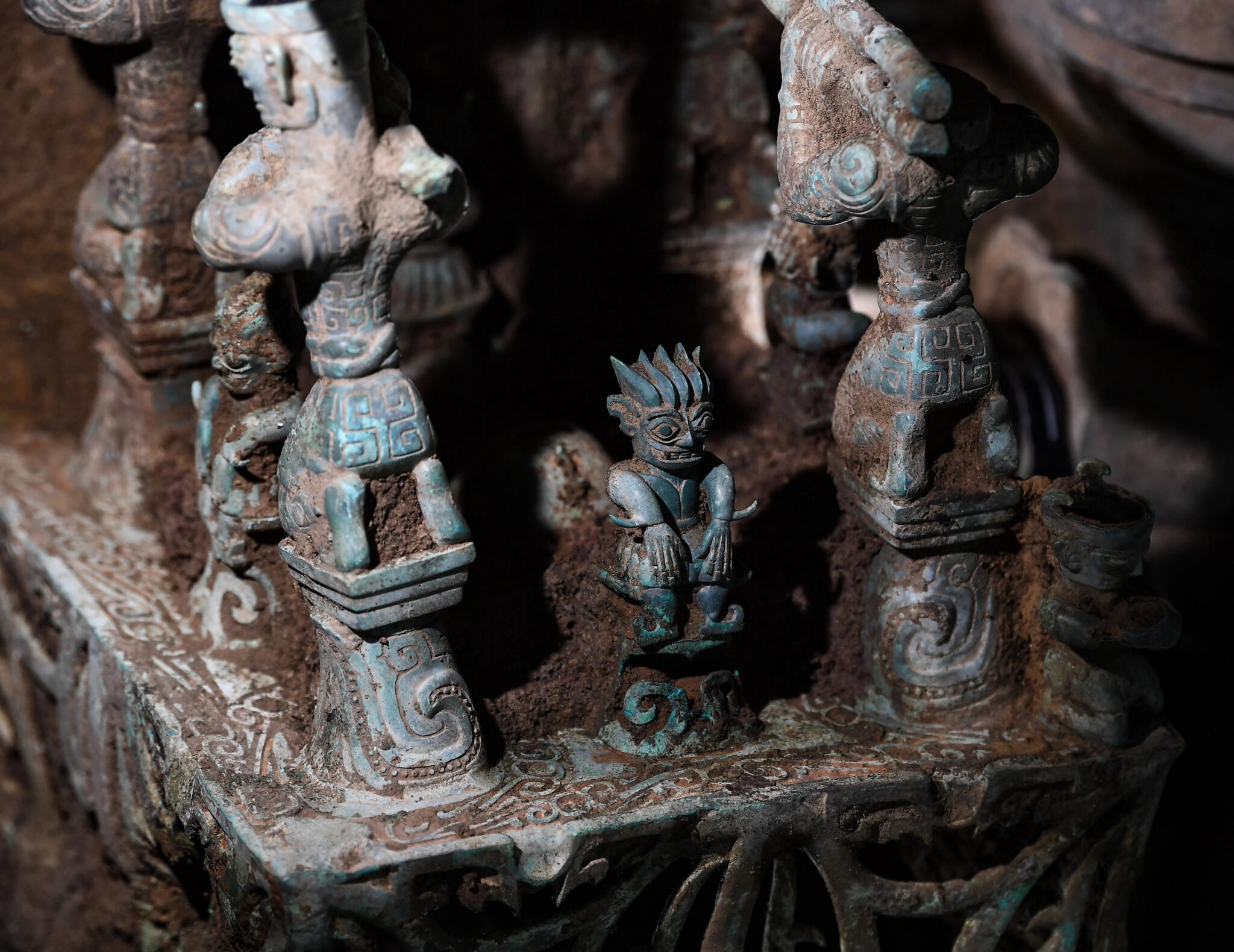 The spectacular hits just keep coming in the excavation of sacrificial pits 7 and 8 at the Sanxingdui Bronze Age archaeological site in Guanghan City, Sichuan Province, southwest China. At least 10 of the artifacts unearthed are one-of-a-kind. Highlights among the most recent finds include a bronze altar, a box containing a large piece of jade and a sculpture five feet high that is the first artifact of its kind ever discovered at the site.

Nearly 13,000 objects made of bronze, gold, jade and ivory have been found thus far since excavation of the six sacrificial pits began in 2020. The vast majority of the artifacts were deliberately broken and bear marks from having been struck and burned before burial. Only 2,400 artifacts of the 13,000 were discovered intact. The archaeological team plans to make copies of the objects and experiment with different destruction and burning approaches to see how the ancient Shu people of the Yangtze River civilization decommissioned the Sanxingdui artifacts for sacrifice 3,100 years ago.

Speaking of which, four of the sacrificial pits (3,4, 7 and 8) have now been conclusively dated to the late Shang Dynasty (1600-1046 B.C.). Carbon-14 analysis of 200 samples taken from the pits returned a tight date range for the burial ages of between 1,131 B.C. and 1,012 B.C. Pits 5 and 6 are older, but still late in the Shang Dynasty. The excavation of pit No. 7 is almost complete. The excavation of pit 8 is about halfway done. The most recent finds come from these two pits. 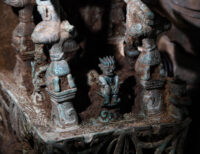 The exquisitely-crafted bronze altar was unearthed this weekend from Pit No. 8. It is approximately three feet high and consists of a platform base with openwork decoration with a top section decorated with bronze mythical creatures in a sacrificial scene. The two pieces were found separately. The upper part was recovered on Saturday, June 11th, and the base emerged the next day.

The bronze five-foot bronze sculpture was also found in Pit No. 8. It was cast in three parts that were then welded together. The central section features an anthropomorphic head with bulging eyes and tusks on a snake body. (Human-headed snake figures are characteristic of the Shu culture.) The figure is positioned head-down, his raised hands holding the lower section: an urn-shaped wine vessel (lei) on a square base. The uppermost section is a zun, a trumpet-shaped drinking vessel, painted vermillion. The complex iconography attests to a mythological world dense with characters and imagery. 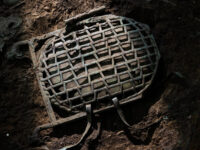 Another unique object was discovered in pit No. 7: a bronze box with tortoise shell-shaped lattice lids hinged together on one side that encased a large piece of green jade. The box has handles in the shape of dragon heads and two or three bronze streamers that look like realistic ties. Microtrace analysis revealed that the box was originally wrapped in silk.

Most of the objects recovered from pit No. 7 are smaller pieces, but no less artfully crafted. One piece found in the northeast corner of the pit this March was a paper-thin folded sheet of bronze. Literally paper-thin; the same thickness as a sheet of A4 paper. Ancient bronze craftsmen in China often cast objects by creating two opposing clay moulds and then pouring the bronze into the gap between them, which is why most of the Sanxingdui bronzes were very thick. The folded bronze paper cannot have been produced using this technology. Archaeologists will have to do a metallurgic analysis of it (and other fragments of thin bronze found in pit 7) to determine how it was made. Right now the preliminary speculation is that it was forged.

Sichuan has begun construction of a new museum in  Guanghan City to house, secure and study these remarkable archaeological materials. It is being built right next to the sacrificial pits and the current museum which is no longer adequate to house the massive collection of objects. The new museum will cover 55,000 square meters, five times the size of the current museum, making it the largest single museum building in southwestern China. It is expected to be completed in October 2023.