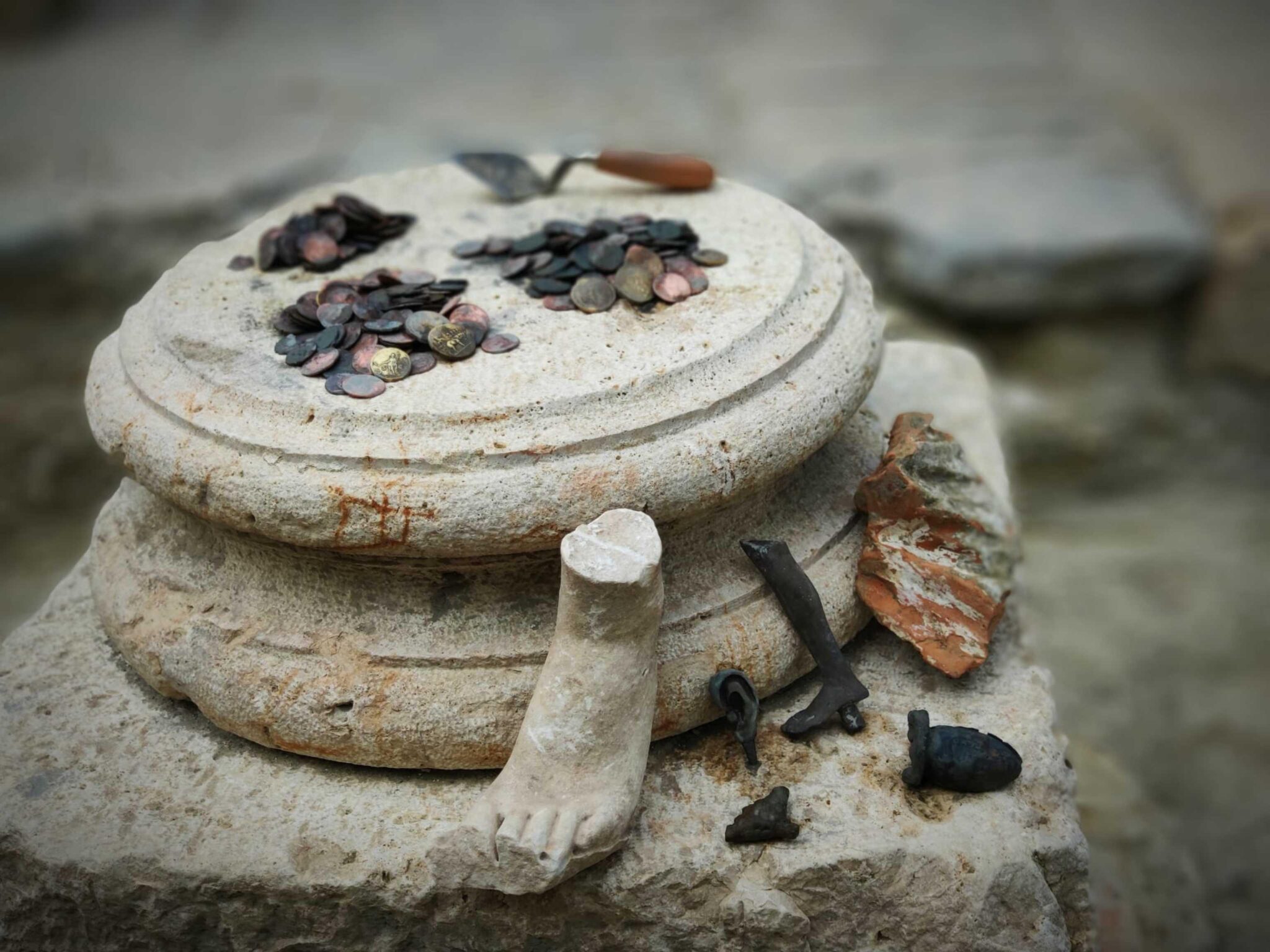 The excavation of the ancient sacred baths at San Casciano dei Bagni near Siena in Tuscany has unearthed a treasury of votive objects including an extremely rare bronze uterus and more than 3,000 freshly minted coins.

Votive offerings made to sacred sites associated with healing were often shaped like the body parts that were afflicted with illness or pain. The

bronze uterus was likely a fertility offering. It dates to the period between the violent demise of the Roman Republic and the establishment of the Roman Empire. Terracotta uteri are relatively frequent finds in Etruscan and Roman temples dedicated to fertility gods, but bronze examples are vanishingly rare.

from the knee down, a bronze penis, a realistic bronze ear and a more stylized, roughly designed ear that is exceptional because of its inscription. It records the name of Aulus Nonnius, the man who dedicated the ear to the sanctuary in the first years of the Roman Empires.

This summer is the sixth season of digs at the baths, and the area under excavation has been enlarged to cover previously unexplored sections of the complex, revealing for the first time the full dimensions of the sanctuary and shedding new light on the many phases of its history.

Evidence was unearthed of a major collapse in the Great Bath area in the late 3rd century. A sinkhole seven feet deep opened in the ground, causing

the surrounding structures — bathing basins, colonnades, buildings — to collapse. This natural disaster was considered a prodigy (an omen heralding an impending calamity) by the Romans, and they quickly moved to appease the disgruntled deities by raising a new altar inside the sinkhole itself. They then built a new, smaller basin over the rubble with a set of stairs leading into the bath.

This season’s excavation reached over a mile away from the core of the ancient sanctuary to unearth the remains of a portico built in the 16th century when the Medici dynasty ruled Tuscany. People seeking healing still sought out the ancient sacred spring, although I’m not sure the Archbishop of Milan, Cardinal Federico Borromeo, would have visited the bath repeatedly in 1600-1 to cure his persistent “cheek ache” had he known he’d was keeping company with votive penises and uteri.

But the real surprise, revealed to ANSA by archaeologist Jacopo Tabolli with a sneak preview, has arrived over the last few weeks with the discovery of the real size of the sanctuary here that belonged to the Etruscans and was renovated by the ancient Romans in the early centuries of the Empire to make it more lavish and monumental.

It was such an exceptional place that the [Rome] mint was ordered to produce a trove of shiny coins made of silver, orichalcum and bronze, perhaps for the emperor’s own offerings to honour the gods tasked with watching over his health and that of the many noble Romans ready to travel to this sacred site.

“It’s a site without equal in Italy or in the ancient Mediterranean,” said Tabolli with visible excitement. […]

“It’s an exceptional discovery because of the size of the area of the sanctuary, which is much larger than we could have imagined, with several holy buildings, altars, pools,” he explained.