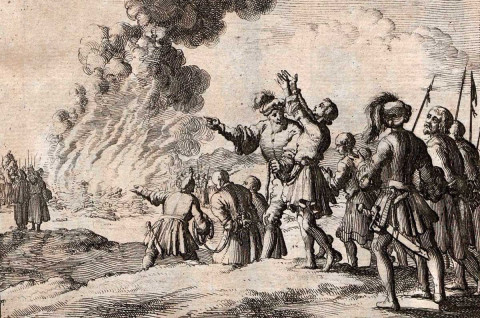 A thousand years ago, in 1022, an extraordinary event took place in the city of Orléans in northern France. A group of about 14 people, led by two canons named Stephen and Lisois, were sentenced to death by burning for the crime of heresy. The king, Robert II, ‘the Pious’, ordered this following an investigation into the alleged heretics witnessed by Queen Constance and a group of bishops. Executions of this nature would become more commonplace in future centuries, but not since the fall of the western Roman Empire had people been executed for heresy in western Europe. Burning alive, it has been suggested, was chosen in this case to represent symbolically the fires of hell into which the heretics would descend.

Robert of Grosseteste, a 13th-century bishop of Lincoln and renowned theologian, defined heresy as ‘an opinion … contrary to holy scripture, publicly avowed and obstinately defended’. In order for there to have been a heresy, there must have been an orthodoxy with the authority to label it. Heretics were one of several groups punished during this period, as western Europe became what has been labelled a ‘persecuting society’. Burning a heretic was not a desirable outcome; a heretic burnt meant a lost opportunity to save their soul. We are told that the heretics at Orléans refused to repent and went willingly to the flames, publicly avowing and defending their faith and claiming the fires would leave them unharmed until the moment their bones were reduced to ash.

We have several accounts of the affair. The three main narratives are found in the writings of Ralph Glaber, Adémar of Chabannes and Paul of Saint-Pére de Chartres. The sources diverge on many of the details, but we can piece together a synthesised narrative. The story typically begins with the heretics being publicly exposed by a nobleman named Aréfast. A member of his household, Heribert, had travelled to Orléans, a prodigious centre of learning. While studying there he met two clerics, Stephen and Lisois, whose wisdom was well known and highly regarded – Stephen was even Queen Constance’s confessor. Stephen and Lisois told Heribert that they could teach him secret wisdom (gnosis), a calling card of heretics. He reported the story to his master, who immediately suspected something aberrant in the clerics’ behaviour. Word spread until the king learned that there were suspected heretics in his realm. He asked Aréfast to infiltrate the group by masquerading as a student to expose their clandestine behaviour. The plan worked and soon after the heretics were before the judges and condemned to a fiery death.

So, what were the charges? Effectively everything. They were accused of denying the grace of holy baptism and the consecration of the body and blood of the Christ, refusing to admit that mortal sins could be forgiven, rejecting the rite of marriage – and refusing to eat meat. During their trial they denied the virgin birth declaring, ‘we were not there, and we cannot believe that to be true’. Contemporary chroniclers, familiar with the works of Augustine of Hippo, recognised that some of these beliefs resembled elements of an ancient heresy known as Manichaeism. Augustine’s Confessions relates his own experience as a youthful member of the Manichaean sect; he also wrote extensively against their doctrines. It was a dualist faith; they believe in two Gods. One good God who rules over the spiritual realm and the soul and an evil God, sometimes seen as the God of the Old Testament, who created the material world. Dualistic belief could explain the abstinence from meat – dualists do not eat animals born through sexual reproduction.

As well as the heretics’ beliefs, medieval writers took an interest in their behaviours. Adémar of Chabannes does not offer details; he euphemistically divulges that ‘they committed sins which it would be sinful to mention’. Paul of Saint-Pére de Chartres has no such reservations. He claims the heretics were meeting with the Devil and engaging in satanic orgies, sometimes with nuns. The babies born from this demonic intercourse were burnt and their ashes revered and used in diabolic rituals. Heretics at Soissons in 1115 were accused of exactly the same behaviour by the idiosyncratic abbot Guibert of Nogent. The account also shares motifs with accusations against early Christians by the Roman authorities, Jews, the Knights Templar, the witches’ Sabbath, and even the satanic panic in the United States of the 1980s. Regardless of what we think of these bizarre accusations, the significance lies in the fact that these ideas could be written by chroniclers and seemingly be credible to their audiences.

Many theories have been put forward to explain this outbreak of heresy. Adémar of Chabannes claims they were converted to Manichaeism by a ‘rustic’ from Périgord in south-eastern France, who carried the magical ‘ashes of dead children’. Ralph Glaber, a rather eccentric Benedictine monk, blamed the heretical views on a woman from Italy who was possessed by the Devil. These differing stories are reflected in the arguments of modern historians; there is still so much disagreement about the event. Political motivations have been suggested. Were these accusations concocted to embarrass the king and queen by a rivalrous count? Or did they stem from a localised escalation in reading Neoplatonic philosophy? Or did the teachings of a Manichaean missionary from the Byzantine empire inspire their beliefs? Some of these assertions seem more plausible than others, but the episode remains a mystery. To echo the words of Stephen and Lisois: ‘We were not there.’ And so the questions remain.

Joshua Rice is a PhD student in Medieval History at Royal Holloway, University of London.