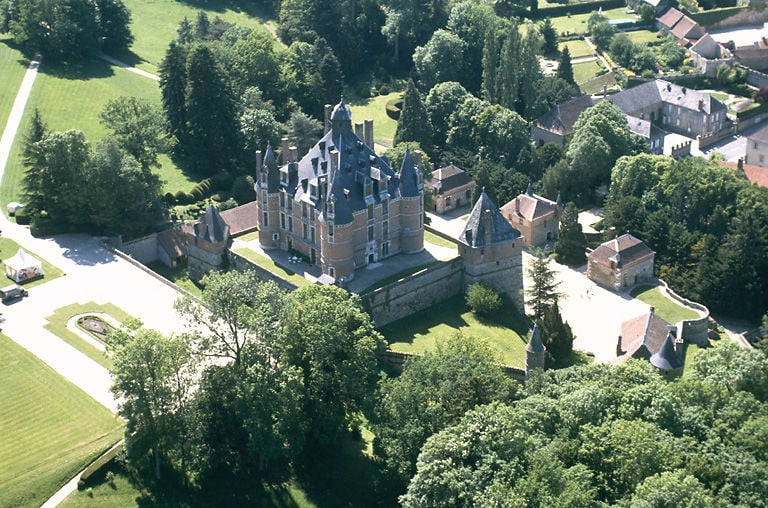 Château de Montmort is a sixteenth-century castle built on the foundations of a medieval fortress. While the earliest mention of a castle at this site goes back to the year 1042, it was rebuilt during the 15th and 16th centuries, being completed in 1577. While changing hands several times during the Middle Ages, the same family has owned the castle since the early 18th century.

The castle has been listed since 2001 as a Monument Historique by the French Ministry of Culture. They describe it as:

The low castle has a decoration of mullioned bays characteristic of the first Renaissance. Next to it, two levelled towers were to receive cannons. Two wings of the lower castle were removed in the 19th century. The upper castle, built later, bears the date of 1577. The plan of the building combines an old reference (a square keep confined by circular towers) with an innovative idea: the cantonment of the castle terrace by towers in the form of a bastion. The ground floor is made up of vaulted rooms on ribbed ribs. In the panelling of the large living room, upstairs, the engraver and theatre decorator Cicéri installed in 1851 painted canvases inspired by the engravings of Sébastien Bourdon. The castle entrance, made up of brick turrets, is also a 19th-century addition. Around the castle is a park and vegetable garden.

The property comes with nearly 30 hectares of land and includes the main castle, barn, stables, pavilion, and an old theatre converted into a function room. Château de Montmort is located in the commune of Montmort-Lucy, about an hour away from Reims and two hours from Paris. The current owners allow for group tours and have a small museum on the site.

The castle is being sold by Patrice Besse, who note:

“A delightful pandemonium of turrets, weathervanes, gables, dormers and chimneys” is how Victor-Hugo once described Montmort castle. The Champagne region is proud to include such a listed, architectural gem that has belonged to several generations of the same family, the members of which have cherished the memory and the magnificence of the premises. This medieval fortress is but waiting for new enthusiastic and committed owners ready to take up the torch.