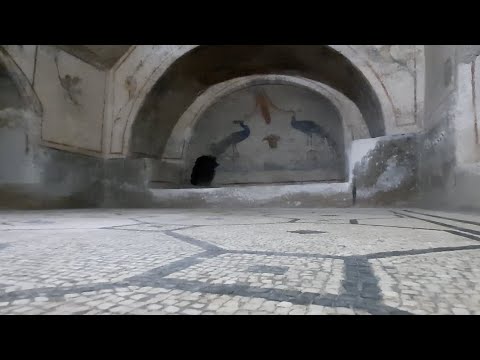 The Mausoleums of Saxa Rubra, two ancient tombs on the northern outskirts of the modern city of Rome, are for the first time open to the public every third Thursday of the month. Surrounded by modern construction along the Via Flaminia, the 2nd century tombs are little known and easily missed in the bewildering density of historical sites in Rome, but they are of great archaeological significance.

The tombs are on the 8th kilometer of the Via Flaminia, the ancient Republican road leading north out of the city. They were both carved out of the red tufa outcroppings Saxa Rubra (meaning “red cave”) was named after.

An inscription identifies the larger of the two tombs as that of Quintus Nasonius Ambrosius, freedman of the Nasonian family, and his wife freedwoman Nasonia Urbica. It was discovered in 1674 during works in preparation for the Jubilee year of 1675. From the moment it was found it was treated in the worst possible way. The history of this tomb is a microcosm of how cultural patrimony can be obliterated by neglect, ignorance and greed. The information panels in the tomb tell the story.

The workers who found the tomb broke through its frescoed ceiling, putting a hole in it and destroying a section of the plaster. The front entrance to the funerary chamber was framed by a temple façade with four pilasters supporting a triangular pediment, also carved out of the same living rock.

Inside they found a rectangular funerary chamber with three niches on its long sides and one at the apex. The walls were divided into two registers separated by a cornice. The bottom register has the niches; the top register alternating lunettes and squares. It was adorned with mosaic floors and elaborate frescoes on every stuccoed surface of the walls, niches and ceiling.

Detailed drawings of the tomb and frescoes by painter and engraver Pietro Santi Bartoli published in 1680 document an absolute riot of richly detailed scenes from mythology (Oedipus and Sphinx, Orpheus charming the animals) and literature (, as well as architectural trompe l’oeil (Corinthian columns, cornices, pediments, friezes), floral garlands, animals, urns, allegorical figures (the four seasons, happiness, and some amazing hunt scenes, including one with a pair of rather odd-looking lions attacking a party of shielded men and another with a pair of oversized leopards attacking the men attempting to entrap them, likely for the arena.

associating themselves by implication with great Augustan-era poet Publius Ovidius Naso, author of the Ars Amatoria and Metamorphoses. There is no actual family connection between Nasonius and Ovid (Naso was a cognomen of the gens Ovidia; the freedman has adopted his former owner’s name (gens Nasonia) as his own).

The discovery was celebrated at the time, but not in any way protected. 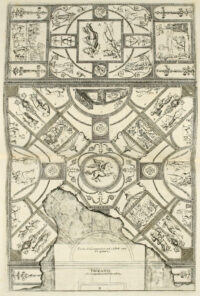 From the time of its discovery through the late 19th century, even after Rome was made capital of a unified Italy in 1870, the frescoes were pried off and sold piecemeal to a variety of willing buyers including the British Museum. The mosaics were torn up. By the turn of the century even the façade had been destroyed. The fraction of frescoes remaining were damaged and faded to the point of being almost unrecognizable as the works Bartoli had so meticulously recorded two centuries before.

The new information panels in the Tomb of the Nasonians recount the whole sad tale and use Bartoli’s drawings to give visitors a glimpse into what the tomb looked like when it was first discovered.

The second tomb is a soothing balm after the Tomb of the Nasonians. An inscribed marble slab at the door dedicates it to a woman named Fadilla from her loving husband. It intact and in beautiful condition when it was discovered in 1923. It’s a smaller space but it is luxuriously appointed with a black-and-white mosaic floor with birds, meanders and other shapes in alternating octagons and squares. The walls and ceilings are fully stuccoed and frescoed with winged Cupids, deities, urns, animals (peacocks, antelopes), outlined in colored paint to create curved and polygonal sections.

Fadilla’s tomb was left unmolested, surviving Fascism, World War II and municiple neglect, which thankfully in this case turned out to be remarkably benign. The contrast between the two tombs is marked. This video’s auto-translated closed captions are terrible, but it’s worth watching even if you can’t understand Italian for the video tour of the two tombs.