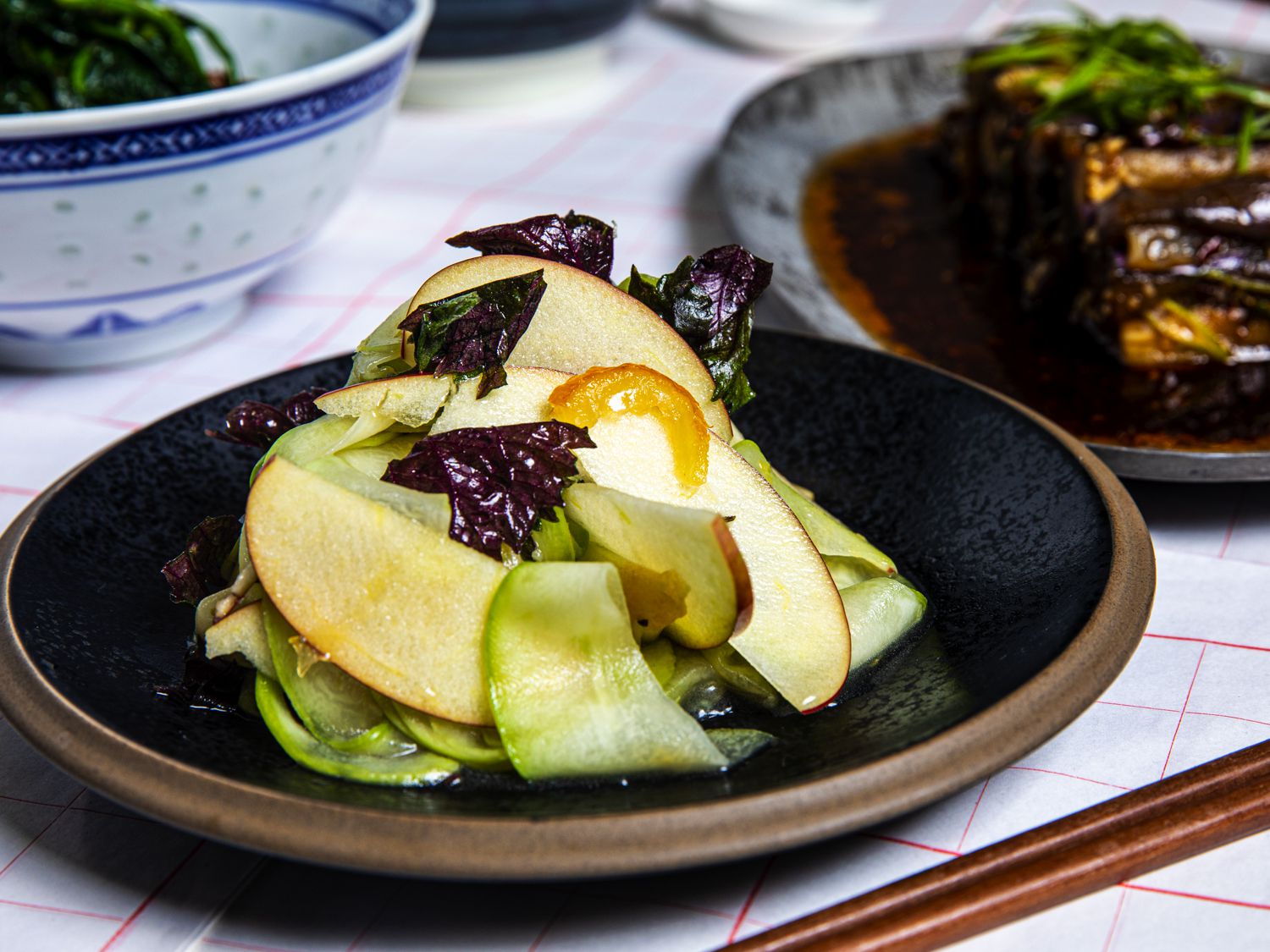 Chayote is known as Buddha’s palm in China, a nod to its shape. Much like in its native Mexico, chayote is usually eaten cooked in China, but when served raw, it has a delightful crunch that recalls jicama, with a mild, fruity sweetness somewhere between an apple and a cucumber.

To fully coax out those characteristics, this recipe pairs chayote with thin slices of apple and a light citrus vinaigrette based on the framework of my “all-purpose” Chinese dressing. Instead of the salty and savory kick of soy sauce that my all-purpose recipe calls for, this one uses Japanese ponzu, while lemon juice stands in for the Chinese black vinegar. Korean honey-citron tea concentrate takes the place of granulated sugar, but I use twice as much of the concentrate, as it’s half as sweet as pure sugar is. I also round out the seasoning oil with some toasted sesame oil for nutty depth. It’s an example of how you can start with that basic recipe and make thoughtful (and even unexpected) changes to any component if you want to create a whole new flavor profile.

Despite all these changes, I stick to my basic ratio (by volume) of three parts salty-savory ingredient, three parts oil, one part acid, and one part sweet.

Of all the recipes I developed to demonstrate the versatility of my all-purpose Chinese-style vinaigrette, this one is certainly the least traditional. Even though I wouldn’t expect to find this in any restaurants or homes back in China, the introduction of citrus to cold dishes isn’t by any means unheard of, and you’ll find it in cucumber, noodle, or hand-pulled chicken dishes.

Using a mandoline or a sharp knife, slice the chayote quarters into the thinnest lengthwise slices you can. In a small bowl, massage the chayote slices with lemon zest, kosher salt, and sugar until evenly coated. Let stand at room temperature for at least 1 hour, or up to 8 hours in the refrigerator. Drain the accumulated liquid and discard.

Using a mandoline or sharp knife, slice the apple quarter into similarly thin lengthwise slices. Transfer to a bowl of lightly salted water (1/2 teaspoon of kosher salt per cup of water) to prevent browning.

When ready to serve, toss chayote, apple slices, and red shiso together. Add dressing 1 tablespoon at a time until sufficiently seasoned, about 4 tablespoons. Serve cold.

Red shiso is my preferred herb in this salad, but basil, parsley, and cilantro would all work well.

Korean honey-citron tea, a syrupy concentrate, can be found at most Korean grocery stores. Regular honey is also a good substitute.

The vinaigrette can be refrigerated in an airtight container for up to 1 week.