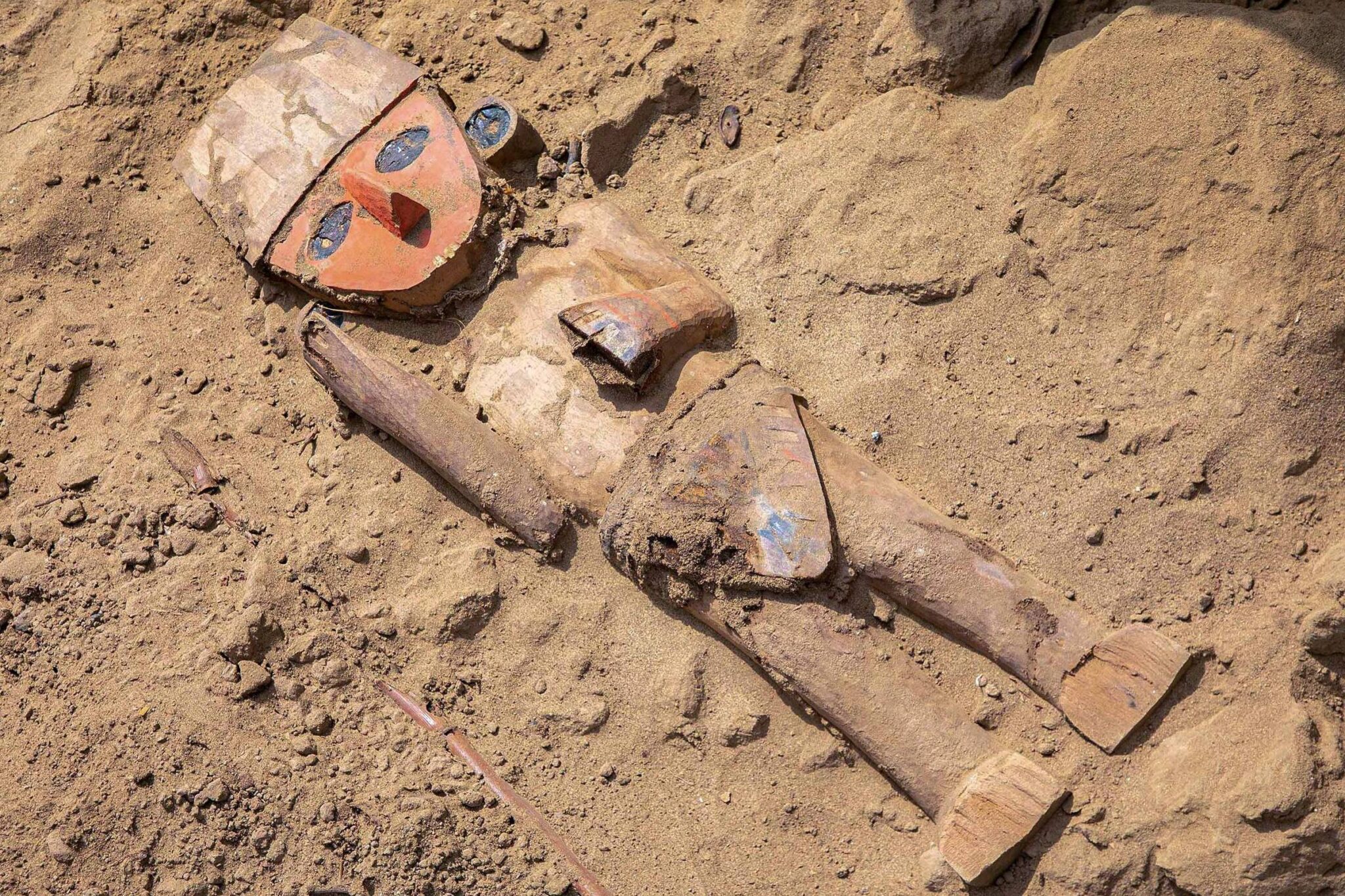 Archaeologists have discovered a wooden sculpture depicting a litter bearer of a ruler of the Chimú culture at the Chan Chan archaeological site on the outskirts of Trujillo, northwestern Peru. The sculpture has not been absolutely dated yet, but the style indicates it is early Chimú, between 850 and 1,470 years old, making it one of the oldest sculptures found at the site. Despite its advanced age, it is in excellent condition, complete with its original bright paint.

The piece was unearthed during conservation work on the Huaca Takaynamo, a pyramidal structure in the north of the ancient complex. The sculpture is 18.5 inches long and just over six inches wide and depicts a male figure with bent arms and straight legs. The face is oval in shape and flat with the exception of a veritable sundial of nose that juts upwards. It is painted red. The eyes are almond-shaped and filled in with a black resin originally used as an adhesive for  mother-of-pearl inlays that are now lost. The curved, scooped ears have a layer of the same black resin.

The right arm is bent upwards at the elbow, cleaving close to the body. The hand is at shoulder height, palm facing the torso. The left arm bends 90 degrees at the elbow with the hand outstretched in front of the torso. The chest, arms and hands were also painted red.

He wears a trapezoidal cap and a triangular skirt. The cap is decorated with seven vertical bands in alternating light and dark colors, with a dark horizontal band across the forehead. The skirt has a dark triangle in the middle and the edge is decorated with rectangular bands similar to the ones on the cap.

Next to the sculpture, archaeologists discovered seeds of nectandra seeds — known to have been used for ritual purposes in pre-Hispanic Peru — that were strung on a thread to wear as a necklace. Underneath the figure was a small black bag stitched with decorative brown and white thread.

[A]rchaeologist Arturo Paredes Núñez, head of the Pecach Research, Conservation and Enhancement Unit, pointed out the characteristics of this finding. “Chimú wood carvings or sculptures are fixed or mobile. The former are documented at the entrance to some walled complexes of Chan Chan, from an uncarved segment that when buried, fixes the carved portion of the element to the ground. The mobile sculpture lacks such an element and has frequently been documented in some huacas,” he said.

The Huaca Takaynamo is north of the main complex of Chan Chan. It is being excavated as part of a wider project of conservation and study to learn more about the peripheral buildings in the ancient city and how to preserve it for eventual display. The litter bearer sculpture is key evidence that the huaca had a ceremonial function.