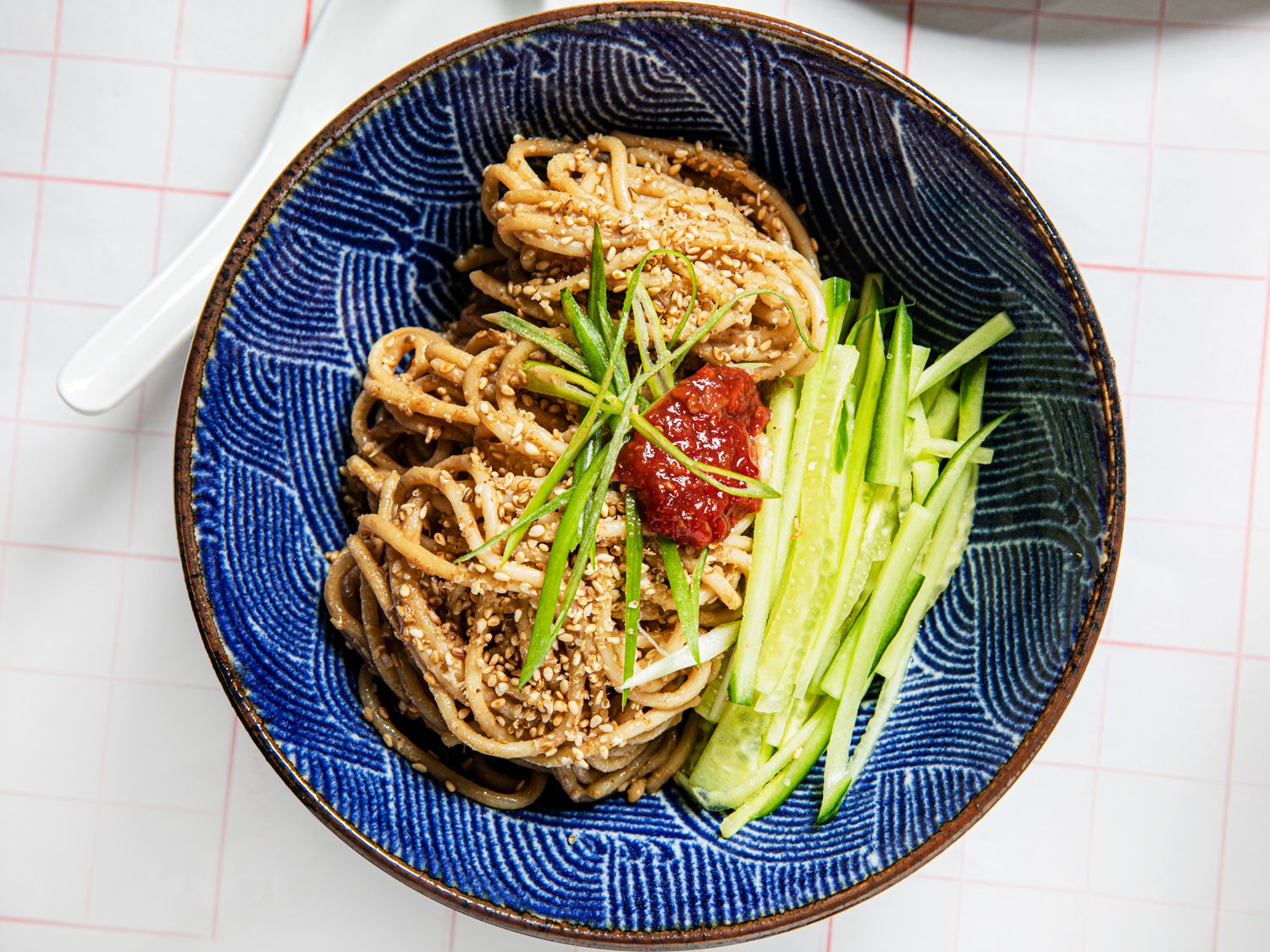 This recipe presents a basic homestyle version of the dish, utilizing my all-purpose Chinese vinaigrette as its base, which I came up with after studying dozens of Chinese cold dishes, or liangcai (涼菜), a wide range of vegetable and meat dishes that are served chilled and dressed. While those recipes vary and the dressings vary, too, I found enough common elements that, with a bit of testing, I was able to come up with a basic version that can be used and adjusted as one wishes, much like an all-purpose salad vinaigrette.

The key ingredients in my all-purpose Chinese dressing are soy sauce, a homemade aromatic oil, vinegar, and sugar, in a ratio by volume of 3:3:1:1, respectively. To alter that basic formula for these sesame noodles, I took the oil component and split it so that it’s one part homemade aromatic oil and two parts toasted sesame oil. Then I whisk in some sesame paste, first dissolved in warm water, to bulk up the sesame flavor and create a creamier, emulsified sauce.

For the noodles, I chose thin wheat noodles, which I boil, drain, toss with oil, and then chill, all without rinsing. Rinsing is a common technique in many cold noodle recipes, as it cools them quickly and, by washing off surface starches, prevents sticking as they sit. By lightly coating mine with oil, I’m able to retain those surface starches while still preventing sticking, which are helpful later when it comes time to dress them—the dressing clings more evenly to the noodles thanks to those surface starches and the thin coating of oil.

The toppings suggested here are traditional and simple—sesame seeds, cucumbers, and scallions for freshness and textural contrast—but feel free to get creative.

In a pot of boiling water, cook noodles until slightly more cooked than al dente (use the time included on the package directions). Drain well, then toss with the neutral oil so the noodles don’t stick to each other. Spread noodles out in a thin layer on a tray and refrigerate until fully chilled, about 1 hour.

While the noodles are chilling, stir the sesame paste with the warm water until smooth. Stir in soy sauce, sesame oil, vinegar, sugar, and seasoning oil until thoroughly combined.

Toss the chilled noodles with about 6 tablespoons (90ml) of the vinaigrette until thoroughly coated. Garnish with toasted sesame seeds, cucumbers,  scallions, and chili garlic sauce (if using), and serve.

Chinese sesame paste, unlike most commercially available tahini, is always made with toasted sesame seeds.

The vinaigrette can be made up to 1 week in advance; keep refrigerated in an airtight container.

The noodles, once tossed in the sauce, will hold up to 1 day in the refrigerator, but any longer and the noodles will lose their textural quality.