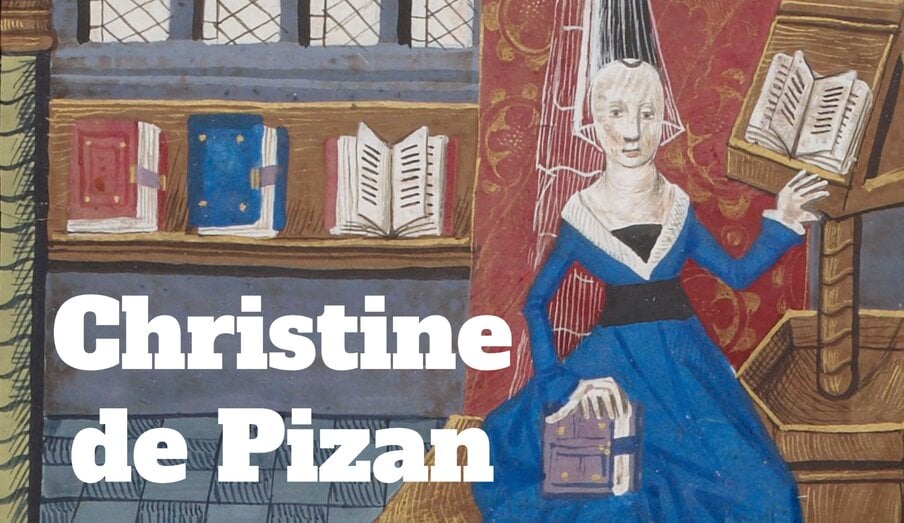 Despite centuries of obscurity, one of the most popular authors of the medieval period is slowly finding her place in the literary canon restored. Said to have been the first professional woman writer, Christine de Pizan’s life and career rivalled that of any of her better-known male counterparts, and believe it or not, she used that popularity to highlight women’s strengths and struggles.

Christine was born in the late fourteenth century, the daughter of a well-known Italian physician, mathematician, and astrologer. Her father was hired to be the court astrologer to King Charles V of France (1338–1380) when Christine was just a toddler, and the family moved to Paris to be together.

Over the objections of her mother, Christine’s father insisted that she be educated. This wasn’t too rare among the nobility, but Christine wasn’t high status, and her mother rightly noted that education wasn’t required to win Christine a suitable husband. It’s possible that being educated did manage to gain Christine a husband who could share in her intellectual enjoyment, however, and at the age of fifteen, she married Étienne du Castel, a notary and the love of her life.

Shortly after the marriage, Christine’s life began to change dramatically. Charles V died, and with him the fortunes of his favourite astrologer took a turn for the worse. Her father was demoted, and soon he became ill and died. The family now depended solely on the income of Étienne, still in favour at court. Time passed, and Christine and Étienne had three children together – two sons and a daughter – but fate was once again unkind. While traveling far afield with the king, Étienne fell ill and died, leaving Christine a widow with three children and her mother to care for. To make matters worse, Étienne had left the family’s finances a mess with debts and loans.

Christine’s options, at this point in her life, were few. The most likely course of action would have been to remarry, but Christine had loved Étienne and was deep in mourning. She could also have found some physical labour – at best, textile work, at worst becoming a laundress or even a prostitute – at which point she would have fallen out of the history books completely. Instead, Christine did something remarkable: she took up her pen.

Her early work was love poems and lyrics, which showed off her understanding of structure and form, but she soon began to gain patronage, and her voice grew both stronger and more political. Modern media would have us believe that this sort of agency would lead a woman to punishment, or even the stake, but Christine’s writings only made her more popular. She was even commissioned by Charles V’s brother to write the late king’s official biography, a huge honour for anyone, but especially for a woman whose ties to fame and to the court were largely of her own making. As her work grew in size and scope, Christine’s views on how women were treated within society became clearer and sharper.

In the thirteenth century, a medieval bestseller called The Romance of the Rose had been written and circulated widely. By Christine’s day, much of the literate populace of France had read it. Started as a fairly mild allegorical poem by Guillaume de Lorris (1200–1240), it was finished by Jean de Meun, an overtly misogynistic writer who gleefully criticized women for failings that were all too often thrown at them in the Middle Ages: women talk too much, they’re fickle, they’re lustful, and they’re irrational, among other things.

For Christine, this book was infuriating, and when she saw it praised, she couldn’t keep silent. Fortunately for history, this led to her writing her most famous work: The Book of the City of Ladies. In Christine’s book, she, as narrator, finds herself reading books by learned men that accuse women of countless faults, and even though she thinks this doesn’t describe the women she knows, she wonders if they must be right after all. At this, three apparitions arrive to set her straight: Lady Reason, Lady Rectitude, and Lady Justice. The ladies tell Christine that these men are certainly not right about women, and that together they will build a City of Ladies, a fortress strong and tall, meant to defend women against these unjust verbal attacks.

Each of the three ladies helps Christine to build a portion of the city by relating stories of strong and amazing women from all areas of medieval learning. There are stories from classical tradition, stories from Biblical tradition, and stories from history. At every turn, Christine uses her lifelong education to question the logic of longstanding arguments against women, highlighting women’s virtues and downplaying their vices. It is an outright challenge to the status quo in terms of the brush with which medieval society tended to paint women all too often.

We should take a moment to note that Christine was not a modern feminist per se in that she didn’t believe all women were equal to all men, and she was certainly not interested in intersectional equality: she privileged Christianity over all other religions, and she didn’t believe in class equality. She did believe, however, that women were unjustly maligned much of the time, and that many – if not most – would be as smart as men if they were given the same education, as she believed they should be.

Despite what we might be led to believe would happen, Christine was not punished for being so outspoken in praising women and criticizing men. In fact, The Book of the City of Ladies was translated and shared all over Europe, rivaling The Romance of the Rose in its popularity. Its adoration even spawned a sequel, The Book of the Three Virtues, in which the three apparitions once again appear to explain to Christine how women should behave in life, giving advice catered to each woman’s own station. And Christine was not finished yet.

After The Book of the City of Ladies, Christine continued to write works that challenged authority and society to be good and moral, backing her arguments up with the most respected sources in medieval Europe: classical authors and the church fathers. She was so popular, that Christine was even invited by Henry IV of England (1367–1413) to join his court, an offer she tactfully declined – a feat in itself given that she considered him a usurper and the leader of the country that was unjustly ravaging her own during the ongoing Hundred Years’ War.

In 1419, Christine disappeared from view as tensions between rival factions in France reached a boiling point in Paris. It’s thought that she retreated to the convent of Poissy, where her daughter was a nun. But in 1429, Christine wrote and published one last poem in praise of one more remarkable woman: Joan of Arc. For Christine, the Maid of Orléans was the hope of France and an inspiration to the entire country. After this, Christine disappeared again. It’s likely that she died fairly soon afterwards, and (we might hope) never saw the fall of her beloved Joan.

Christine’s work was still popular and still circulating after her death, although her authorship was called into question by male printers as time went on, despite the fact that she often referred to herself by name and even had her portrait painted into her manuscripts. Eventually, her writing fell out of fashion altogether, and astonishingly it wasn’t translated into English again until the late twentieth century.

Christine de Pizan’s life is remarkable for the simple fact that she was a professional writer at a time when being a professional writer was extremely rare. Even men who were writing at the time were usually clerics of some description and didn’t need to depend solely on their writing to survive.

The fact that Christine was a woman makes it even more remarkable, and the fact that writing about women’s struggles didn’t make her any less respectable is greater still. (Being respected outside of writing on “women’s issues” once you’ve successfully addressed the topic is a struggle women writers still face today.)

Her writings are a beautiful window into the mind of a medieval woman, addressing as she does the joy of marriage, the heartbreak of widowhood, the stress of being the breadwinner, and the frustrations of being continually underestimated on the basis of gender. They’re also beautiful as works of medieval rhetoric and logic, making clear arguments and supporting them with traditional sources, viewed in a new way. Christine is inspirational, perhaps most of all, in having the courage to write to begin with: to write her convictions and to see them published; to take real and undeniable ownership of her beliefs despite the fact that they went against the grain. For this, she shows more courage than most of the writers alongside whom she is now taking her rightful place as one of the Middle Ages’ most influential figures.

As a writer, professor, TEDx speaker, and podcaster, Danièle has been making the Middle Ages fun, entertaining, and accessible for over a decade. You can learn more about Danièle and her latest work on her website, or follow her on Twitter @5MinMedievalist