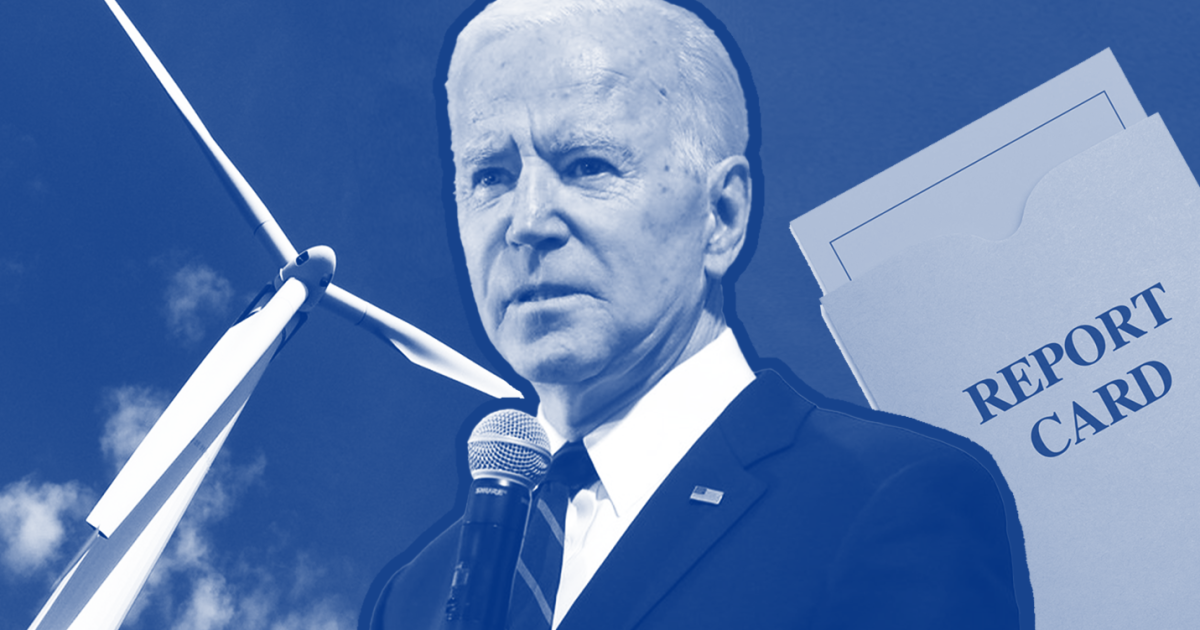 This story was originally published in World Resources Institute Insights.

As President Joe Biden completes his first year in office, many people across the United States are anxious about the resurgent COVID-19 pandemic, concerned about supply chain bottlenecks and related inflation, worried about climate change and frustrated that elected leaders don’t seem to be able to make progress in addressing these challenges.

To be fair, some problems, such as the emergence of new virus variants, are beyond any politician’s control and others, such as climate change, have been decades in the making and can’t be solved overnight. While it is not reasonable to judge Biden’s performance based on whether he has solved these problems, it is reasonable to ask how his response to them measures up against prior hopes and expectations.

We should also recognize that although the president has tremendous powers, much of Biden’s agenda requires Congress to cooperate, and securing that cooperation has proven to be a challenge.

While the president had success working with members of both parties to pass the Infrastructure Investment and Jobs Act (or Bipartisan Infrastructure Law), the larger and more consequential Build Back Better Act remains stalled. Without Republican support, every Senate Democrat (and nearly every House Democrat) must sign off on the final bill for it to become law.

While the president had success working with members of both parties to pass the Infrastructure Investment and Jobs Act (or Bipartisan Infrastructure Law), the larger and more consequential Build Back Better Act remains stalled.

When it comes to climate change, shortly after last year’s election I laid out three principles and 10 priorities I hoped the Biden administration would adopt in their response to the climate crisis. Here I take stock of what the administration has accomplished, what is still a work in progress, and where it has fallen short to date.

At the level of principles, I give the Biden administration full marks. What about specific measures?

1. Commit to cut total greenhouse gas emissions by at least 50 percent by 2030: Achieved.

In April, Biden set a new national goal to reduce emissions by 50-52 percent from 2005 levels by 2030 and formalized that in an updated U.S. nationally determined contribution (NDC, or climate plan) under the Paris Agreement.

2. Pass a major climate-smart economic stimulus package to build back better from COVID-19: Work in progress.

More than $500 billion worth of clean energy tax credits, electric vehicle rebates and other climate-smart investments are pending in the Build Back Better Act (BBBA), which cleared the House in November but remains stalled in the Senate.

3. Require all new passenger vehicles sold after 2035 to produce zero emissions: On track.

The tax credits for clean electricity generation and transmission investments in the House-passed version of the BBBA would make progress toward these goals, but would not be sufficient to get to a 100 percent carbon-free electricity system. The Federal Energy Regulatory Commission should reform electricity markets to ensure that they fairly accommodate clean electricity and the EPA should set strong power plant emissions standards (although their ultimate fate in the courts is uncertain).

The EPA has issued regulations to implement the phase-down of hydrofluorocarbons as directed by the American Innovation and Manufacturing Act, enacted as part of the fiscal year 2021 appropriations bill. The EPA has also proposed regulations to reduce methane emissions from the oil and gas industry and Biden helped launch a global methane pledge at the Glasgow Climate Summit, or COP26, under which more than 100 countries have committed to cut their total methane emissions at least 30 percent by 2030.

6. Set appliance and equipment standards to replace fossil fuels with electricity whenever feasible: Off track.

In 2019, Berkeley, California became the first city to ban the use of natural gas in new buildings to fight climate change. Since then, dozens of urban centers have followed suit, including major cities such as San Jose and New York. At the state level, California’s most recent building code update requires new buildings to be wired for all-electric operation and uses heat pumps as the energy efficiency benchmark for heating but does not ban new gas hookups.

In her 2022 State of the State policy book, New York Gov. Kathy Hochul proposed that all new buildings be required to have zero on-site emissions no later than 2027. The federal government, however, has only taken limited steps to encourage building electrification to date and is behind schedule in updating key appliance standards.

The House-passed BBBA includes a $3.5 billion program to encourage home electrification, including rebates for heat pump water and space heaters that would encourage, but not require, a shift away from natural gas appliances. The administration needs to do everything within its power to promote building electrification by setting timely and strong efficiency and emissions standards.

The Bipartisan Infrastructure Law includes major investments in carbon capture and sequestration and in clean hydrogen production and use that could go a long way in demonstrating methods to decarbonize these emissions-intensive industrial subsectors.

In addition, Biden’s executive order on catalyzing America’s clean energy economy through federal sustainability directs federal agencies to buy low-carbon building materials and achieve net-zero federal procurement by 2045, while the First Movers Coalition, launched at COP26, enlists major companies in promoting decarbonization of cement, steel and chemicals by committing to purchase low-carbon supplies of these materials when they become available, even if they initially come at a price premium. These are important steps and the administration should follow through by establishing mandatory low-carbon product standards.

The Bipartisan Infrastructure Law includes significant investments in wildfire risk reduction and ecosystem restoration to protect and promote natural carbon removal as well as in direct air capture by establishing four regional hubs. The Department of Energy has already issued a thoughtful Request for Information to solicit input on how best to implement its large new carbon removal program. The House-passed BBBA would significantly enhance these efforts by establishing a Civilian Climate Corps, which would support natural carbon removal, and by increasing the Section 45Q tax credits for sequestering carbon dioxide captured directly from air.

Biden rejoined the Paris Agreement his first day in office and held the Leaders Summit on Climate in April. While other countries remain wary about the durability of the Biden administration’s climate policies and the administration and Congress need to take further action on international climate finance, U.S. engagement was clearly in evidence at COP26.

As well as helping to ensure completion of the Paris Rulebook during the climate summit, the U.S. also helped launch the Global Methane Pledge, the Glasgow Leaders’ Declaration on Forests and Land Use and the First Movers Coalition on sustainable supply chains. The world is watching closely how the country will proceed. To remain on track, the U.S. will need to enact the climate provisions of the BBBA to achieve its 2030 target and follow through on significantly increasing its international climate finance.

The Bipartisan Infrastructure Law and the House-passed BBBA include important investments in climate-smart infrastructure and incentives to deploy climate solutions at scale, but no climate policy is complete without a mechanism to ensure that emissions reduction targets are met through enforceable emissions caps and/or an emissions fee that ratchets up if other measures fall short. Sen. Sheldon Whitehouse (D-Rhode Island) and others have been tireless in urging that a carbon fee be added to the BBBA, but Biden has done little to support the idea. Meanwhile, the fate of the methane emissions fee included in the House-passed BBBA remains uncertain in the Senate.

Biden has done more to tackle the climate crisis in his first year in office than any previous American president. He gets full credit for making climate change a centerpiece of his economic prosperity agenda, focusing on the largest sources of greenhouse gas emissions and enlisting all parts of the government in the effort. He has set an ambitious target for slashing U.S. domestic emissions and made headway on reestablishing international climate leadership.

Efforts to transition to electric vehicles, curb emissions of methane and HFCs, and scale up carbon removal are on track. If we were grading on a curve, Biden would earn an A for effort. But the objective nature of the climate crisis allows no such leniency. Evaluated against the harsh climate reality we face, Biden’s accomplishments thus far must be judged incomplete.