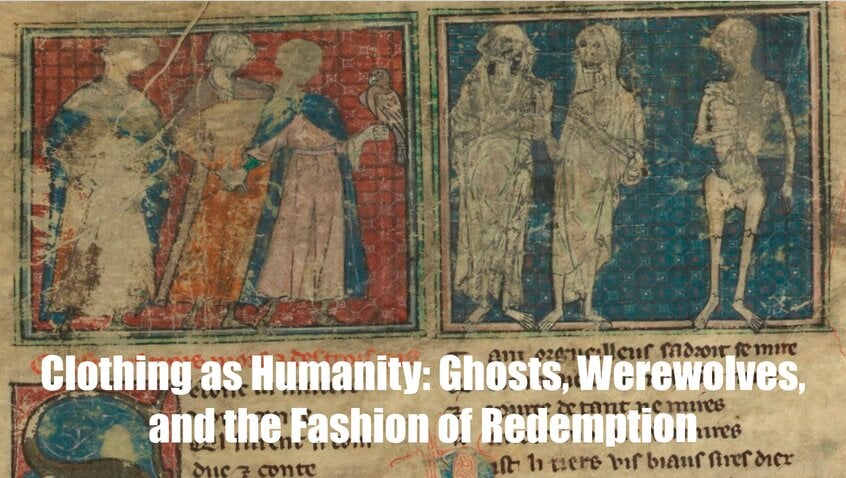 Clothing can reflect many traits in a narrative — class, region, family, religion — and at times, the very nature and origin of the character wearing them. Through a range of medieval sources, otherworldly and supernatural beings are described through dress, identified or questioned by it, and sometimes, it is pivotal to the story. The rich clothing of the fairy women in Marie de France’s lai of Lanval, or the gem-studded garb of the fairy court visited by Walter Map’s King Herla, demonstrate the wealth of otherworldly beings, but the role played by dress was often a more integral, and more complex, aspect of the characters’ identities.

This role is evident in ghost stories, first and foremost, as clothing could be used to recognise the ghost in question, but also to indicate their status in the afterlife. Jean-Claude Schmitt, in Ghosts in the Middle Ages, identifies several categories of ghosts featured in medieval illustrations, whose dress sense varies from nothing at all, to a burial shroud, to the clothes that they wore in life. In some tales, such as the Chronicle of Iria’s account of the return of a Spanish king to his widow, garments have a twofold purpose: the queen retains a piece of fur given to her by the ghost to prove that the encounter did occur. The fur in question had been given by the king to a poor priest, in order to redeem his own soul, and that in the vision, he appeared wearing white — a colour often associated with salvation. In comparing the piece of supernatural fur to the real one, the queen and the priests find that a piece of equal size is missing from the original, and are therefore convinced that the encounter was genuine. The transfer of clothing between life and death was significant, and the varying customs surrounding burial of socks and shoes — whether placed on the feet of the departed, given to the funeral bell-ringer as payment for service, or given away in life and retrieved in the afterlife — is indicative of this trait.

In a similar vein, the Book of Visions by Otloh of St Emmeram, an eleventh-century monk who worked in Germany, provides an example of the posthumous reversal of the social station held in life, demonstrated through clothing. The knight’s armour, a hallmark of his position, is the thing used to torment him after his death. However, it is not used to identify him — the brothers who perceive the ghost must be told that it is their departed father. In Andrew Joynes’s translation of this encounter, the father’s plea stirs his sons to redress the wrong he has done, and afterwards, he appears to them “in a different garb.” This means that he is able to leave in peace — his altered clothing being an outward demonstration of the redemption of his soul.

Clothing can also be used to reclaim humanity, or to challenge it. In the Lai of Bisclavret, Marie de France’s gripping werewolf story, clothing is key to the transformation from wolf to human. The hero (referred to as Bisclavret, though it is ambiguous whether this means it is his own name or a generic Breton term for a werewolf), a knight who turns into a werewolf every few days, can always return to human form by retrieving his clothes from the place where he hides them to transform. When asked by his wife, the knight explains his situation — if he were to lose his clothes, he would be forced to stay in wolf form. This leads to his downfall for a time, after his wife steals his clothes, and eventually marries another knight. What is remarkable in the story is the unchanged behaviour of the werewolf, who continues to defer to the king, harms no one, and behaves in a courtly fashion even in the form of a wolf. When the clothing is returned at last, he refuses to transform in front of the king, wanting to dress in privacy.

Bisclavret’s use of clothing is linked to physical, but not mental, transformation. The knight cannot turn back into human form without his clothes, but he can still be well-mannered and well-liked. As in the ghost stories referred to above, the knight’s own clothing is key to the narrative, but instead of indicating spiritual redemption, it is more of a physical rescue from his werewolf state. Though few details are given on the clothing itself, it is still a mark of his identity, as there is no indication that another person’s garb would have had the same effect.

While these examples rely on clothing as an indicator of humanity, it could also be used to refer to supernatural worlds and characters. This is often by way of lavish descriptions of clothing worked by seemingly superhuman skills, as Sarah-Grace Heller’s article “Obscure Lands and Obscured Hands: Fairy Embroidery and Ambiguous Vocabulary” points out. The association of fairies with elegant clothing that is present in Lanval, for example, meant that fairy embroidery could mean a supernatural origin — or it could be shorthand for an exotic, luxurious garment.

That clothing could be used to redeem a restless spirit, to return the humanity of the individual, or to show supernatural origins, allows it a flexibility within narratives of the supernatural, and an often layered symbolism. If dress made for an effective status symbol, it could also demonstrate the futility of that status, or be used to torment the spirit after death. Though rich embroidery may be used to identify an otherworldly character, clothing could also be used as a means of reclaiming some aspect of identity that had been threatened.

Karin Murray-Bergquist is an actor, writer, and scholar currently working on a PhD in folklore at Memorial University of Newfoundland. Please visit her website Practical Fantasists