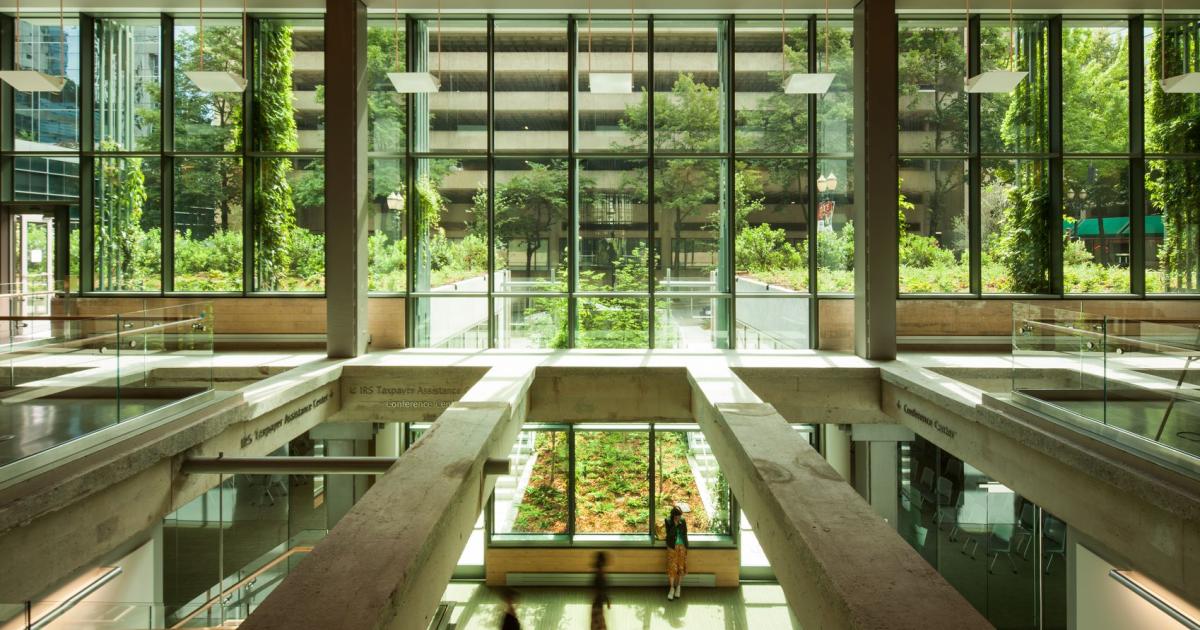 For more than 20 years, the building design and construction industry has worked to reduce the amount of energy buildings use — this has been our primary contribution to combating global warming.

Buildings generate nearly 40 percent of the world’s carbon emissions, so this is unquestionably an important effort, and through a combination of passive design strategies (building siting, shading devices) and improved engineering options for greater water and electrical efficiency, the industry has achieved big improvements. Our new projects, on average, have much smaller carbon footprints than they used to.

But buildings actually generate carbon emissions in two ways, and improvements in operational efficiency only address one part of the issue — maybe not even the most important part.

Operational carbon emissions come from energy use — either direct emissions from natural gas equipment and appliances or from electricity used by the building that was generated from fossil fuel sources (drawn from a power plant that runs on coal or natural gas).

Embodied carbon emissions, on the other hand, come from the building’s construction. This includes the carbon released via extraction, fabrication and transportation of building materials, as well as the emissions directly associated with the process of building construction (fossil fuel-powered equipment and project electricity).

Our industry must turn its attention to embodied carbon, without losing our focus on operational carbon. Why? Two reasons:

So, if embodied carbon has always been a big — but overlooked — component in the overall carbon emissions impact of buildings, and if operational emissions are starting to be reduced through improvements to our power grid, then our industry urgently needs to turn our focus to the carbon impacts of construction.

First, we must minimize each and every project’s embodied carbon emissions through thoughtful construction practices and careful material selection.

Second, instead of defaulting to new construction, we must strive to repurpose and update buildings that already exist. Studies indicate that reusing a building avoids 50-75 percent of the embodied carbon emissions that an identical new building would generate.

The $139 million EGWW modernization project was part of the American Recovery and Reinvestment Act of 2009, which included a $5.5 billion commitment to building a more sustainable national infrastructure to reduce energy and water consumption and increase the federal government’s use of clean and renewable sources of energy.

The LEED Platinum project preserved the existing structure and optimized the building’s sustainability with a variety of structures and features including a 25,000-square-foot canopy, 170,000-gallon rainwater collection tank, 13,000-square-feet of photovoltaics, a dedicated outside air system that provides 100 percent fresh air and recovers exhaust air heat and façade shading devices to minimize heat gain during summer months. The design by SERA and Cutler Anderson Architects transformed the building into a modern office environment for federal agencies.

The retrospective EGWW study compared the embodied carbon emissions of the actual scenario of building reuse to constructing a comparable new building. (The only difference between the modernized EGWW and the theoretical new building was an increased floor-to-floor height to better represent high-performance building norms for 2010.) The findings showed that by reusing the concrete foundations and superstructure of the original EGWW building, 53 percent of the new construction embodied carbon emissions were avoided.

Studies indicate that reusing a building avoids 50-75% of the embodied carbon emissions that an identical new building would generate.

EGWW is just one mid-century building in one city, yet there are thousands of such buildings in hundreds of cities across the United States. Consider this national commercial building data from the Energy Information Administration’s Commercial Buildings Energy Consumption Survey Database:

Taken together, these statistics suggest that by retrofitting about 350,000 large-scale modern-era buildings, the U.S. could reduce its greenhouse gas emissions by about 10 percent, with each retrofit avoiding 50-75 percent embodied carbon emissions over building replacement scenarios. Our industry and our policymakers need to recognize this opportunity and drive the market towards increasing all kinds of energy-efficient building reuse in the coming decade.

As the industry continues to develop a better understanding of energy consumption in buildings, the need for efforts in the built environment to reduce embodied carbon emissions should be prioritized.

Reusing and adapting a building for future use has the potential to avoid 50 percent or more of the embodied carbon emissions of an identical new building. While it is still important to continue looking for ways to reduce both the embodied and operational carbon emissions of new buildings, building adaptation should be thoroughly considered before demolishing a building for a new construction project.