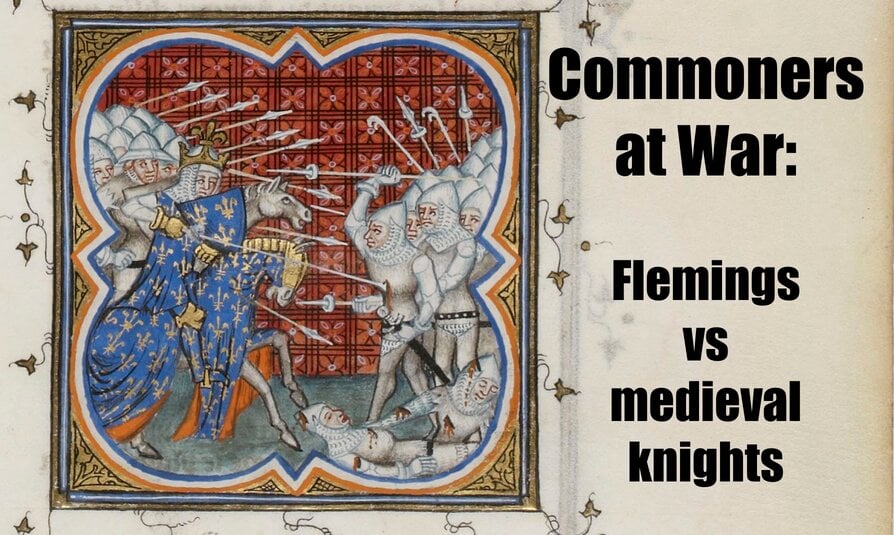 It is easy enough to think that the warriors of the Middle Ages were all knights or nobles or at least gentlemen. After all, the aristocratic warriors tell us that that was the case. When the rare knight with a philosophic bent wrote about his place in Christian society, he talked about the Order of Chivalry, the members of which were the only legitimate wielders of force.

But if that knight went to a war camp, a castle or a fortified town, he would find himself surrounded by commoners who made up a large part of any military force. And he wouldn’t be surprised. By no means were commoners restricted to cooking, taking care of horses and other such support work; they often took part in strictly military operations, using all sorts of weapons. Some of the best examples of the role of commoner soldiers come from the chronicler Jean Froissart in his detailed accounts of the Hundred Years War and other campaigns. Among the most interesting campaigns for those of us who want to understand commoners at war are the lengthy accounts of the often militant Flemings (the people of Flanders) in a whole range of conflicts from politically-motivated street riots to rebellion against their counts and the King of France, their ultimate overlords. Fleming militancy is not unique, but constitutes a useful case study of commoners at war.

Flanders where the population was divided between Dutch-speakers and French-speakers, enjoyed a strategic and economically advantageous position in northern Europe, with easy access to England, northern France and the Rhine valley. When times were good, said Froissart, especially when the town’s leaders got along well with the Count of Flanders “the country was so fertile, and everything in such abundance, that it was marvelous to see; and the inhabitants of the principal towns lived in very grand state.”

But of course Flanders did not always enjoy peace. Commoners often resented the taxes imposed on them by the Count, taxes that nobles did not pay. Those elite enjoyed that privilege because they had the duty of fighting.  But when they didn’t do their duty, resentment of the nobility grew until some incident sparked a revolt of the commoners. Whatever the cause of these revolts they could be very dangerous to the “men-at-arms” who supposedly dominated the battlefield.

This was demonstrated to the nobility at the Battle of the Golden Spurs (also called the Battle of Courtrai) in 1302 when an army of Flemings, fighting mainly on foot against a French army occupying Flanders, won a stunning victory. It was a slaughter. The French, whose well-armed, well-mounted cavalry seemed fated to win a great victory, were destroyed by men who were mostly infantry:  The Annals of Ghent reported:

the art of war, the flower of knighthood,  [=French chivalry] with horses and chargers of the finest, fell before weavers, fullers and the common folk and foot soldiers of Flanders, although they were strong, manly, well armed, courageous and under expert leaders.

The Flemings collected 500 pairs of golden spurs from dead French knights, thus giving the battle its name. Their tactics of fighting on foot were imitated in wars throughout Western Europe for more than a century: even noble “men-at arms” dismounted and formed tight formations on foot, to counter the infantry of the opposing armies.

Other conflicts contributed to the military readiness of Flanders. Flanders, one of the centers of the lucrative wool trade, was often caught between England and France, and the common Flemings found themselves with a need to defend themselves and opportunities to enrich themselves. They were further involved in the quarrels of the Counts of Flanders, who naturally expected their subjects to contribute to his military projects, one way or another.

Early Flemish soldiers were minimally armed lacking the full plate armor and well-trained horses of the nobles; they substituted determination and ingenuity. At the Battle of the Golden Spurs the Flemings used relatively cheap weapons: long pikes and short, heavy spears, goedendags, that could kill an armored man when used like a club. Put pikes and goedendags together, wielded by motivated soldiers trained to hold formation, and victory might seem possible.

See also: Could a Peasant defeat a Knight in Battle?

Later, in the 1350s, the situation had evolved. When the rebellious Parisian population surrendered their gear to the king’s officers, the quality of these items impressed and even frightened noble observers. At the same time the “Mallotins” (a different rebel group) carried cudgels or ladders. The Mallotin equipment may sound desperately low-tech but many sources show that a good supply of ladders was necessary if one was attacking a fortification or a town wall.

Of course we can’t forget that there was also the high-tech infantry weapon that was increasingly common: the crossbow, which was used by anyone who could afford it. Add to this some expert use of siege weapons, which by the mid-fourteenth century would also include cannons.

For example, the citizens of Ghent led a siege of the city of Oudenarde. One chronicler describes the weapons they made use of:

(The army of Ghent) with much labour placed on the hill of Oudenarde a prodigiously great engine, twenty feet wide and forty long, which they called a Mutton, to cast heavy stones and beams of timber into the town, and crush everything they should fall on. They had also, the more to alarm the garrison, fired a bombard of a very great size, which was fifty feet in length, and shot stones of an immense weight. When they fired off this bombard, it might be heard five leagues off in the day-time, and ten at night. The report of it was so loud, that it seemed as if all the devils in hell had broken loose. The Ghent men made likewise another engine, which they pointed against the town, to cast large bars of hot copper. With such machines, as cannons, bombards, sows and muttons, did the Ghent army labour to annoy the garrison of Oudenarde.

Here we see projectile weapons – a type of high-tech – made by commoners and used by commoners.

Flemish cities, largely dependent on overseas trade, were also able to produce ships which might be initially used for commerce but could be converted to military purposes – something that the English, for instance, did not find easy to replicate.

Thus the impressive ability of the Flemings to wage war on the Count of Flanders and his allies/subjects, not just a manifestation of effective military power; the largest cities had an industrial capability that made it possible for them to punch above their weight.

One factor that enabled the commoner Flemings to fight with such determination was that communities often settled their disputes with violence. The same applied to conflicts within communities. Froissart attributed these internal conflicts to the Devil and envy. There was certainly enough envy. The civil war of 1382 began with Jan Yoens, a rich (but common!) citizen of Ghent who had influence in the Count’s administration and was also a leading member of the pilot’s guild, eliminating rivals through assassination.  After one crucial event, a conflict with Bruges over the water supply, Jan Yoens gained power by appealing to his core constituencies and the Ghentish traditions of popular resistence:

“Gentlemen (he said at a public meeting), if you wish to risk this business, and put an end to it, you must renew an ancient custom that formerly subsisted in the town of Ghent: I mean, you must first put on white hoods, and choose a leader, to whom every one may look, and rally on his signal.”

This harangue was eagerly listened to, and they all cried out, “We will have it so, we will have it so! Now let us put on white hoods.” White hoods were directly made, and given out to those among them who loved war better than peace, and had nothing to lose. Jan Yoens was elected chief of the White Hoods. He very willingly accepted of this office, to revenge himself on his enemies, to embroil the towns of Ghent and Bruges with each other, and with the Count their lord. He was ordered, as their chief, to march against the pioneers and diggers from Bruges, and had with him two hundred such people as preferred rioting to quiet.

Jan Yoens used his guild connections, his control of the White Hoods, and his ability to motivate large crowds to change the politics of Flanders. As Froissart noted, he relied on violence – street riots, the murder of political opponents in Ghent, the subjugation of other Flemish cities and a major war against Bruges and the Count of Flanders – to make himself a strongman.  Although Jan Yoens died early on in the conflict, Philip Van Artevelde, a gang leader and son of an earlier revolutionary leader, succeeded him, using much the same tactics.  The commons of Ghent fought hard but by 1385 had to give up the fight.

The way personal and family competition led to wider wars is of interest. Participation in local or guild politics in Flanders and in other communities eventually led to dictatorship. It’s not for lack of opponents to one-man rule, whether by a count or an eloquent leader representing “the people.” The lack of cooperation among people who supposedly shared the same principles allowed one-man rule to be restored or established.

Steven Muhlberger, before his retirement from Nipissing University, studied and taught Late Antiquity, the history of democracy, Islamic history, and chivalry. His most recent scholarly works include The Chronicle of the Good Duke Louis II Bourbon published by Freelance Academy Press.

The Hundred Years War I: Trial by Battle (University of Pennsylvania Press, 1999)