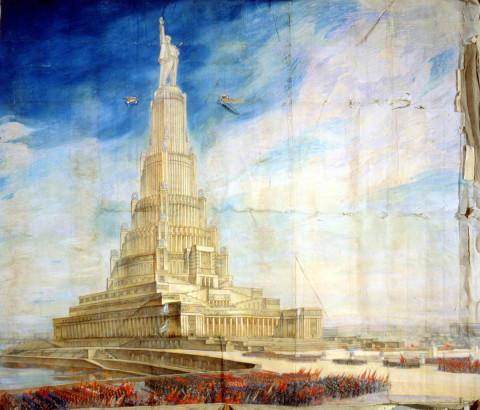 The fame of Albert Speer, the minor classical architect who rose to become the industrial boss of the Third Reich, has brought about a notion that each dictator has an architect on hand to translate his dreams into built reality. Actually, Hitler was fairly exceptional in his obsession with architecture, though not in his banal and kitsch taste. That’s not to say dictators didn’t put pressure on their architects – it is likely Stalin personally demanded spires on the seven skyscrapers that were built in Moscow after the war, for instance. What made this different from, say, the Canadian prime minister Mackenzie King’s insistence on placing mansard roofs on all the office buildings of Ottawa, was that King didn’t have the power of life or death over his designers. Stalin did.

Boris Iofan wasn’t ‘Stalin’s Architect’ in the sense that Speer was Hitler’s, merely one of many designers adapting to the demands, whims and chicanery of the Stalinist state. Yet, in some ways, his story is unique. Early Soviet Moscow was an exciting place for architecture, with competing Constructivists and Classicists creating strange, wonderful and usually small-scale buildings. What made Iofan different was that he was a ‘court architect’, specifically favoured by the state.

Iofan was from an artistic Jewish family in the Ukrainian port of Odesa and was educated in St Petersburg. After the revolution he emigrated to Rome where he married an Italian aristocrat; they both joined the Communist Party of Italy. In 1924, as a Russophone Communist in Rome, he met the Soviet premier, Alexei Rykov, and escorted him around the city’s baroque treasures. Their friendship, plus Iofan’s party card, meant he had preferential treatment after returning home to the new Soviet Russia.

As a Soviet architect, he dabbled in Constructivism and Palladianism, before settling on an American and Italian influenced modern Classicism – big, grand, symmetrical and rather pompous buildings, with minimal decoration. Iofan was not prolific; he is best known for three projects, one of which remained unbuilt. The House of Government, an immense multifunctional edifice of 1928, housing high-level bureaucrats opposite the Kremlin; the temporary Soviet Pavilion at the 1937 Paris Exposition, with Vera Mukhina’s famous ‘Worker and Kolkhoz Woman’ at its top; and the Palace of the Soviets, a doomed 1932 project to build the world’s tallest building in Moscow.

Competitions were often effectively rigged for Iofan. It was unlikely that he would have won many of them on sheer talent. He was not a great architect – unlike the Constructivist Moisei Ginzburg, the classicist Ivan Fomin or the promiscuous Alexey Shchusev, who could flit with equal skill between Byzantine and Modernist styles according to what his patron demanded. Iofan’s work seldom managed to transcend its state-set brief. The House of Government is a mess because he was given the impossible task of fitting an incredibly complex programme into a symmetrical monument that wouldn’t scare the horses; it is a dour, dark building. Sudjic is a specialist on how ‘architects perform the survival dance with the rich, the powerful and the famous’, the subject of his 2006 book The Edifice Complex. He successfully makes a case for Iofan as an adept at this dance, but fails to do so for his abilities as a designer.

However, the book is gently moving on the man caught in the middle of all this. Iofan never rebelled – he wouldn’t have survived if he did – and he never had the gall to tell his bosses that the Palace of the Soviets he was coerced into making ever taller and grander was ridiculous. But, unlike many of his colleagues, he never denounced anybody and managed to preserve at least a modicum of personal integrity. Iofan also became a minor victim of Stalin’s antisemitic purge of ‘cosmopolitans’ in the early 1950s, which saw him dropped from the project to build the high-rise Moscow State University. And yet his buildings remained dreary. Other designers favoured by Stalin, such as Mikhail Posokhin, switched after his death from the lumbering classicism the despot had favoured towards confident and original forms of modernism; Iofan’s late buildings are inconsequential prefabricated blocks. In old age, he lived in the past, sketching an imaginary re-siting of his Paris Pavilion in central Moscow.

In 2009, as Sudjic points out, a ‘clumsy rebuilding’ of that pavilion was built in Moscow. He suggests Iofan would have been baffled by it, but I suspect he’d seen – and built – much worse.