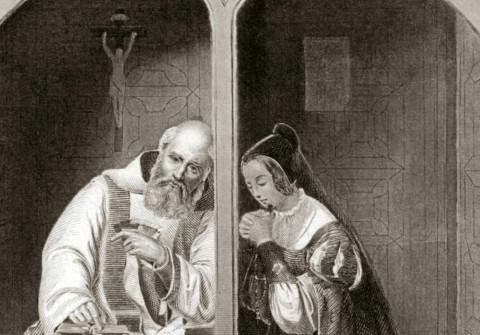 In a confessional box in Tuscany in 1639, a priest named Francesco Mei took a confetto and put in his mouth. He then he told 17-year-old Brigida Gorini to take it in her own mouth and suck it, before forcing her hand on his penis. Gorini reported his abuse anywhere between ten and 12 times during the sacrament of the confession. The same man was reported to have abused 12-year-old Elisabetta Rossi, kissing and touching her throat during her confession. In Malta in 1653 Maria Taboni reported that, the previous Christmas, she had gone to the house of her confessor, Don Giorgio Gauci, looking for his sister Grazia whose help she needed to mend some clothes. She instead found Gauci, who let her in, shut the door and assaulted her. ‘He raped me and then said I should have married his nephew Lorenzo to cover this up.’

These women trusted their confessors with their souls, in a world in which religion and the authority of the Church were all-encompassing. Such abuse might prompt guilt and shame, the fear that their families would blame them, or that the parish would find out and accuse them of enticing pious men into sin. However, despite what we might expect from such religious and provincial environments, what followed was very different. The women felt it was important to speak out against their abusers and did so.

The Catholic Church has a well documented history of silencing victims of sexual abuse, both male and female. However, in 17th-century Italy and Malta, the Inquisitorial authorities acted promptly in seeking justice for female victims. As an independent body that answered directly to the Papal Seat in Rome, the Inquisition had jurisdiction over both the secular (in the world) and regular (convent and monastery) clergy. They took the denunciations seriously and demanded that the culprits be questioned and punished; they also went as far as to inquire over the victims’ wellbeing. When the Maltese Paolica reported abuse, the Inquisitor earnestly wished her well (ogni vero bene).

In agreeing to a trial, the Inquisition wanted to set an example, but also to prevent heresy, as such allegations could mean the religious men had misinterpreted the sacrament of the confession. The Catholic Church continually legislated on the matter to prevent sin and abuse being committed. However, it was never clear on how to interpret wrongdoings before or after ‘the penance’ – a loophole of which priests were well aware. Francesco Mei denied all the accusations, saying he would have never done anything during the confession: if anything had happened, it would have been outside the sacrament, so he did not sin.

It is also possible that, in some instances, local priests or friars took advantage of the nature of the allegations and their authority in the matter to settle past disputes over promotions, money or misconduct. Helping solicited women was an opportunity to avenge or expel unwanted colleagues or superiors. In 1658, in Malta, Don Simone Azzoppardi was accused of sexual assault by a woman related to Don Matteo Abela, a man with whom he had had a fight previously over the keys of the tabernacolo, hinting therefore that the allegations were merely slander for revenge. Similarly, Don Palmerino Capi, parish priest of Burmla, near Valletta, dismissed accusations by 22-year-old Catherina Abela that he had wanted to ‘play with her’ as pure forgery. Following an election in the priory, he had made enemies who were, the priest alleged, now using Catherina to get back at him.

Women were encouraged to come forward on the religious ground that they would be complicit in the heresy of the perpetrator. Further to this was the duty to report a sinner so as to allow him to repent and ‘go to Heaven’. But it is clear that they were also motivated to see men forced to account for their misdeeds.

The women took an active role in defending themselves, both by opening up to their families and speaking up to the authorities. In 1656, in Burmla, hundreds of names filled up almost two registers of what seems to have been a local rebellion against Don Palmerino Capi. The women’s cross-examinations repeatedly describe him fondling them, harassing them, wanting to ‘know them carnally’ during the confession. In this case, as in many others, the support of mothers, husbands or fathers was central. In 1736 Anna Pulcino’s parents reported that their daughter had been abused (copula carnale) by a man they had deemed to be a friend, the 36-year-old priest Michelangelo Mamo. On Shrove Tuesday, 17 March 1654, outside Don Giorgio Gauci’s house, marks of manure and human droppings were found on the wall. There was also a skull – possibly of a donkey – hanging from the door with a black sword marked on it. Everyone believed it was a message left by Maria Taboni’s father.

Following the trials, the abusers faced different fates; some spent years in jail and many were exiled, or prevented from practising their profession. The punishments were at the discretion of the Inquisitor and differed widely. Some could be as lenient as prayers – Michelangelo Mamo only had to say the seven penitential psalms and Francesco Saverio possibly escaped with some spiritual exercises. Public outcry made a prison conviction more likely. In 1659 Don Simone was given seven years in prison, but even such confinement could be turned into house arrest if the culprit was considered in frail health or simply old. In 1656 Don Palmerino Capi’s galley sentence was changed because he had been crippled by a ‘serious illness’. At times, discretion was used to avoid public ‘embarrassments’; nevertheless, records show that the Inquisition took action to stop the abusers having contact with their victims again, moving some perpetrators to other parishes and even supervising their behaviour.

In January 1639 Francesco Mei abjured. Nevertheless, he was still excommunicated, fined 200 scudi and jailed in Buggiano Castle, a sentence that was possibly later turned into house arrest. Brigida, Elisabetta and their families were vocal and demanded that he be punished. Maria Taboni saw Don Gauci charged with rape and imprisoned.

Giada Pizzoni is an Associate Fellow in early modern history at the University of Exeter.