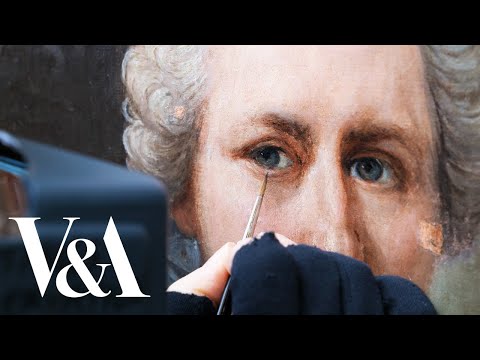 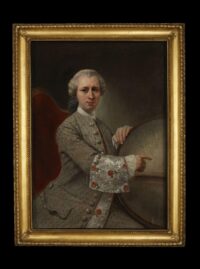 The Victoria & Albert Museum has recently made a rare double acquisition of an 18th century portrait and the exact silk waistcoat the sitter is wearing in the painting. Both objects are currently undergoing conservation.

The portrait of Edward Curtis of Mardyke House, Bristol, was painted by Italian portraitist Marco Benefial in 1750. Edward Curtis bought the waistcoat as part of a suit with matching coat while he was on the Continent. His father had made a fortune in the sugar trade, and Edward, then 24 years old, traveled through Europe on the Grand Tour as expected of every wealth young Englishman of the time. Buying elegant new clothes in France was on the de rigeur checklist for Grand Tourists. Getting your portrait done in Rome wearing your new French silk brocade suit was too. 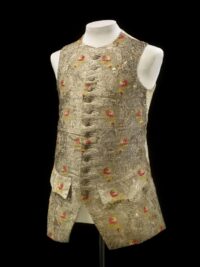 The waistcoat was made of luxurious brocaded Gros de Tours taffeta embellished three different types of metal threads (two silver and one gold) woven into a stylized shell pattern. Roses with two leaves are brocaded in red, yellow, purple and green colored silk threads on the front and back. The weaving technique employed is typical of the master weavers of Lyon in France, but the quality of the execution in this waistcoat is a step down from that, suggesting it was woven in Lyon style elsewhere, perhaps in Tours. Nineteen of the original buttons, silver metal star-shaped ornaments over a wooden core, have survived. The original matching jacket, alas, has not.

When conservators began their work, the waistcoat in the portrait no longer matched the color of the waistcoat itself. Discolored varnish had yellowed the light silver background of the vest, and centuries of dust had darkened the surface. The waistcoat was actually in better superficial condition that the portrait. It has been altered over time, with panels added to the back to make room for a Mr. Curtis’ middle aged spread, but the brocaded silk has been lovingly tended to and required very little conservatorial intervention.