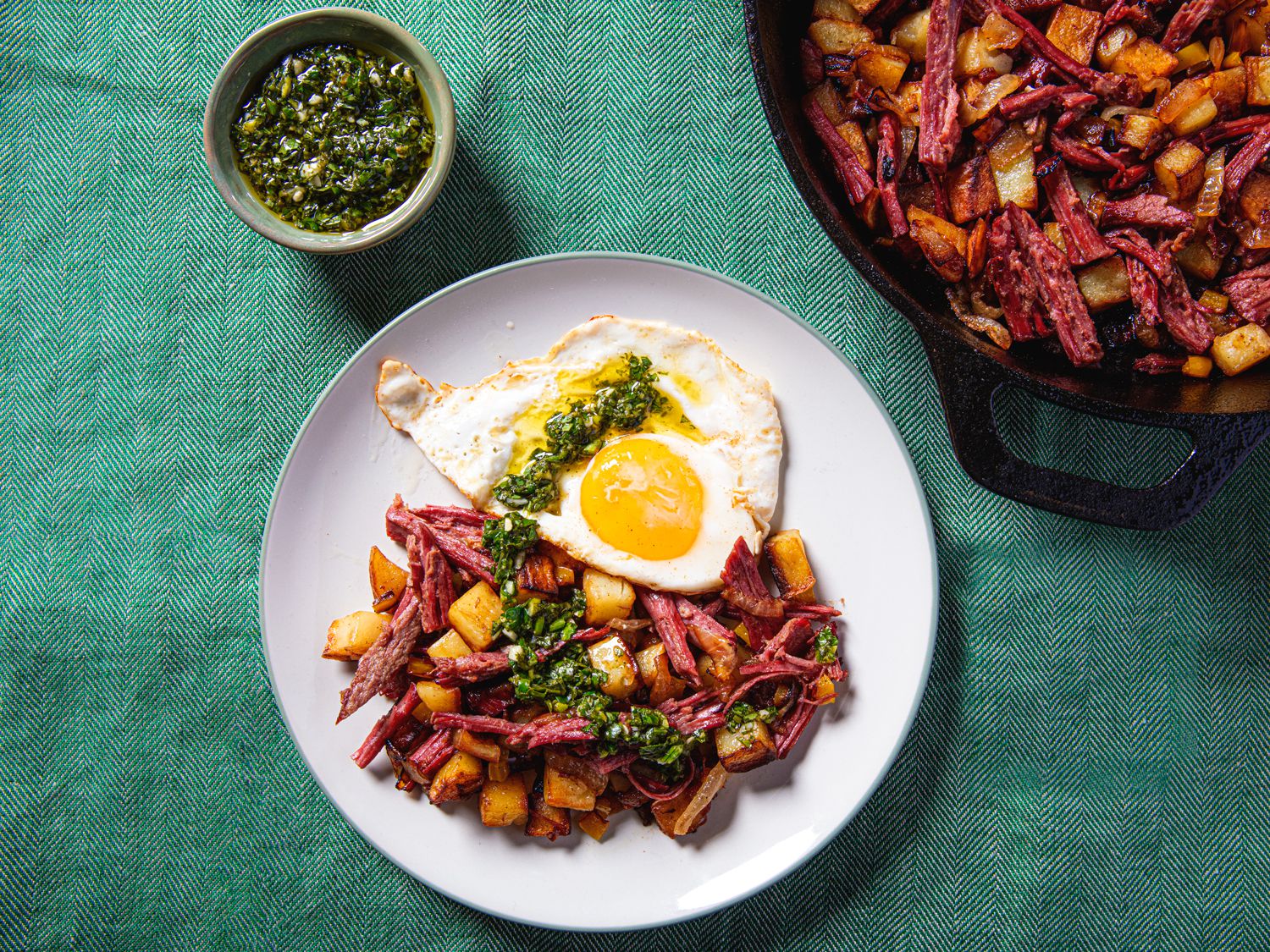 I love corned beef hash. Specifically, I love Libby’s corned beef hash, the melange of pink mush and unnaturally sturdy cubes of potatoes that you can buy in a can at most grocery stores and highway rest stops. As a kid growing up in India, there were few things that evoked the distant wonders of "American life" as magnificently as the cans of Libby’s my father would smuggle into the country from his trips abroad. Coca-Cola, sugary cereal, a Twix—all spoke to me of the United States in the soft tones you use with invalids and children, but a can of Libby’s seemed to yell, "This! This is what you’re missing!"

And what was it, after all? It was beef, for one thing, which we could not buy and consequently did not eat very often. But it was also those odd cubes of potatoes, along with a range of spices and seasonings that translated in the mouth to "a heck of a lot of salt." With a little good cooking technique, the beef and potatoes and salt could be transformed from pink mush to a dun textured mush. The most widely used technique, in homes and respectable diners alike, was and is to spread the mush out in a hot pan (doesn’t even need to be greased; the mush takes care of that) and let it sit until the pink goes brown in spots and the mush gets a little crispy. However, my father used a bit of canned food cooking wizardry and would inch the mush out of the can, slice it into hockey pucks, and then brown the flat sides of each puck as if he were some proto-Grant Achatz. Regardless of whether it was a pool of textured mush or pucks of textured mush, topped with an egg of any kind with a runny yolk, the stuff tasted like heaven, or at least it seemed to me to be the meaning made pink mush of the American expression, "This tastes like heaven!"

Of course, corned beef hash in a can is not the only form of corned beef hash, even if it is its apotheosis. Corned beef hash is just one entry in the long list of dishes that fall under the umbrella of "hash," which includes just about every preparation consisting of potatoes, onions, and some kind of meat tossed together in a hot frying pan. When I was a child, I did not know this, and my first introduction to a non-canned hash was a corned beef hash I ordered for breakfast at. a Howard Johnson’s somewhere in Massachusetts, when I and my father were touring colleges along the East Coast. "You’re not going to like that," my father warned, and he was, of course, correct, since he had brainwashed me into liking—no, loving…ecstatically—Libby’s weird and mushy facsimile. What I received was, in retrospect, a fine corned beef hash, made with beef that had been proudly cured in-house, but I couldn’t get past the spicing of the meat, which was heavy on what I now know were juniper berries, or its shredded, rather than mushy, texture.

The recipe below is for that kind of hash, a hash you make with leftover corned beef. I say leftover corned beef because unless you’re working in a Howard Johnson’s in Massachusetts at the dawn of the millennium, it isn’t likely that you’d make corned beef specifically for this dish. If you read that and are shaking your head, well, good for you! But for most people, corned beef hash is either a can of Libby’s or what you eat for three to four days after St. Patrick’s Day.

But what if you wanted non-Libby’s corned beef hash in April, or in May, or, as it happens, right now, in the middle of July? What if you want a corned beef hash that isn’t a delicious pink and brown mush, and you don’t want to go through the bother of curing a piece of brisket for 10 days and subsequently cooking it for three hours? To answer those questions, I tested this recipe using several types of corned beef from the grocery store: the vac-sealed packs of raw corned beef (which I then cooked myself); sliced corned beef from a deli counter; and the hot corned beef you can buy at the hot food station at a couple different grocery stores.

Needless to say, brisket you’ve corned and cooked yourself is the best corned beef to use in this recipe. But if you are compelled to use store-bought corned beef, it’s best to buy the cured but raw corned beef in vac-sealed bags and boil it yourself. The next best option is to use the hot corned beef from the hot food station. The sliced stuff from the deli counter? Just use that for sandwiches.

In terms of the form of the cooked corned beef, I found that my preference was for large, 1-inch shreds of meat, which were more interesting texturally than cubes of meat, no matter how large or small. So I shred the meat using my fingers, tearing off any large gobs of fat off the top and setting them aside. Once all the meat’s shredded, I dice up the gobs of fat and cook them before adding in the potatoes to the pan, so all that beef fat renders out and can help crisp up the potatoes.

While cubes of meat may not be texturally interesting, cubes of potato were a requirement, if only as a nod to the ne plus ultra corned beef hash Libby’s produces. We’ve done a fair amount of spud science around these parts, so producing cubes of potato that retain their shape even after being cooked thoroughly and tossed around in a pan was simple enough: Par-cooking them in acidulated water helps firm up the pectin in the cell walls, which means they remain firm even when tender. The choice of potato ended up simply being one that came down to preference: You can produce those hardy cubes using russets or Yukon Golds, although russets need to par-cook a little longer, about a couple minutes. I chose Yukon Golds for this recipe, as they’re creamier and sweeter, and sweetness seemed like a good quality to throw into a mix that contains bunch of shredded salted meat.

After they’re par-cooked, I fry the cubed potatoes in rendered corned beef fat, patting them into a single layer so there’s full contact with one side of each cube with the bottom of the pan, and let them sit, untouched, for a couple minutes. I then toss them around, flatten them down again, and repeat the process a couple times to try to get more than half of each cube’s flat sides browned and crisp.

A good hash has vegetables…they’re part of the hash! Libby’s? It does not. There aren’t even any dehydrated vegetables nodded to in the ingredient list. But a good hash has to have some vegetables, and onion and green bell pepper seemed like good choices to me, just to give it some flavor, but also some more sweetness.

One of the most appealing parts of a hash made at a diner is the little burnt bits of onion and peppers, the product of spreading the huge pile of hash out on a flattop and letting it cook. Some parts get burnt, while others are a little undercooked, with every stage of doneness in between, and this creates a kind of full spectrum of cooked onion flavor, from bitter and caramel-like to softly sweet. Recreating that in a cast iron pan was simple enough—just let some of it burn—but to do so in a way that was controlled and yielded a relatively consistent ratio of burnt bits to nicely cooked to undercooked bits was a little trickier.

I settled on some unconventional onion slicing as a solution. Instead of producing a fine dice or a large dice, I cut through a halved onion at an angle on either side, separating it into thirds. Then I slice it crosswise to yield a jumble of different sized onion cuts. Cooked in an ample quantity of butter, by the time the little bits get very brown and almost burnt, the larger bits will be a little undercooked. I remove the onions from the pan, fry the corned beef fat and the potatoes, then add the onions back to the pan along with the corned beef to cook further.

While I was committed to adding peppers, I didn’t want lengths of slimy peppers in the mix; a nice dice of peppers seemed a better option. Once they’re that small, though, they take only a couple of minutes to cook, and a minute more to char a bit, so I just throw them in after the potatoes are browned, but before the rest of the ingredients, and they steam and char a bit quite nicely.

Some Crispy Eggs and Some Zippy Condiment, To Serve

While I like to eat Libby’s corned beef hash with poached eggs, the better to create an almost completely homogenous mixture of mush, I like eating this hash with crispy fried eggs. There’s still a nice and gooey yolk to mix into the potatoes and meat, and the crispy whites play nicely with the crispy bits of potatoes, onions, and corned beef. While hot sauce is a perfectly acceptable condiment to pass alongside, I also like eating it with a basic chimichurri, which gives you the acidity of a hot sauce, and some heat (I like to spike mine with a few sliced hot green chiles), along with the uplifting notes of fresh herbs.

Combine potatoes, water, 1 tablespoon (9g) salt, and vinegar in a pot and bring to a boil over medium-high heat. Reduce heat to maintain a simmer and cook for 4 minutes; potatoes will still be quite firm. Drain potatoes and let cool for at least 15 minutes.

Melt butter in a 10-inch cast iron pan over medium-high heat. Once butter stops foaming, add onions along with 1/4 teaspoon (1g) of salt and stir to thoroughly coat onions in fat. Cook, stirring frequently, until larger pieces of onion soft and translucent and smallest pieces of onion are browning and threatening to char, about 4 minutes. Using tongs or slotted spoon, transfer onions to small bowl, leaving as much butter as possible in the pan.

Add diced corned beef fat to pan and cook, stirring frequently, until it renders all of its liquid fat and bits and pieces are very crisp, about 2-3 minutes. Using tongs or slotted spoon, transfer crispy bits to bowl with onions, leaving as much fat as possible in the pan.

Add diced green bell pepper to pan, toss with potatoes to distribute. Using the wooden spoon, pack mixture down in a single layer and cook, without stirring, until some pepper pieces begin to char, 2 minutes.

Add cooked onions, corned beef fat, and shredded corned beef, and toss to combine. Using wooden spoon, pack mixture down into the pan, being careful not to break up potatoes. Cook, without stirring, until shreds of parts of mixture in contact with the bottom of the pan become crisp and slightly charred, 2 minutes. Toss mixture before serving to distribute crispy bits more seamlessly into the mix. Serve immediately with crispy fried eggs and chimicchuri on the side.

You can use a russet potato, if you like, cut into the same dice. Adjust the parcooking time for the potatoes in Step 1 to 6 minutes.