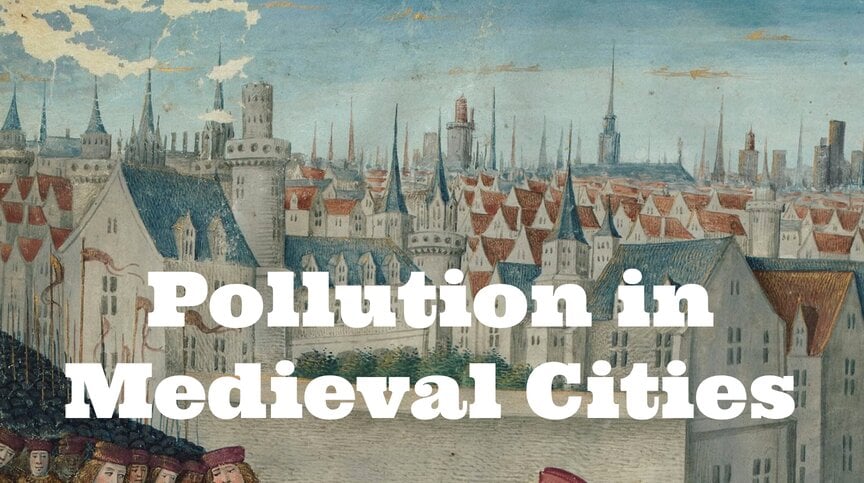 When poop and entrails filled the Thames.

The corruption of air and water was a public health concern for late medieval authorities. “Corruption” was caused by miasmas arising from decaying carcasses, plague bodies, or waste accumulating in the streets and water streams. Corrupted miasmatic air, medicine held, infected the human body, posing various health issues to entire communities. Ordinances framing public sanitation appeared in the twelfth and thirteenth centuries across European cities and spiked after the first wave of the plague, in the mid-fourteenth century. One of their goals was to limit the spread of miasmas in order, in turn, to limit the spread of diseases.

Many medieval cities had developed near and around large navigable rivers. But these rivers, like smaller streams and even the ditches, were often used by the inhabitants to get rid of refuse, not only of dung, but of all sorts of waste, and not only by the neighbouring houses but by most of the population. The air arising from waterways and waste piling up in the streets posed a grave threat to the population’s health, urban officials believed. Here we look at the two sources of pollution and corruption in medieval cities: first, the accumulation of human waste in the cities’ rivers and ditches; second, the sanitation problems caused by urban butcher shops.

Decades and decades of accumulated waste obstructed the streams and posed a threat of overflowing. North of the London city walls was a marshy area nicknamed “The Moor,” traversed by the Walbrook River, now an underground stream. The Moor was famous for its public latrines and, unfortunately, for the “horrible, infected, and corrupt atmosphere” arising from the common privies, which endangered the health of the nearby residents. By 1415, the river had become obstructed and could no longer carry away the refuse of the public latrines. The Moor was overflowing with dung and waste to the point that the neighbouring houses had become inhabitable.

Likewise, the Fleet ditch that ran alongside and underneath the London’s Fleet prison had become “so obstructed by dung from privies built thereon and other filth thrown into it as to cause reasonable fear of the escape of prisoners and a grave danger to their health by reason of the infection of the air and the abominable stenches.” The stenches corrupted the air, filling it with miasmas and creating sanitation issues.

In Coventry, the people had taken the habit of dumping their waste in the river Sherbourne. In 1421, the city council lamented that the river had been “stopped of his course” because of the filth and dung that people dumped in the stream. It was therefore prohibited to cast any sort of waste in the river, or fines would ensue. London had a similar issue with the Thames. In 1357, the city’s public authorities had forbidden their citizens to dispose of any sorts of waste into the Thames and the other streams under the penalty of prison time and “severe punishment” to be decided by the Mayor and Aldermen. But, by the 1370s, the Thames’s channel had narrowed down so much that it hindered the passage of ships.

Animals, too, lived in medieval cities and produced waste that filled the streets and the waterways. In 1332, Edward III’s chancery addressed a letter to the mayor and bailiffs of York in preparation for a parliament meeting there. In the letter, the king complained about “the abominable smell abounding in the said city more than in any other … from dung and manure and other filth and dirt wherewith the streets and lanes are tilled and obstructed” and ordered the streets to be cleansed before he arrived. In the 1370s, Gloucester had a stench problem due to dung heaps located near the castle door. In Coventry, it was prohibited to dump dung from stables into the Sherbourne River at the risk of a fine.

Dead animals and the remains of their processing – whether for butchery or tannery – posed another sanitation issue to urban authorities. Medieval science and medicinal treatises held that the smells and odours emanating from putrefied flesh corrupted the air and spread diseases. A Spanish plague treatise, written in 1348 by Jacme d’Agramont, stated that filthy cities were at risk of plague because the flesh, blood, offal and refuse of dead animals caused “great infection in the air”. Right from the plague, butcher shops became the target of a series of ordinances aiming at reducing the pollution they caused. In Pistoia, Italy, the Ordinances for Sanitation in a Time of Mortality, issued in 1348, forbade butcher shops that “give off a putrid smell” to open near a tavern, a shop, a stable or a pen. The point of the ordinance was to keep humans and animals away from the dangerous stenches.

Urban dwellers and butchers often turned to waterways to dispose of animal waste. But polluted waterways meant a transmission of miasmas to the air. In 1380, a complaint filed at Coventry stated that some people kept throwing animal wastes into the river, namely bones, hides and offal of oxen, pigs and sheep, which “corrupted” the water and was “infecting the air.” In 1371, a complaint sent from King Edward III to the Mayor and Aldermen of London focused specifically on the butcher’s waste issues. He wrote:

Whereas of late, by reason of the slaughtering of great beasts in the city aforesaid, from the putrefied blood of which running in the streets, and the entrails thereof thrown into the water of Thames, the air in the same city has been greatly corrupted and infected, and whereby the worst of abominations and stenches have been generated, and sicknesses and many other maladies have befallen persons dwelling in the same city…

The removal of polluting activities and waste from the inner city was instrumental in public sanitation measures. In Valencia, Spain, the city’s officials created in 1397 the office of malaropa, to collect and dispose of the bodies of dead animals “and other dead things that ill-mannered people are accustomed to throwing in the streets and squares and which bring stench and infection to the city”. Unfortunately, not all employees were hard at work. In 1503, one of them was fired because he “served so badly in his office that the whole city is full of dead cats, dogs, and chickens”. In London, the butchers of St. Nicholas Shambles were throwing butchery waste directly into the Thames. The Mayor and Aldermen of London declared, in 1368, that because of this “the water was rendered corrupt and generated fetid smells”. The city’s official recommended relocating their slaughtering business outside of the city, which the king agreed upon.

Rotten fish was sometimes at fault too. In 1390 London, a fishmonger had been disposing of rotten fish in a well. He was throwing so much bad fish into the well that “great a stench arose that the people passing there were greatly offended thereby”. The city’s authorities uncovered 12 more barrels of rotten fish in the man’s house, which were transported out of the city and buried in fear that “the air might become infected through the stench arising therefrom”.

The miasma theory directly connected waste and putrefaction to public health issues. It provided a great incentive to city officials to actively implement sanitation measures to improve the quality of water and the air. For instance, to prevent the complete obstruction of the London ditches, the city council issued a large array of public ordinances. For instance, dumping waste directly into the ditches was temporarily reserved for the people and institutions whose houses abutted the streams. They would pay 2 shillings a year to finance the cleaning of the waterway. But because this measure was not enough or because people did not follow the rules, in 1477 the city council forbade the construction of latrines over any of the city’s ditches and ordered the destruction of the existing ones. The issue of waste removal remained, as people and animals were still producing it, and as few alternatives to dumping waste in streets and waterways were offered to urban dwellers.