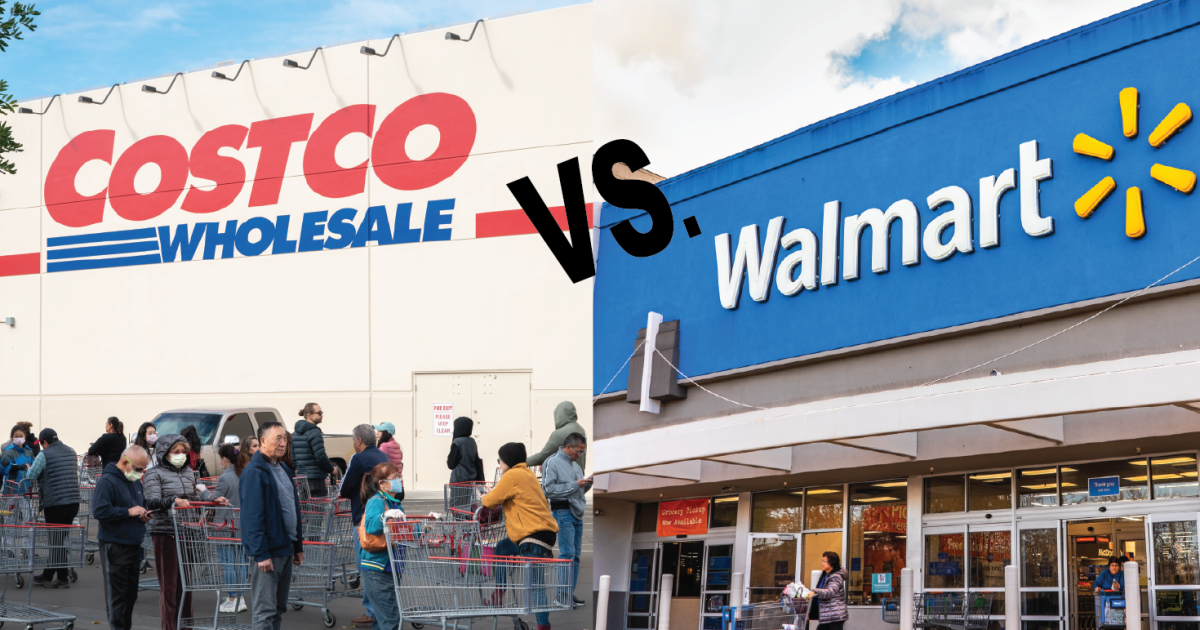 Costco and Walmart; the tale of two supply chains. Both of these global retail giants sell food, clothing and an array of other products. Their supply chains are vast and complex. They are some of the final brick-and-mortar businesses still thriving and standing up to ecommerce-only retailers such as Amazon. But along with their similarities, each company’s approach to sustainability highlights two very different ways of engaging their suppliers, particularly on Scope 3 emission reductions.

Walmart has been outspoken and press-happy about Project Gigaton, its plan to avert the release of a gigaton of greenhouse gases from the global value chain by 2030. The retailer has moved towards sustainable tuna suppliers and worked with HSBC to add science-based targets requirements to financing options for its suppliers. In its most recent report, Walmart concluded it avoided 186 million metric tons of emissions through Project Gigaton in 2020. Previously, Walmart has engaged suppliers with requirements on removing toxic chemicals from products, and it has targets to source 100 percent verified deforestation-free beef by 2022 and soy by 2023.

Costco, on the other hand, has been much quieter on its supplier sustainability plans. Whether this is due to lack of movement or a different press strategy is unclear. (Costco declined to be interviewed for this article). However, the bits of information that have come out about Costco’s plans aren’t very encouraging to shareholders, according to Thomas Peterson, a shareholder advocate with Green Century Capital Management, an impact investing fund.

In January, the company’s board opposed a shareholder proposal, led by the impact investing fund, for Costco to be more forthcoming about its greenhouse gas outputs and supply chain emissions. In a statement, Costco wrote in January : “While we seek and will continue to seek to influence our suppliers to reduce their emissions, we cannot directly control their actions.”

However, shareholders ignored Costco’s hesitancy and overwhelmingly voted for the proposal, with 70 percent in favor of adopting a more rigorous plan for decreasing its emissions.

Before the vote, Costco wasn’t planning on announcing its Scope 1 and 2 goals until December 2022. After this proposal was initiated in January, Costco shifted up its plan by 11 months. It accounted for and set reduction goals from Scope 1 and 2 in January, said it will disclose its Scope 3 emissions by December and is developing a climate action plan that will determine absolute Scope 3 carbon dioxide-equivalent emissions.

Because retail has historically been a competitive industry, it has been later than others, such as airlines and consumer packaged goods, to combine its power with inter-sector collaborations on sustainability, according to Simon Geale, executive vice president at Proxima, a supply chain consultancy.

For example, airlines including Delta and American have partnered with Deloitte to make sustainable aviation fuel purchases. Ten pharmaceutical companies have joined forces with Schneider Electric to accelerate renewable energy adoption and emissions reductions. There has even been movement from food and agriculture and personal care businesses with vanilla and palm oil purchasing agreements. PepsiCo and Schneider Electric also announced a collaboration to give value chain partner access to renewable electricity to help Pepsi meet its 2040 net-zero goal.

Costco’s reasons for being slower on tackling Scope 3 emissions are unclear, so I spoke to a few experts on supply chain emission reductions to unravel its strategy (or lack thereof).

Does Costco have the same influence over its suppliers as Walmart?

In the few public statements Costco has made about its supplier engagement, it emphasizes that it can monitor but not control suppliers.

Walmart, as the world’s largest retailer, has made it clear that it does have the power to influence. When Walmart says jump, suppliers ask how high, according to Geale.

“Walmart can take an industry-leading position and can encourage suppliers but also helps suppliers because of its scale, and suppliers are committed to do that,” he said. “Costco, on the other hand, doesn’t necessarily have the same purchasing power and influence over those brands, so Costco is unable to take a leading position in the sector.”

Experts such as Jorgette Mariñez, director of consumer sectors at BSR North America, think Costco should be able to sway suppliers. Take, for instance, that Target and Ikea have already made Scope 3 commitments. By 2023, Target wants 23 percent of its top 80 percent of suppliers to have set science-based reduction targets on their Scope 1 and 2 emissions.

Ikea is working on being “climate positive” by 2030, including by reducing the total climate footprint by an average of 70 percent per product, and it has a goal of reducing supply chain emissions by 15 percent compared to 2016 by 2030. It’s also expanding its impact by working with its suppliers on products outside of Ikea’s brand. Even William-Sonoma has a 14 percent reduction in Scope 3 emissions, compared to 2019 levels, plan by 2030.

“I think that any customer has an influence on their suppliers,” Mariñez said. “So whether I choose carrots or sticks, I think that every company has a certain amount of influence.”

Is it OK for Costco to be a fast follower?

Even though the world’s economies are quickly emitting the 440 billion tons of carbon dioxide left in the carbon budget in order to limit planetary warming to 1.5 degrees Celsius, there are valid reasons for some retailers to wait and follow the lead of others, according to Geale. Carbon crediting markets are confusing, standards are varied and engaging suppliers is hard and complicated, he said. If Costco decided to follow in the path of a competitor, such as Walmart, instead of creating its own, there is value in that, he added.

“And at the moment most of those markets are very immature,” Geale said. “There’s a skills scarcity, there’s a tech scarcity. The technology hasn’t really caught up. A lot of the more innovative solutions aren’t in place. So there is a valid decision about whether to be pioneers or followers.”

However, Walmart started Project Gigaton in 2017, more than enough time for Costco to start copying that trajectory. And as Peterson noted, we shouldn’t praise companies for waiting to take climate action.

Costco’s shifting supplier base is a challenge

Anyone who has shopped at Costco at different times of the year has seen different products on the shelves each time. Unlike Walmart, with its more consistent lines of products and therefore more stable supplier relationships, Costco’s varying inventory means its supply chain is constantly shifting.

I think we still see quite a significant lag between where Costco are, and where their peers are, that can’t be explained by that idiosyncrasy of the business model.

This can make engaging suppliers in long-term sustainability projects more difficult for Costco, according to Peterson. And there’s much less incentive for a rotating case of suppliers to align with a retailer’s sustainability expectations.

“It certainly adds nuance to the picture,” he said. “But I think we still see quite a significant lag between where they are, and where their peers are, that can’t be explained by that idiosyncrasy of the business model.”

A place where it would seem Costco would have more control and stable supplier relationships is in its private label brand, Kirkland. But Costco, like Walmart, considers its private label to be part of Scope 3; after all, most retailers work with white-label partners to bring their private labels to life and do not own the manufacturing facilities for those products. Walmart, however, used its brand power to push its tuna private label into using sustainable fisheries, another indicator of its willingness to influence suppliers.

Does Costco know more than we think?

Just because Costco has been press-shy doesn’t mean it doesn’t know what’s happening in its supply chain. In fact, according to Mariñez, the knowledge might prevent the warehouse giant from being forthcoming. If Costco has done an in-depth analysis of its supply chain, it might know where its biggest Scope 3 emissions are and that it can’t tackle them, she explained.

“If Costco has already done a certain level of due diligence and are seeing more barriers that might be part of the reason why they’re not overcommitting,” she said. “Some companies just really don’t want to say anything until they know exactly the path and exactly what it is going to cost, and are already two-thirds of the way there.”

Even though Costco’s press strategy may obscure its activities, in some ways the company is more transparent than Walmart. Costco provides detailed reports on its Scope 1 and 2 plans, and in terms of deforestation, it lists the products — including Kirkland brand bath tissue, paper towels, napkins, parchment paper — and the percentages of them certified by the Forest Stewardship Council, the Sustainable Forestry Initiative and the Programme for the Endorsement of Forest Certification. The retailer also reports the amounts of its organic waste converted into biofuel or fertilizer, unlike Walmart. By contrast, Walmart’s sustainability hub has much more information about emissions goals and targets than it shares about metrics on its products.

What is Costco’s plan?

Besides the changes to Scope 1, 2 and 3 reporting and the acceleration of the Climate Action Plan that Costco implemented after the shareholder vote in January, the company has outlined other sustainability and emissions plans on its website.

The retailer is purchasing renewable energy toward 100 percent renewables by 2035, and is phasing out HFCs and investing in retrofits to reduce refrigerant global warming potential. For its overall goal, Costco is committing to an annual 2 percent per year reduction in global Scope 1 and 2 carbon emissions, which should lead to a reduction of 45 percent by 2035 from a 2020 base year. This is less aggressive than Walmart’s target of absolute zero emissions (not using offsets) for Scope 1 and 2 by 2040. And while Costco’s Scope 1 and 2 goals are slightly more aggressive than Target’s plans to reduce Scope 1 and 2 by 30 percent below 2017 levels by 2040, Target also included a goal of reducing Scope 3 by 30 percent by 2040.

There is a long-held assumption popular in corporate sustainability circles that if a company spoke up about its sustainability plans it would be slammed for not doing enough instead of praised for its changes. With this thought, many companies have decided to stay quiet, possibly as Costco is doing. According to Peterson, that’s changing, however, as more consumer and business customers as well as investors start asking businesses to detail their sustainability efforts.

“The absence of communication creates the space for people to make up [things] and make assumptions,” Mariñez said. “And so without communicating, we just don’t know.”